What can rile the Council? The candy ban can 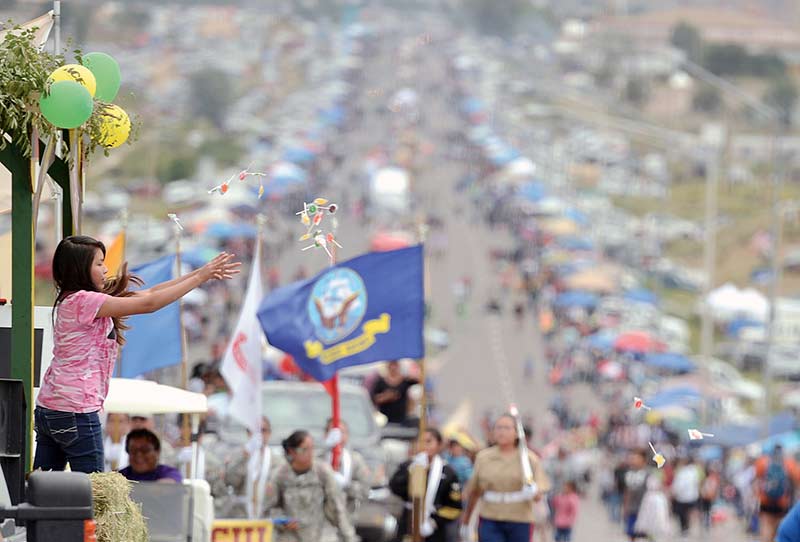 In solidarity, 15 members of the 24th Navajo Nation Council opposed Navajo Nation President Jonathan Nez’s parade candy ban because the parade happens “only once a year.”

Council Delegate Herman Daniels motioned to suspend floor rules during Thursday’s Naabik’iyati meeting in order to give his report on concerns over Nez’s memo stating the 73rd Navajo Nation Fair’s parade would be a candy-free event.

“It only happens once a year,” said Daniels. “Our Navajo people look forward to it. We don’t eat candy 365 days out of the year, only once a year.”

In a widely circulated memo, Nez and Vice President Myron Lizer stated they were “proud to announce” the parade would be candy free for the health and wellness of children, elders, friends, visitors and many others, and said participants are prohibited from distributing candy and other unhealthy food or beverages.

“By replacing candy and other unhealthy foods and beverages with fruits and vegetables, water, and other healthy items we can begin to create a positive change by working together,” stated the memo.

Council Delegate Eugenia Charles-Newton fervently agreed with Daniels and said that Nez had no authority to implement a candy ban. Nez needs to stop micromanaging parents, she said.

“We have so many issues on the Navajo Nation, issues the Navajo Nation President hasn’t addressed,” said Newton. “I’m for passing out candy. As a parent you monitor your children; that is your responsibility.”

Council Delegate Mark Freeland said they had a good discussion about this during the Resource and Development Committee meeting, and he said his favorite childhood memories are getting candy during the parade.

“I think of all the Navajo kids growing up like I did economically disadvantaged,” said Freeland. “Struggling single parents to give their kids a little excitement … joy for just a moment to get one piece of candy.”

Legislative Counsel Ed McCool found a loophole to a signed participant’s waiver of liability given to participants by the fair committee stating no candy shall be thrown from the floats. It did not prohibit walking in the parade from distributing candy.

“You are not in violation in distributing candy in the parade as long as its consistent with the limitations that legislative branch agreed to,” McCool said.

Nez was attending the Ashkii Happy Kids/Elderly Day events when he heard of Naabikyati’s decision to disregard the candy ban, and said he believes it’s just a way for the Council to flout his authority.

“We all got elected to get out of the old politics,” said Nez to the Times. “But it seems to me that the old politics of authority is at the forefront of all of this. We forgot the health and well being of our Navajo people.”

In response to Charles-Newton’s contention that there are bigger issues to confront, Nez listed different illnesses such as diabetes and heart disease that are exacerbated by obesity.

“If there is one out four Navajos who have diabetes that means someone in our immediate family has diabetes and that’s not being debated,” said Nez. “Its all about authority. Seventeen of those delegates were elected to get away from the old politics. We’re getting back into that old rut.”

“Clearly they took under advisement my memo,” said Nez. “And they put that into the rules. If they’re going to hand out candy then they’re not following the rules. We were just on Native America Calling and this candy ban had a unanimous support from all over the country and other tribes wanted to emulate this.”

Former Speaker LoRenzo Bates said this candy-ban discussion would never have been discussed on the Council floor if it were to brought up during his term. He said he would have sent a memo to the President stating the Council disagreed with it, but would have reserved Council debate for bigger issues.

He also said while Speaker his office gave out sheepherder’s baskets, with no candy and water instead of soda. Although some delegates may have brought their own candy to distribute, his office did not.

“Everybody was always throwing out candy and we didn’t want to contribute to that,” said Bates. “There was more than enough candy. So we wanted to be doing something different.”