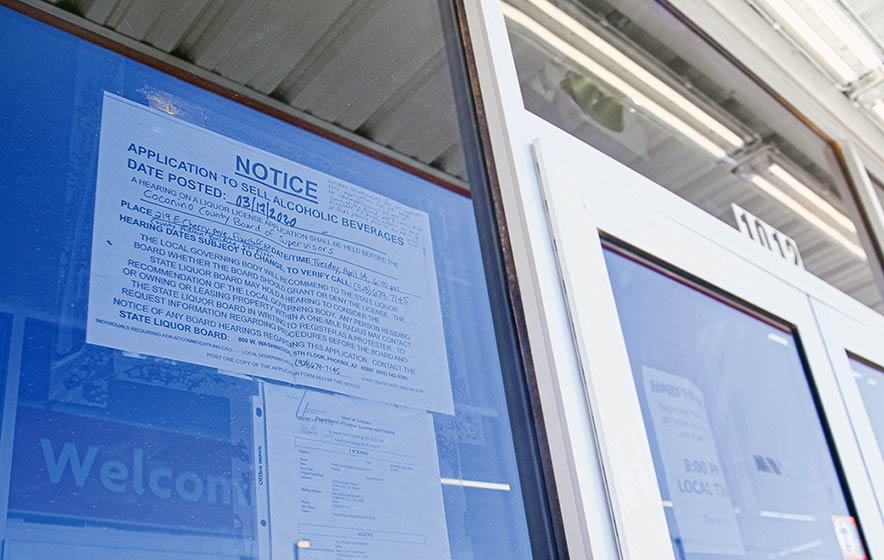 Special to the Times | Krista Allen
A notice regarding an application for a liquor license was posted at Family Dollar located on Main Street in Tuba City on March 17.

A notice of an application to sell alcoholic beverages was posted two weeks ago outside Family Dollar on Main Street, causing an uproar among local leaders and the community.

The notice – saying a hearing on a liquor license application will take place before the Coconino County Board of Supervisors on the evening of April 14 at the county administration building – was posted March 17.

The store’s manager, a young woman who did not want to give her name, declined to comment and referred questions to Family Dollar’s media relations. But a source familiar with the plan said the company’s district manager came and posted the notice.

The source said the liquor would be kept where the cigarettes and tobacco products are currently stocked. Family Dollar was purchased by Dollar Tree in 2015 for $8.5 billion, after a yearlong struggle that drew in antitrust regulators and rival bids. And so far, it has been a disappointing run.

Dollar Tree, a budget-friendly store, announced on May 30, 2019, that the company plans to sell adult beverages in 1,000 Family Dollar locations across the country. This is part of a broader plan to generate more business. Family Dollar, which has more than 8,000 stores nationwide, introduced sales of adult beverages at 45 stores in the first quarter, according to the 2019 Dollar Tree news release.

“Any person residing or owning or leasing property within a one-mile radius may contact the state liquor board in writing to register as a protester,” it states.

In 2008, the council amended the code again to authorize transportation, sale, delivery and consumption at authorized casinos on Navajo land. But Family Dollar, located at 1012 N. Main St., is on an island of private land in unincorporated Coconino County.

This means that it falls within the county’s jurisdiction to have a public hearing and offer recommendations to the Arizona Department of Liquor Licenses and Control, Lindsay Daley, clerk of the Coconino County Board of Supervisors, told board chairwoman Lena Fowler in an email on March 12. Fowler then forwarded the email to Tónaneesdizí officials on Sunday, March 15, just days before the notice was posted at Family Dollar.

Title 4 (alcoholic beverages) in the Arizona Revised Statutes is specific about what written statements for or against the application should include. Written statements should contain the person’s complete name, street address or post office box address, and written or electronic signature.

Daley said if no hearing is requested by John Cocca or by any aggrieved party, the application may be approved by the director of Arizona Department of Liquor. If the recommendation by the board of supervisors is for disapproval of an application, the Arizona Liquor Board will hold a hearing.

“We want the community’s feedback and (to) see where they stand,” said Mike Sixkiller, the community events coordinator and the Western Navajo Fair manager. “We have 20 days.”

The deadline for comment submission is Monday, April 6. “And then we want to know who owns the store,” said Nelson Cody Jr., a planner for Tónaneesdizí Local Government and also a concerned member of the community. “We kind of got a name and an address, but we don’t know who’s actually behind the scene,” said Gerald Keetso, president of Tónaneesdizí Chapter.

The Tónaneesdizí Local Government also launched an online survey asking for feedback on the Family Dollar liquor application. The local government also received dozens of comments on Facebook after the survey was launched. “What we want to know is what the people think,” said one chapter official. “We want people’s comments … particularly in a one-mile radius.”

Councilor Angie Williams, in the community’s Council of Naat’áanii, said the impact is within a one-mile radius of Tuba City.

Written statements can be sent to: Coconino County Attention: Lindsay Daley, Clerk of the Board 219 E. Cherry Ave. Flagstaff, AZ 86001.