Riding it out: COVID throws rodeo season for a loop 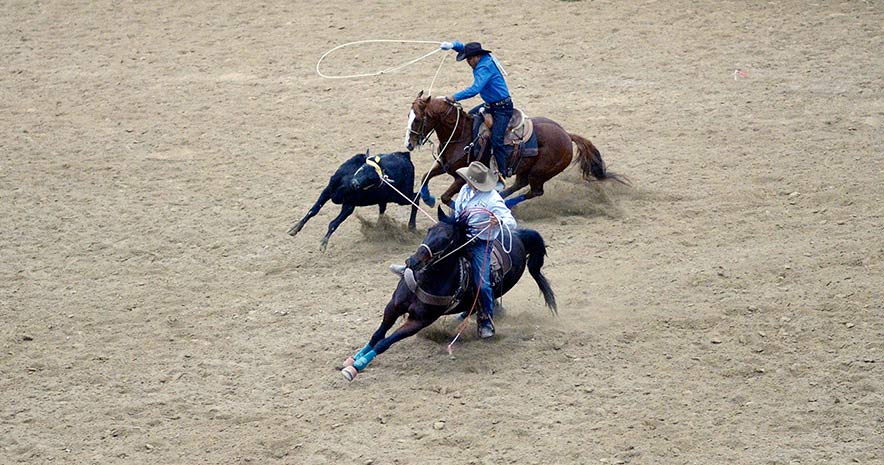 In his 40-plus years of rodeoing, Alvin Smith has not experienced anything like this.

As the president of the Navajo Nation Rodeo Association, Smith is trying to navigate its members through the COVID-19 crisis.

“This virus has hit everyone hard and it’s nobody’s fault,” Smith said in an interview with the Navajo Times on Monday. “I’ve talked to (stock contractor) Charley Willie the other day and we’ve never seen anything like this.”

Smith said the rodeo circuits in the area have dealt with things like tuberculosis and Hantavirus in the past but nothing of this magnitude as all public events are bowing down to the stringent measures in place to help contain the highly contagious disease.

As of press time, the novel coronavirus has affected more than 189,000 people in the United States, including 174 positive cases on the Navajo Nation.

“We don’t know what’s going to happen,” Smith said, while noting that the PRCA is also being affected.

Locally, he said the pandemic is affecting contestants, stock contractors and rodeo committees in a huge way as the NNRA had to cancel or postpone five rodeos for the month of March and April.

Smith said he’s afraid that a handful of contestants are going to have a tough time making ends meet with rodeo being one of a few means of generating an income for their respective households.

“They’re kind of freaking out,” he said, while adding that the local stock contractors are also hurting.

With no income coming in, Smith said the stock contractors are taking a hit when they have to purchase hay and feed as their animals are sitting idly.

“That’s their bread and butter,” he said. “It’s hurtful for everyone.”

As for the rodeo committees, Smith said some of their sponsors are starting to back out.

To help the best way he can Smith said he’s sending out prayers and he’s asking the NNRA members to be vigilant and obey the shelter-in-place orders placed by Navajo Nation President Jonathan Nez.

“The best thing we can do it wait this out,” he said.

“We had proposed to have these two tour rodeos on back-to-back weekends but we lost both of them,” the NNRA president said. “Those two rodeos were a huge deal for us.”

Per the INFR, each regional affiliate is required to host at least one tour rodeo that has an added purse of $20,000 with each event receiving $2,000 each with the exception of team roping, which gets $4,000.

He said the township of Socorro and the rodeo committees from Page were going to take care of the tab but with the cancellation of those tour rodeos the NNRA will have to pick up the cost of hosting one at a later date.

Smith said he’s not sure when the association will put together a tour rodeo but he’s open to host the event as late as September and, perhaps, coinciding with the Navajo Nation Fair at a different site near Window Rock.

“That’s an option that I’m going to propose to the board,” Smith said. “We can try to host a time-event tour rodeo during the fair and the following week we can probably put up a tour rodeo for the rough stock events.”

Smith said there are other options on the table and he’s looking forward to discussing them with his board members, which include Vice-President Ray Smith, Secretary/Treasurer Shawndeana Smith, Administration Liaison Darlene Thomas and Rodeo Representative David Peshlakai.

But with tribal restrictions in place on public gatherings, Smith said he had to cancel a meeting last week.

He’s hoping to reschedule another one during the week of Apr. 20.

“We’ll see what happens because everything is in limbo right now,” he said, adding that there is no timetable on when they’ll host their first rodeo this season.

“We haven’t had a rodeo yet so I’m kind of worried about that,” he said.

Nonetheless, Smith said he’s had some conversations with a number of people about putting together a string of rodeos in August to meet the INFR bylaws of having at least six rodeos and one tour rodeo.

“We’re in contact with the INFR and they’re telling us to wait it out,” he said.