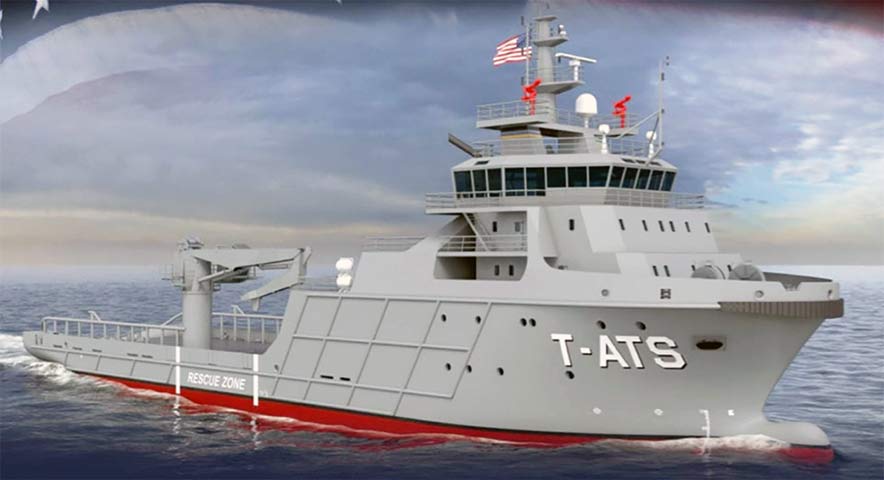 Courtesy Gulf Island Shipyards, LLC
An illustration showing what the USNS Navajo will look like. The ocean tug and rescue-salvage ship is scheduled to be completed in March 2021.

An official ceremony that will mark the beginning of the construction of the USNS Navajo, thanks to the efforts of the late U.S. Sen. John McCain and the 22nd Navajo Nation Council’s Naabik’iyáti’ Committee, is set to begin on Oct. 30 in Houma, Louisiana.

An “authentication of the keel” ceremony, which is a formal recognition that celebrates the start of a ship’s life, will be held at the Gulf Island Shipyards 28 miles north of the Gulf of Mexico.

The USNS Navajo is a T-ATS ocean tug and rescue-salvage ship that will become part of the U.S. Naval Fleet.

With the support of McCain, who chaired the U.S. Senate Committee on Armed Forces, along with then-Secretary of the Navy Sean Stackley, a resolution was passed by Naabik’iyáti’ in November of 2014 to support the ship naming.

The boat is one of eight tug-and-salvage ships the Navy plans to build beginning with the USNS Navajo.

“The naming of the first ship essentially names the entire class of ships,” stated the 2014 Naabi resolution. “So if the first T-ATS ship was named the ‘USNS Navajo,’ all of the ships would be referred to as the ‘Navajo class’ of ships.”

The boat is a new class of vessel that will be based on existing commercial towing offshore vessel designs. It will replace the current Naval ships that in service with the U.S. Military Sealift Command.

When former Miss Navajo Jocelyn Billy-Upshaw was chosen to be the ship’s sponsor, which meant having a lifelong relationship with her and her crew, she said she knew the Navajo culture had to be included into the role of the Naval ship.

So she went to work on how she could envelope the project with Navajo life and culture. As sponsor, she will etch her initials into the ship’s keel plate to verify that it has been “truly and fairly” laid.

Billy-Upshaw said on Wednesday morning from her home in Phoenix that her role in the Oct. 30 ceremony was one she is taking humbly.

“I am doing my best to make it inclusive and about the real reason – Navajo veterans,” she said. “I have two uncles who are Army veterans, one aunt who is Army veteran (Desert Storm, Iraqi Freedom), my maternal grandfather was a WWII Navy vet who later joined the Marines.”

She said her ex-husband, being a Marine Corps veteran, was another reason she decided to take on the task of becoming the ship’s sponsor.

Billy-Upshaw added the Navajo Nation Council was already working on a crest for the ship.

She said it was decided the design of the crest needed to illustrate Navajo culture, so the original motto, “Keeping A Steady Strain” would not quite work.

“It was agreed the motto should be in the Navajo language to capture the culture and legacy,” Billy-Upshaw said.

So, she, her family and Navajo Navy veterans camei up with a number of mottos written in Navajo like “Keyah doo iina yich’á indaabah” – “to serve to protect the land and way of life” – and “Tałkaa Silao Tsoh ast’aa yiniił” – “military rescue warrior.”

The crest itself was designed to include an illustration of a na’ashǫ́’ii dich’ízhii, more popularly known as cheii, or horned toad. Cheii is depicted in the middle of a shield with the Navajo motto underneath it.

Billy-Upshaw said the Navajo Nation Department of Historic Preservation worked with the Council and the Navy on the design.

Billy-Upshaw said the motto captures the Navajo cuture and legacy.

“We believe this to be appropriate considering the Navajo Code Talkers’ legacy,” she said. “In this grand pursuit, we attempted to marry our Navajo tradition that has motivated our leaders and warriors since time immemorial with that of the expectations of the U.S. Armed Forces.”

As the sponsor of the ship and beginning a relationship with the boat and her crew, Cofer said Billy-Upshaw’s ties would be forever.

“Sponsorship represents a lifelong relationship with the ship and her crew,” she wrote on Wednesday. “While this bond begins with the ship’s christening and the initial crew, it will ideally extend throughout the ship’s service life and even beyond.”

Two Navajo Code Talkers, Thomas Begay and Peter MacDonald, will attending the ceremony. Also in attendance would be former Council Delegate Jonathan Hale, who was the sponsor of the 2014 resolution, Seth Damon, speaker of the Navajo Nation Council, President Jonathan Nez and Chief Justice JoAnn Jayne.

Secretary of the Navy Richard V. Spencer said in a March 2019 statement the ship was named “Navajo” because “the Navajo people have fought and served our armed forces with honor and valor.”

“So it is fitting and right to name a new class of ship in their honor,” Spencer stated. “The Navajo class of towing, salvage and rescue ships will serve our nation and continue the legacy of the Navajo people, and all Native Americans.”

Seven additional vessels will be named in honor of prominent Native Americans or tribes.

The cost for the ship will be $63.5 million. The USNS Navajo is expected to be completed in March 2021. No date was announced on when she will be ready for service.

Billy-Upshaw said through “faith and prayer,” and support from her family, work, Diné Development Corporation, veterans, and the tribe, she was planning on making annual trips to wherever the boat would be in service.