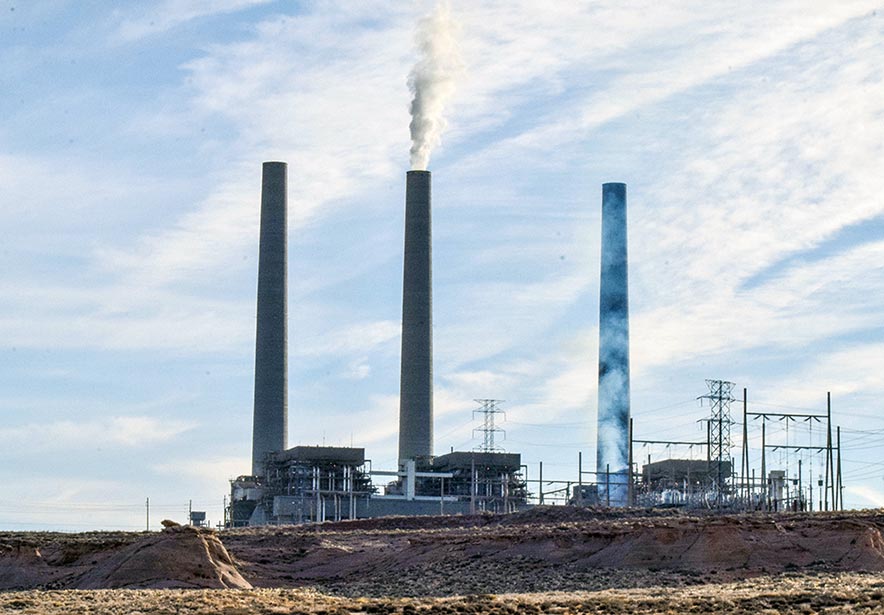 The city of Page, the Navajo Nation, and the Hopi Tribe are now dealing with economic repercussions of the Navajo Generating Station shutdown.

When Salt River Project, operator of NGS, and the participants announced on Feb. 13, 2017, they had voted to close the power plant at the end of 2019, the community of Page and both tribes knew the closure would be disastrous for their economies.

SRP permanently shut down the three units of the plant on Nov. 18, 2019. Since then, there has been a gnawing sense of despondency and anxiety in the Page-Lake Powell area where the closure has not only affected NGS and Kayenta Mine employees but also has impacted schools, Page Hospital, businesses and the libraries in Coconino County, among others.

“This is serious,” U.S. Rep. Tom O’Halleran, D-Ariz., said. “These impacts that we see here in Coconino County – what we don’t see here are families and the impact on families.”

When Rob Varner, superintendent for Page Unified School District, started his job five years ago, student enrollment was around 2,650. Today, the enrollment f is 2,530, a 4.53 percent decrease. But the data constantly fluctuates.

“Tomorrow, two kids could come in, three kids could leave,” he said. “And the data would be different.”

There are six schools within PUSD, which covers 1,800 square miles, including five northwestern Navajo Nation chapters. The student population within PUSD is 81 percent Native American, with at least 16 tribes represented. And of that population, 179 students have parents working at NGS.

“We have seen a slow trickle of folks leaving,” Varner said. “And one thing I want to say about the NGS students is they are one of our higher achievers.

“You see indirect students (extended NGS families), another 100,” he said. “About (11.02) percent of our (entire student) population are related to those working at NGS.

“A lot of our students, they don’t live with their parents,” he said. “They live with their extended family – aunts and uncles. So almost 300 kids are impacted by NGS. And we’ve seen a slow drift over the last three years.”

PUSD has lost $772,334 in revenue since the plant closed. This is due to student loss and cash inflow, said Varner.

“When you go out for funding such as (federal) Impact Aid, federal funding, and state funding, you’ve got to put in your average daily membership,” Varner explained. “As that starts dwindling off, that’s less money into our schools. We’ve lost teachers (and) our class sizes probably will take up some.”

The average daily membership is a count of students taken at different times of the year to satisfy local, state and federal data needs and also to ensure that school districts are adequately funded according to student population.

PUSD employs 405 members of the community. Because NGS is no longer in operation, PUSD is now the No. 1 employer in the Page-Lake Powell area. The average teacher salary is $54,000.

“When you throw benefits and other things in there, you’re looking at about $75,000 on average,” Varner said. “And there are paraprofessionals and we’re constantly giving them raises as well. They are fully benefited as well.”

Varner said he, along with other PUSD officials, started exploring a bond capacity five years ago and made a list of 47 items they needed to address as a unified school district.

PUSD bond money is dedicated to renovating and maintaining schools, including upgrading technology and school buses – with the goals of increasing safety, efficiency, and general support of programs, services, and school activities – within the district.

“The bonding capacity at that time (2015) was $34 million,” Varner said. “Since the loss of NGS, now we’re down to a bonding capacity of $15 million. So we couldn’t even come close to meeting the needs of a bond if we did. The (Arizona School Facilities Board) has been helpful to us with replacing some roofs and our alarm systems, but we have a lot of other facility needs.”

Varner added that about 300 students will leave PUSD, which means a loss to the Page community, a loss of PUSD staff, and a possible loss of afterschool programing and extracurricular activities.

Page Hospital CEO Susan Eubanks said she has seen a decrease in revenue at the hospital, which decreases the facility’s access.

“Therefore, it decreases the amount that we get … compensated with,” Eubanks said. “Also, taxation that we’re able to get (over $500,000) from NGS, which makes up about one-third of the total amount of tax that we (used) to collect ($1.5 million per year).”

Eubanks said the hospital – a level IV trauma center – was built by the Glen Canyon Dam in 1960 and then it was given to the city of Page, which poured about $10 million into building the current hospital. In fact, the hospital was constructed of the same cement that was used to construct the dam.

“So, any kind of fixing is not easy because it’s really thick walls,” Eubanks explained. “When a hospital board was (first) created, the city gave it to the board, and they have been taking care of it since.”

As a result, the board is the key decision-maker on whether the hospital will buy a new CT scanner or modify the hospital’s pharmacy department.

Eubanks has been at Page Hospital for six years, during which time the pharmacy has been modified twice to stay up to date.

“But I’m so proud of what we do,” Eubanks said. “It’s amazing to me and I would never want to have it be closed. In order to stay a level IV trauma center, packaging people up and getting them to a level I, you have to be able to spend money.”

Eubanks said the hospital board has already postponed remodeling plans for the hospital’s medical-surgical and surgery department due to cost and seeing how the loss of NGS would impact the Page-Lake Powell area.

“I can look and say it’s happening right now, it’s one-third of our annual budget,” she said. “Things cost a ton in medical care.”

For instance, one intensive care unit bed at the hospital has a price tag of $130,000. And the hospital’s new CT scanner that was purchased last year was $500,000.

“We’re upgrading the pharmacy so that we can produce chemotherapy and keep our oncology patients here in town,” Eubanks said. “So, that’s one addition that didn’t cost that much. However, bringing the pharmacy up to the grade it needs to be is about $2 million.

“Again, (NGS) really does have a huge impact,” she said. “I’m hoping that we won’t see a big exodus, but it does make a huge difference.”

Voters within the Page Hospital District, which includes at least eight northwestern Navajo chapters, in November voted to continue a tax levy (Proposition 431) that supports the hospital.

“Ninety-seven percent voted yes,” Eubanks added. “I’m really happy to tell you that one-third of our votes came from the Navajo Nation.

“Some of the stories I heard while I was out rallying on the Navajo Nation was the impact of the NGS closure,” she said. “A lot of it had to do with the Kayenta Mine that we don’t think about so much as a whole. It’s’ not just the plant, it has a huge impact on a lot of people.”

“The oncology (plan) was almost there,” Edwards added. “And that’s what is so sad – that we’re not going to be able to provide the residents of this area the type of services they should be provided.”

When talks of the NGS closure first started, Colleen Smith, president of Coconino Community College, talked to SRP about the possibility of developing some re-careering programs and a center for several of the regional colleges and universities to work together to provide higher education for people who were laid off from the plant.

“I was encouraged to write a grant to SRP, but we didn’t receive anything, and we never received notice that we weren’t receiving anything,” Smith said. “We just wanted to provide good training. And I was working with (Coconino County District 5 Supervisor Lena Fowler) who was trying to help everyone.”

Though CCC did receive some plant equipment to use for education.

“But you need to know, along the way the things we’ve tried,” Smith said. “I’m adamant that we do not close (CCC’s Page Instructional Site) but that we continue to work to solve problems, be innovative and figure out how to provide more education up here in the northern part of our county. And we’ve been working with a lot of people to try to do that.”

CCC has three campuses – two in Flagstaff and one in Page – and has been covering 18,000 square miles since 1991. CCC serves about 9,500 students annually. Smith said 75 percent of CCC students are full-time students who have jobs. And 20 percent of the CCC student population is Native American.

But that percentage isn’t the same for the Page Instructional Site, said Kay Leum, executive director of extended learning at the Page campus, where 85 percent of the student population is Native.

Smith said that’s huge because nationally it’s considered appropriate funding for a community college to get one-third of its funding from the state.

“One-third of the fund comes from local property taxes and one-third of the fund comes from tuition and fees,” Smith explained. “So, with these massive cuts – the cuts have affected CCC more than some colleges because we depend … on those funds: state appropriations because of our tax rate being so low (46 percent), far below the next (highest) one.”

Smith said because the tax rate is so low, those cuts in state appropriations really impacted CCC.

“It makes a difference in the things you accomplish … and I’m very proud of our college,” Smith said. “I think we’re good stewards for public funds because I think we’ve accomplished a lot with very little.”

“The effect of recession and cuts that all started in 2008 were massive,” Smith said. “Since then, we’ve seen significant increases in tuition and fees at our college. There were major cuts to classified and professional tech staff. Therefore, loss of programs, reduction in the number of students in the nursing program. (CCC) almost lost the program but instead cut it in half – many cuts.”

And the Page Instructional Site nearly closed. Fowler convinced CCC officials to keep it open. The Williams campus, however, closed its doors.

“Instead of closing the (Page campus), CCC just cut everything to the bone,” Smith said. “But I understand why that was done. It doesn’t mean I agree. I understand.”

CCC has only 41 full-time faculty positions appropriated for its budget. Smith says that’s not enough. There are also some part-time faculty.

Smith added that if CCC loses the $597,813, the board will have to make some decisions a little like what happened in 2008.

“But I’m not saying these are the decisions they (CCC board) would make,” Smith said. “If we were to increase tuition to the amount that it would take to cover this loss, it would at least be (an extra) $10 per credit hour, which would be $300 more in tuition for students who are already paying the highest tuition in the state for community colleges.”

Smith added that she’s strongly against closing the Page Instructional Site and that the board is trying to find ways to keep the Page campus open.

“We did get some one-time money this year and one of the things we have been wanting to do is really support this campus (for new programs).”

Three of those programs are a marine technology maintenance program, a hospitality program, and a tourism program to serve the area.

“And everything we’re doing, we’re trying to bring our people home and keep them here, keep families together and strengthen our communities,” Fowler said. “When we talk about our communities. We don’t think about just Page or just LeChee, it’s all of us together.”