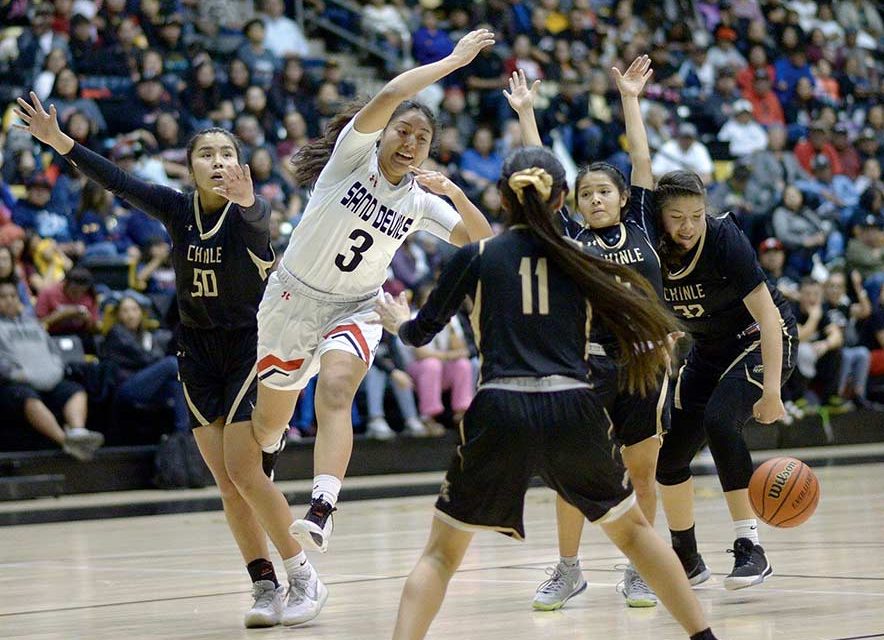 Navajo Times | Donovan Quintero
Page Lady Sand Devil Emma Yazzie (3) loses the ball while driving the ball for the ball against Chinle Lady Wildcat Lashante Benalley (50) and her teammates on Friday at the Wildcat Den in Chinle.

The finals of the 3A North Regional girls’ basketball tournament will pit the two best teams in the conference.

Page, the tournament’s No. 1 seed, also opened up a double digit lead in the opening half to score a 43-33 win over No. 4 Chinle.

Chinle and Tuba City will start today’s slate of games with the third place match at 10 a.m. while Page and Ganado will lock horns in tonight’s title tilt, which is scheduled for 5:30 p.m. at the Wildcat Den in Chinle.

Despite winning by double digits, Page coach Ryan Whitehorse felt that the Wildcats tested his squad.

“We needed this, going into the postseason,” he said. “We knew what Chinle was capable but we played them tough.”

Whitehorse said the difference came down to what they did defensively as Page held the Wildcats to only seven points in both the second and third quarter.

“Some of my girls didn’t play their best game but we did a good job defensively,” said Whitehorse, whose team improved to 21-5 overall. “I’m happy with the effort they turned in because we played as a team.”

The Sand Devils led 14-10 after one quarter with junior post Torrance Begay putting in half of her 12 points in the first eight minutes.

“Lately, she’s been setting the tempo for us on the offensive end,” Whitehorse said of his pupil. “She had some great games in our last couple of wins and I like that she’s setting that scoring mentality for the girls.”

Begay added four more points in the second stanza as Page built a 27-17 advantage at the break. 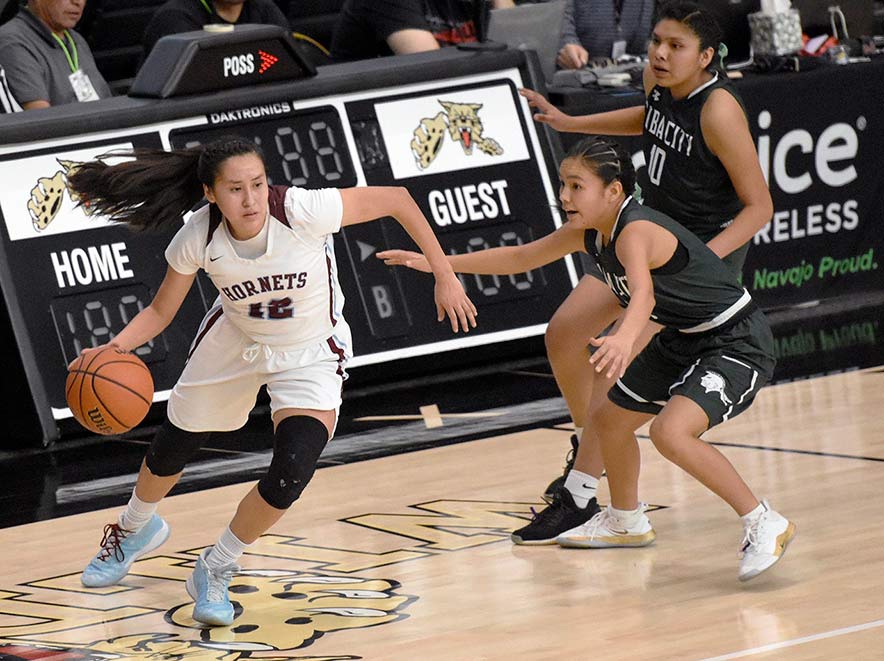 Ganado Lady Hornet Jalya Mcintosh (12) drives the ball against Tuba City Lady Warrior Thalia Susanyatame (10) and her teammate on Friday at the Wildcat Den in Chinle.

Due to some foul trouble, Begay was limited in the second half as she only scored two points. Nonetheless, there were other girls that picked up the slack.

“A couple of our girls came off the bench and gave us some good minutes,” he said.

In addition to Begay, junior guard Emma Yazzie chipped in seven while Camryn Nockideneh and Miquedah Taliman added six each.

For Chinle, sophomore post Aisha Ashley finished with 12 points while fellow senior post Tea Murray had eight as the Wildcats fell to 15-9 overall.

In the earlier game, the inside-outside game proved to be a winning combination for the Ganado team.

The Lady Hornets went to senior post Michelene Coleman early as she helped Ganado to a 13-5 first quarter lead by scoring eight of her game-best 16 points.

In the second, the Hornets got its outside game going as they nailed four treys to go up 31-17 at the break with senior Deana Curley hitting three of those trifectas.

“We got up to a 14-point lead and the girls did a good job of feeding Mesh to get her going,” Ganado coach Mike Bitsuie said. “Deana got us going with her outside shots but overall the girls played a lot better defensively.

“If we play like this we’re a hard team to beat,” the Ganado coach added.

Late in the third the Hornets pushed its lead to as much as 20 points but the Warriors used a 7-0 run to pull within 47-34 heading into the fourth.

That rally, however, was short-lived as Ganado pushed its lead to 59-39 on a trey by junior guard Jaedin James with 4:48 remaining.

As a team the Hornets had four players in double figures headed by Coleman. Curley came in next with 15 followed by James with 12 and Jayla McIntosh added 10.

“We were off for a week and our girls were wanting to play,” Bitsuie said.

Coleman concurred while adding that their win over Tuba City is going to help with their confidences.

“We kind of struggled over the past few weeks and it really affected us,” she said.

For Tuba City, they had Jayda Chee and Chenille Nodman finish with 10 points. With the loss, Tuba City dropped to 19-9 overall.