Who are ‘Navajos for Trump’? 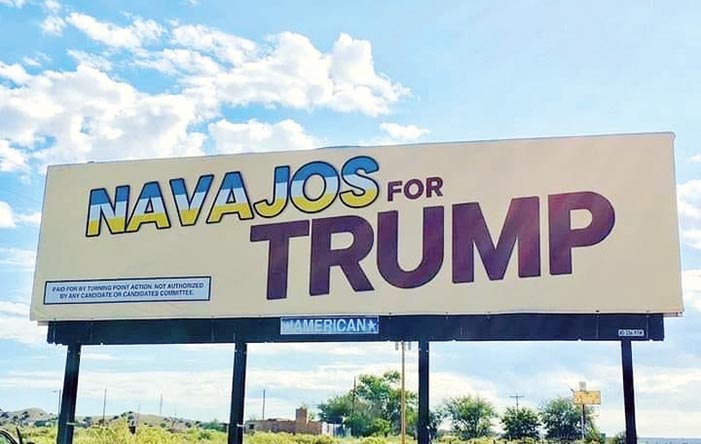 Courtesy photo
This "Navajos for Trump" billboard on I-40 near Sanders, Arizona, has been turning heads.

There is no doubt Navajo Republicans exist. They comment on the Times’ Facebook page. We know some personally.

But are there any actual Navajo Republicans behind the massive “Navajos for Trump” ad campaign that hit the Navajo Nation last week? If so, they’re not exactly front and center.

A group called Rally Forge LLC took out a half-page ad in the Navajo Times last week and also a banner ad on the Navajo Times website with the words “Navajos for Trump” prominently displayed. According to its corporate filing documents, Rally Forge is run by Jake Hoffman out of Queen Creek, Arizona.

CNBC described Rally Forge as “an obscure media advisory firm,” which is more than its website reveals. It’s hard to determine from the website exactly what Rally Forge does, although it does volunteer, “We only build movements that will help restore our nation to its rightful place as the shining city atop the hill.”

The ads state they were paid for by Turning Point Action. You also can’t tell from its website, but Turning Point Action is a 501(c)4 political nonprofit connected with Turning Point Media, which targets college students and whose stated mission is “identifying, educating and organizing on principles of limited government, free markets and fiscal responsibility.”

Turning Point Media and Turning Point Action were both founded by young pro-Trump activist Charlie Kirk, who from his pictures, does not appear to be Navajo. We suspect Hoffman isn’t either. An employee who answered the phone at the Navajo Nation’s Vital Records office said they can’t deny or verify tribal membership over the phone, and their office remains closed to the public as of Monday.

So, assuming the people who paid for the ad and the people who developed the campaign aren’t Navajo, where are the “Navajos for Trump” referenced in the ads?

This reporter emailed the woman from Rally Forge who paid for the ads to ask that question, and whether we could meet them. The email was forwarded to Andrew Kolvet of The ATK Company, Turning Point’s public relations firm. According to Kolvet, Rally Forge is an ad agency and developed the ads for Turning Point as a private contractor. Turning Point paid Rally Forge, which paid the Times.

Kolvet assured this reporter there were some real Navajos behind the ad campaign, but it might take him a while to produce them, as Turning Point was working on several targeted ad campaigns and he wasn’t intimately familiar with all of them. In fact, he had to do a little research when Rally Forge forwarded him the email.

“My understanding is that there was a loosely organized group who approached some people who approached Turning Point” about doing some advertising on Navajo, Kolvet said.

“In a state like Arizona that is so important to the presidential race,” he said, “we were very interested.”

So who were these people who approached people who approached Turning Point? Googling “Navajos for Trump,” the only thing that came up was a Facebook page. It has 247 likes and was started in December of last year. It mostly consists of unflattering memes about Democrats and articles from websites with names like conservativebrief.com and Red State Observer. It does include a picture of the billboard, with the words “This was put up in Sanders Arizona,” but the group does not claim credit.

Responding to a Facebook Messenger message, the administrator of the group, who did not reveal their name because they feared “hateful attacks,” said, “We are in contact to those responsible for the sign and the person who took the picture is a good friend and a member of this group.”

So … are the “Navajos for Trump” referenced in the ads for real, or a creation of a national PAC? It’s still not clear, although it seems Navajo Trump supporters are involved at some level.

So far, the campaign doesn’t seem to be changing too many minds, at least if responses to it on social media are any indication. A doctored version of the billboard photo is circulating with the word “Dumb—“ before “Navajos for Trump.”

“This is pretty gross, especially when you consider how badly Navajo Nation has fared these last few months,” posted one observer, one of several dozen similar comments.