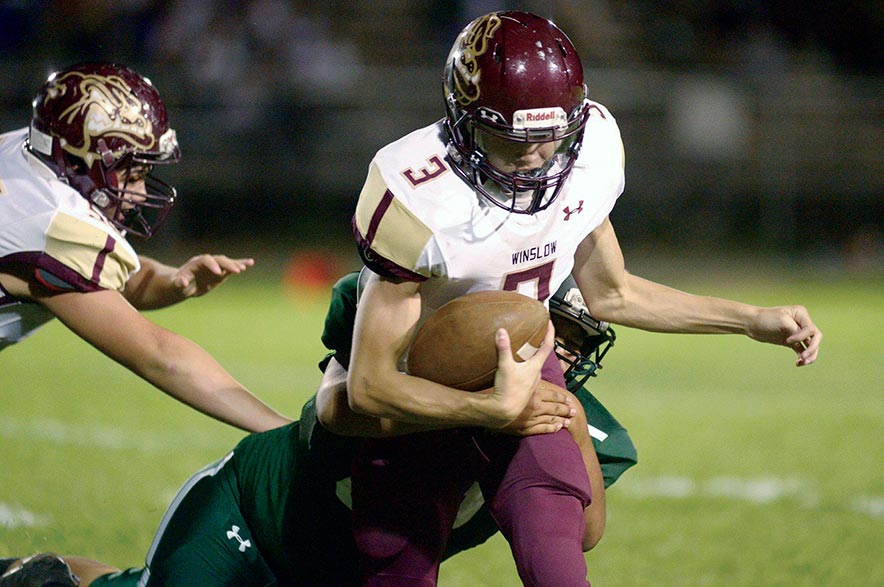 File photo
Winslow quarterback Jace Lyons looks to gain more yardage in this file photo last year. The Arizona Interscholastic Association adopted new modifications for the upcoming football season. Winslow is one of two area schools that will play football as all of the reservation schools have opted out due to the pandemic.

Players, coaches, game officials, team personnel and game administration are asked to maintain a distance of six feet at all times before, during and after the game because of the coronavirus pandemic.

Team personnel are asked to wear face masks at all times while players must wear them “during travel, pregame when possible and post-game.”

The modification includes changes in the coin toss as one captain is allowed to represent the team at centerfield. And to maintain social distancing, the team box will be extended on both sides of the field to the 10-yard line.

Winslow coach Brandon Guzman said the new modifications are going to be hard to implement once the season gets underway in early October.

“We’re asked to follow the new guidelines but as soon as the ball is kicked off everything goes out the window,” he said. “We have to make sure that everybody is social distancing but it’s hard to imagine how it’s going to work.”

Following federal, state, and county health guidelines the AIA has adopted a three-phase approach to reintroduce sports amid the pandemic.

Currently all schools are in Phase One, with athletes working out in small groups with the same kids reporting to the same group each time.

This measure is to curb an outbreak if one does occur. As of late last week, Guzman said none of his players has tested positive for COVID-19.

“We’ve been very lucky as far as the kids not being exposed,” he said. “Nobody has come down with COVID.”

Nonetheless, he’s had a few players that have been placed in isolation for 14 days due to being exposed to someone with coronavirus.

“I had some kids self-report saying ‘Hey coach I was around COVID,’” he said. “And our protocol is stay away for 14 days.”

He said those exposures happened around the Fourth of July holiday and at that time schools were closed anyway.

“We closed our facilities once the governor did the initial 30-day ban on gyms,” he said. “We were shut down too. It so happened at that time a kid reported that he was around a family member that had it.”

With the first day of practice set for Sept. 7, Guzman said he’s not sure what kind of personnel he’s going to have due to coronavirus.

“I don’t know if the parents are going to feel comfortable sending their kids out to play football,” he said.

He said there could be a liability issue but he stressed that playing football is voluntary.

“Every afterschool activity is voluntary so we’re not forcing kids to come out and play,” he said. “As a coach I have to take a step back and if a parent decides it’s not safe for their kids to play then that’s fine. I know some kids are scared to bring home COVID to their parents and grandparents and I don’t want that.

“I’m in the same boat,” he added. “I have a two-year-old son at home and I have my parents and my in-laws watch him and I don’t want to bring anything back to my family.”

Guzman said he wants to do what’s right for the kids.

“I know their mental health is also being affected by not being able to play sports,” he said. “Right now COVID in our No. 1 enemy so I want to make sure I’m doing my part to follow these guidelines so that our kids are able to play healthy football.”

With the season still weeks away, the Winslow coach anticipates other protocols to be introduced by the AIA in the coming weeks, including some affecting spectators and cheerleaders.