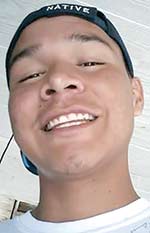 Triston attended Central High School in Gallup, and loved music and writing his own poems, rhymes and beats. He enjoyed the outdoors such as hiking and riding horses, swimming, traveling and one of his passions was cooking.

Triston is preceded in death by his grandfather, Tommy Lee Sr.

WINDOW ROCK — Funeral services for John M. Whipple, 58, of Window Rock, will be held today, April 11, at 10 a.m. at the Christian Reformed Church in Window Rock, with Stanley Jim officiating. Burial will follow at the St. Michaels cemetery in St. Michaels, Arizona.

Ronnie is preceded in death by Roy J. Lee Jr.

Pallbearers were family and friends.