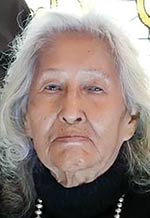 Betty was born Aug. 7, 1934, in Mariano Lake, into the Tó’aheedlíinii (Water Flow Together Clan), born for Ta’neeszahnii (Tangle Clan). She passed away April 25, 2020, in Farmington.

Betty is preceded in death by her parents, Debah and Roy K. Yazzie. 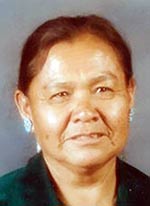 Rena was raised in Black Mesa by her widowed mother, Adelaide Tsèadzìsii Donald Peaches, and lived most of her life tending to her sheep and cornfield. She was a strong believer of the Bible and the Navajo traditional way of life.

Rena had no formal education and worked at the Shonto Boarding School cafeteria for a while, but due to livestock needs she returned as a homemaker/rancher.

Rena was physically, mentally and spiritually a very strong woman. She was frequently called upon to Kinaaldas, Native American Church and traditional ceremonies for her guidance.

A memorial reception is pending due to the COVID-19 pandemic. When the pandemic dies down, the family is anticipating a three-day event on Sept. 18-20 to be announced accordingly.

Thank you to Valley Ridge Mortuary in Tuba City, for their service in meeting Rena’s family wishes. 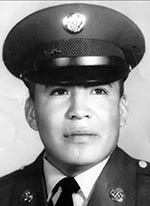 Marshall was born Aug. 13,1943, in Tinian, into the Hashł’ishníí (Mud People Clan), born for Ta’neeszahnii (Tangle People Clan). He passed away April 17, 2020, at the VA Hospital in Albuquerque.

Marshall graduated from Cuba High School in 1963 and soon after served in the U.S. Army and was in combat during the Vietnam War. He retired in 2006 from the Dzilth-na-o-dith-hle Community School.

Marshall was an active runner majority of his life, which started during his days at Albuquerque Indian School. He was a devoted Dallas Cowboys fan and was a proud member of the Ojo Encino Veterans Organization.

At this time, during the COVID-19 epidemic, no funeral or military honors will be held, but a memorial service will happen in the future. No date has been determined yet.

FARMINGTON — A private family burial for Herman Augustine was held April 25 at the Memory Gardens Cemetery.

The world was blessed with Herman Augustine on March 15, 1921, near Pueblo Pintada, New Mexico, to the late Juan and Nora N. Augustine.

“Grandpa” lived a long, simple, rich and fulfilling life of 99 years in Escavada, New Mexico. On April 20, 2020, God called Grandpa home to the Kingdom of Heaven as he had fulfilled his duties here on earth.

Grandpa was the pillar of the family, who served not only as “Papa”, but served the role as a father and a mother. He provided a true testament of unconditional love and supported everyone with their endeavors with words of encouragement and resources.

Grandpa never criticized anyone for their mistakes or foolishness; instead he was there to support the learning and growth that was to follow. In this aspect, he was a man of few words.

Grandpa was a proud decorated veteran who honored his country by serving in the Army during World War II. He was proud to have served during wartime in Germany. It was during this time that he was injured when a grenade was dropped into the tank, which he occupied with fellow comrades. He never complained about his injuries, instead he viewed his scars as a badge of honor.

When Grandpa returned to the state side he began his duty as a supporter/advocate of veteran issues. He advocated for improvements of services for veterans by attending meetings at the local and national level. Many times, he would get on the bus to travel to New York, Chicago, and other cities to attend conventions to support the development of bills and laws as it pertained to veterans and their families.

Next to being a proud veteran, Grandpa was a passionate fan of the Denver Broncos. He enjoyed watching football and lived for the Super Bowl parties. He brought the family together during this time, as he always wanted to know who was hosting the Super Bowl.

Grandpa believed in hard work as he maintained a rigid work schedule even when he was only working in his yard. He kept track of when he “clocked into work” and scheduled two breaks and a lunch into his day and was “off work” only until he put in an honest day’s work.

Grandpa always had projects such as digging out his pond by hand, filling in potholes on the road and engineered his own road by doing all the labor work. If someone came to visit him during his workday, he was sure to tell them that he could not visit until his break or lunch, not when he was working.

Grandpa enjoyed herding sheep until he was no longer ambulatory. He took care of the sheep and lambs by providing for all their needs without asking for help and knew every face of his livestock, so if the grandkids lost one he provided a description of which one was missing.

Grandpa also enjoyed watching “picture shows” and was an avid reader. If he came across a word he did not know the meaning of, he would write it down in his notebook, look up the definition and memorized it. He always had a list of spelling words, which he studied and would quiz himself until he could recall it from memory.

There are no words to express what a truly wonderful man Grandpa was, it can honestly be stated that they don’t make men like him anymore. He set an exemplary example for his grandkids, relatives and friends. He lived a life of integrity, honor, hard work and respect, which he set the standards high for. His act will be a tough act to follow.

We were grateful that God thought us so worthy to have blessed us with the best papa in the world for 99 years. We have many fond memories and stories of our time with papa. He will be sorely missed by all who knew him.