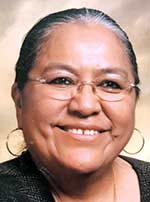 REHOBOTH, N.M. — Funeral services for Florence M. “Flo” Barton, 75, will be held Monday, June 4, at 10 a.m. at the Rehoboth Sports and Fitness Center in Rehoboth, New Mexico, with Pastor Tim Holwerzyl officiating. Burial will follow at the Rehoboth cemetery.

Visitation will take place Sunday, June 3, from 5 p.m. to 7 p.m. at Cope Memorial Chapel in Gallup.

Florence retired from the business office at Gallup Indian Medical Center after 40.5 years working for the federal government. After retirement she worked as the alumni coordinator for a few years at Rehoboth Christian School.

Florence was a retired board member of the Gallup Inter-Tribal Indian Ceremonial after 30 years. She was an avid sports fan and was a professional spectator. She enjoyed traveling, visiting, and spending time with her children and grandchildren, attending their respective sporting and school activities. 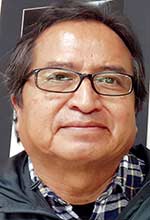 Originally from Shiprock, Marvin spent many years living in Albuquerque, before returning to Navajo homelands in 2015.

After a career as an office technology specialist, Marvin returned home to the Navajo Nation to pursue his passion of being an artist.

Marvin will be remembered by his family, friends and anyone who met him as a kind, humble, generous, and calm soul who never missed an opportunity to help others. He lived life with a sense of adventure, zest for experiencing new things and places, and found great joy in traveling to visit friends and make new friends far and wide.

Marvin was a creative artist in several forms of media and loved making moccasins for family and friends. He always went out of his way to make life better for others. He was the best father a son could ever dream to have in his life. 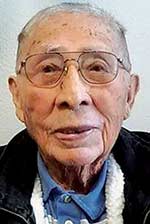 Matthew married Marilyn Atcitty Nez on Dec. 12, 1944, in Carson City, Nevada, and enjoyed his time spent with his foster father, David Belen, and family on the Mescalero Apache Indian Reservation in New Mexico.

Matthew was proud to have worked on five ships while living in California during World War II and was a guard and then a dorm room manager at the Intermountain Indian School in Brigham City. During the summers he would work at a local service station.

Matthew enjoyed working on cars, going to powwows, rodeos, selling at swap meets, camping, and helping family. He seemed rough around the edges but was a teddy bear at heart.

Matthew is preceded in death by his parents, son David, granddaughter April, and great-granddaughter Cecillia.

Special thanks to the staff at Pioneer Care Center in Brigham City, and staff at Peach Tree Place, West Haven and Canyon Hospice.

Myers Mortuary is in charge of arrangements.

Condolences may be sent to the family at www.myers-mortuary.com.

GALLUP — Funeral services for Jacqueline Whitman, 46, of Oak Springs, Arizona, will be held today, May 31, at 10 a.m. at the New Life Apostolic Church in Gallup, with Leo Fisher officiating. Burial will follow in Oak Springs.

Jacqueline is preceded in death by her mother, Elsie Ann Chischilly; and daughter, Katezinzki Ariel Begay.

Irvin is preceded in death by his sister, Annie Williams.

FORT DEFIANCE — A memorial service for Carlton Davis Williams, 55, of Fort Defiance, will be held Saturday, June 2, at 10 a.m. at the Presbyterian Church in Fort Defiance, with Pastor James Flores officiating.

Carlton graduated from Window Rock High School in 1982 and attended technical training at ABC Welding School in Phoenix, obtaining a commercial Class A license and LP3S classification in HAZ/MAT training.

Carlton was employed as a certified welder and CDL Class A HAZ/MAT operator. He worked for Navajo Tribal Utility Authority in gas utility, as a welder at American Homesteaders, Inc., Nations Gas Technology as a gas technician, and most currently at Natural/Water Resources.

Carlton enjoyed the outdoors, fishing and other outdoor activities.

Carlton is survived by his mother, Laurita W. Jones; and sister, Dorothea Williams.

A reception will take place at the Presbyterian Church, following the memorial service.