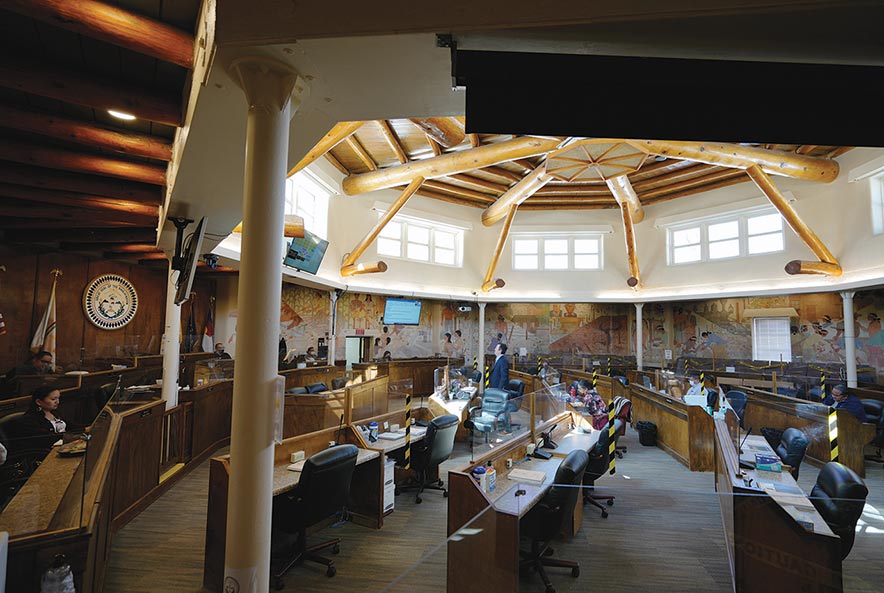 This is because a consensus among delegates could not be achieved by the end of Monday’s Navajo Nation Council special session where Nez’s bill (No. 257-21) failed to pass.

The amended version of the bill, approved by the Naabik’iyati’ Committee on March 25, would have appropriated the remaining $1 billion by dividing $910 million between the 24 delegates, yielding $41.4 million per delegate region (less previously approved Sihasin/UUFB reimbursements and refunded CARES Act projects).

An additional $159.7 million would go to COVID-19 recovery programs and services.

However, 16 votes were needed to pass the bill, so they were one vote short. Delegate Edison Wauneka served as pro-tem speaker for the session and did not vote.

They wanted to stay with the president’s original bill, which distributes project funds in varying amounts to delegate regions (some get more than others), and largely keeps the decision-making, project management and contracts centralized in Window Rock.

“Fifteen of us made every effort to broker compromise and submitted the most innovative funding plan in Navajo Nation history,” said Delegate Carl Slater.

“We tried our hardest to get the people’s voice in the ARPA funding allocation and we will keep working on their behalf,” he said. “Window Rock cannot be a dictator to our communities and our people. The concerted effort to deny them their voice will not be successful.”

Not one of the delegates who voted red responded to a request for comment.

President Jonathan Nez told Navajo Times on Tuesday that the proposal developed by the technical experts working for the executive branch was undone by a “handful of council delegates” who proposed a “spending free for all.”

“Now, we have to work together efficiently and show the Navajo people that we can finalize a comprehensive plan, not one that is dictated at the discretion of delegates, that will provide long-term infrastructure needs,” said Nez.

All of this comes after nine months of intensive discussion, work sessions and meetings among Navajo Nation leadership and division directors over how to allocate the ARPA funds.

“We cannot waiver from our efforts to be fair and equitable as we have families without domestic water and electricity in every space of Dinétah,” said Delegate Daniel Tso. “In failing to get the 16 or more votes, we are still playing with our Diné people’s ideas. Hope stays on the horizon rather than bringing it into our homes and hogans.”

President Nez had expressed last week that he was concerned over further delays in approving his bill and the possibility of losing a whole construction season.

Now that is pretty much guaranteed because the Council and president are literally back to square one because Nez’s bill is off the docket.

“Had the original legislation been approved without the amendments, we’d be ready to begin construction on projects within days to get water, electricity and other basic necessities to our people, but now we will likely miss at least a portion of the current construction season,” said Nez.

After the March 25 Naabik’iyati session, Nez expressed strong opposition to the committee’s approval of the amended bill, which he said would establish a “discretionary” funding process for delegates when the original legislation sought to allocate the funds on a “need-basis.”

“The executive branch spent several months working with the legislative branch, chapters and technical experts to develop project listings based on local needs and projects that already have the required clearances such as right-of-way approvals to proceed in order to meet the federal deadline to spend the ARPA funds,” he said.

Nez also emphasized that federal dollars come with strict guidelines that must be followed.

“We cannot afford to defend against potential accusations of misuse of federal funds, and this amendment puts our Nation at risk of that,” said Nez.

However, delegates quipped back at Nez’s suggestion that any of the funds would be “discretionary” precisely because any project expenditures must adhere to federal guidelines and Navajo Nation Department of Justice review.

“President Nez is misleading public opinion by controlling what and which local chapter infrastructure projects go forward,” said Delegate Daniel Tso. “That for me is not in the best interest of the people and the rebuilding of our great Navajo Nation.”

“President Jonathan Nez needs to be honest with the Navajo people and not say this is discretionary funding,” said Delegate Elmer Begay. “Our chapter officials, staff, and community leaders are competent, know what they want, and worked hard on submitting their projects to the Division of Community Development.”

Crotty said the whole reason the amendment to divide funds equally between delegate regions was put forth was because the executive branch proposed an “imbalanced” project listing in which many ARPA eligible water, broadband, and electric projects were not included.”

“The amendment was passed by a majority of the Naabik’iyati Committee that directly invests ARPA funding into our 110 chapters,” said Delegate Otto Tso.

“Hardship at the chapter level should not be dictated by Window Rock or President Jonathan Nez,” he said. “This amendment gives control and decision-making power back to the Navajo people at the local level.”

Delegate Vince James said he has “complete faith” in the leadership of chapter officials, staff, and the many elders who participate in local planning.

“We need to work together to accommodate the urgent needs of our Navajo people, starting at the hogan level and upward,” said Delegate Vince James. “In order for this process to be fair and transparent, the president needs to attend our work sessions and understand our position from the Naabik’íyáti’ Committee.

“It’s time for the Nez-Lizer administration to compromise,” he said.

The only way to move forward with appropriating the remaining ARPA funds is with new legislation, but at this point any bill would risk failing because the Council and the president’s office remain divided as to what distribution formula is best for the people.

“The Nez-Lizer administration’s approved project listing left much to be desired in the way of the real and immediate relief and improvement this Council seeks,” Delegate Amber Crotty said on Tuesday. “We need more realistic proposals that put the people first.”

What is known by definition is that all parties involved will have to accept that respectful dialogue and compromise will have to take place in order to move forward with a new plan that is fair and acceptable to everyone, because $1 billion dollars is simply not enough money to fulfill all of the infrastructure and COVID-19 recovery needs on the Navajo Nation.

In a bit of damage control on Tuesday, Damon said that he is already working with “a coalition” of delegates to introduce new legislation by the end of April that would allocate the $1 billion in ARPA funding.

“The Navajo Nation Council is moving forward to find a middle ground that is equitable and meets the immediate needs of the Navajo people,” said Damon.

However, that was the intent of the amendment that just failed.

“Chapter houses have to open and the Nez-Lizer administration must listen to the people on how we spend the ARPA funds,” said Delegate Eugenia Charles-Newton.

Delegate Kee Allen Begay, who was in favor of the equitable distribution plan because he felt his communities were being shortchanged in the original bill, said he hopes the next round of ARPA budget discussions will include all delegates and chapter officials.

“We were never consulted during (Nez’s bill’s) budget development,” he said. “I’m here representing five chapters and they expect a certain amount of the ARPA funding.”

As they begin anew, Delegate Thomas Walker said it’s important that all leaders work to ensure all local chapters are taken care of through the ARPA.

“Let’s regroup to listen to the people and the chapter governments,” said Walker. “Let’s serve them by putting them first and not deny what was meant for them.”