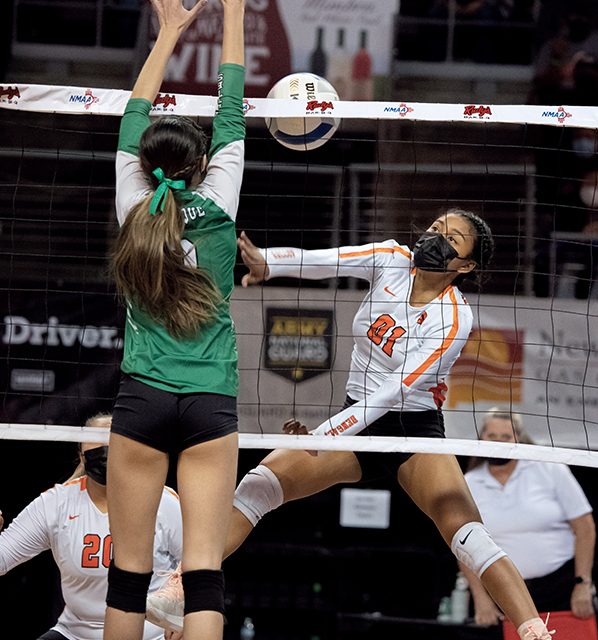 The double elimination concept at the New Mexico state volleyball playoffs has benefited a number of squads.

Gallup coach LaRena Morris spotlighted that matter after the Lady Bengals went 1-1 on Friday in the Class 4A bracket.

“We had a tough one with Pojoaque Valley,” she said. “I felt like our momentum wasn’t there, and we told the girls momentum is going to win our games. We have to keep the energy and motivation up there and if we do that we can finish out strong.

In addition to the Bengals, Laguna-Acoma and Ramah kept its season alive in their respective brackets.

In other state volleyball action, the Pine Hill Lady Warriors (1A) and the Santa Fe Indian Lady Braves (3A) were eliminated on Friday. 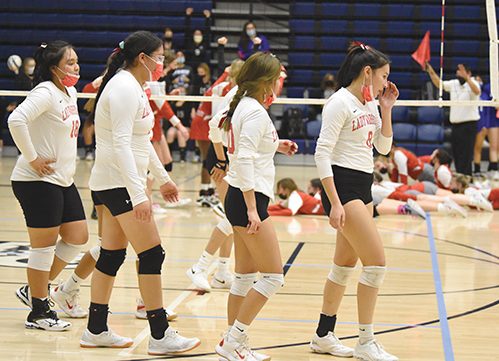 Navajo Times | Donovan Quintero
The Pine Hill Lady Warriors walk off the court after being eliminated from the Class 1A playoffs on Friday evening in Rio Rancho, N.M.

The Hawks will take on the winner between Capitan and Escalante from the contender’s bracket at 2 p.m. at Rio Rancho High School.

The 2A championship game is scheduled for 4 p.m. at the Rio Rancho Events Center.

With the three-set loss to Gateway, the Mustangs will try to work its way back in the contender’s bracket. They are scheduled to play Logan at 8 a.m. at Rio Rancho High School.

If the Mustangs advance they will take on top-ranked Melrose at noon at the Rio Rancho Events Center. The 1A title game is scheduled for 4 p.m.

“We’re still alive and we can fire right back,” Larson said. “The big lights got them here. Hopefully we can come back stronger (on Saturday) and fight our way back.”

Like Ramah, Gallup will try to work its way back in the contender’s bracket as they are scheduled to play Santa Teresa at 8 a.m. at the Rio Rancho Events Center.

If they win, they will face top-seed Albuquerque Hope Christian at noon (RREC). The 4A title game is slated for 4 p.m.

“I watched them play and they’re great,” Morris said of Santa Teresa. “When you come to the state tournament you have the best of best, so we have to take what we have, which is our hitters, our blocking and we definitely need our serves.

“That will help us a great deal and I think we do have a really strong serving team,” she added.

Against Portales, the Bengals used a 7-2 run in the fourth set to break an 18-18 stalemate to move into today’s round.

Gallup senior Hailey Long put down three of her team-best 20 kills in that last surge.

“I just got smart with my hits and coach told us to hit the corners and hit the middle because that was open,” Long said, while adding that her teammates cued her on where to place her hits.

“The girls in the back helped me too,” she said. “They always tell me what’s open.”

“Hailey is one of our top hitters and she did very well,” Morris said. “She knows where to put that ball. I mean, she’s a very smart hitter. She can read her blockers and our setter (Lynda Mike) uses her. They communicate very well with one another.”

Mike had a hand in Gallup’s 48 kills as the Bengals had six hitters contribute with senior middle hitter Jordan Joe putting away 17 kills.