A voice for change: Sandra Jeff is determined to help the people

Growing up, her parents taught her and her siblings that to serve people, they would have to give up their positions and lose themselves in service. 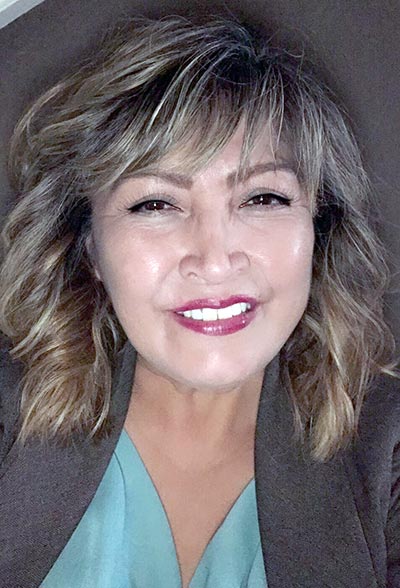 And to be compassionate and have empathy, said Sandra D. Jeff, the former New Mexico state representative who represented District 5.

“They had told me, ‘If you ever want to become a leader, make sure you take care of your family first, then put your people as your priority,’” Jeff said.

Now she’s running for president of the Navajo Nation and her life story – from her deep family roots and its values, to leadership – reflects the dynamism and potential of the Nation.

“That’s where my teachings come from,” Jeff said.

She is from T’iists’óózí, New Mexico. She is the daughter of Ann C. Jeff and the late Sam Jeff.

“The key is we need to stop with this self-serving,” she said. “That’s the main issue, and that needs to stop and give reassurance. That needs to be brought back, and the trust among our people.”

The second problem is the minimum wage. Jeff said her goal is to provide a livable minimum wage for workers in the Nation through a gradual implementation.

“They’re (workers) the ones who have to commute every day,” Jeff explained. “We need to take care of our employees because they’re the key – the body that really takes care of our nation’s needs.

“We need to come down to the local level,” she said. “We must work with our chapter officials and school board members, and we have to have that communication at the local level.”

Jeff said the Nation is failing to work with its 110 chapters that appear to be moving in opposite directions as the world is facing several forces: food shortages, inflation, the persistence of COVID-19 and the effects of global warming.

“That’s one thing that I’ve always encouraged – that we all work together,” Jeff explained, “even coming from the executive and the legislative branches because they’re the ones that have to make those decisions, and they have to compromise.

“They have to ensure that the people’s needs are met,” she said. “That’s the reason why they’re elected into these positions.”

The Nation has had little economic growth over the last several years, and some communities and chapters have experienced no change.

The specter of no economic growth combined with rising prices continues to assault the tribe’s fortunes.

“We have so many of these policies in place that are outdated,” she said. “We need to make those changes so that we (can) be business-friendly (and) put people back to work because of our high poverty and our high unemployment.”

Jeff said she would speed up the Nation’s economic growth by supporting businesses that want to operate in Diné Bikéyah.

The change may raise anxieties about how the Nation would supply enough water for all the new businesses when there is no water and droughts and hotter summers are draining reservoirs.

“We just need communication,” Jeff said. “We need to work together, and our people need to hold us accountable. If I can do it in Santa Fe, I know I can do it for the Navajo Nation because I stood up to those elected officials.”

Jeff served in the New Mexico House from 2009 to 2015, representing a large portion of the Navajo Nation in McKinley and San Juan counties.

She served two terms before she was kicked off the primary ballot during her run for a third because she didn’t collect enough valid signatures on her nominating petitions.

She then ran unsuccessfully as a write-in candidate in the general election.

In January 2018, she updated her voter registration to the Libertarian Party, intending to run for New Mexico secretary of state. She dropped out of the race in August that year, citing “unforeseen personal obligations.”

“I got into working there, at the New Mexico state level, with the Public Regulation Commission, with former New Mexico Sen. Lynda Lovejoy,” Jeff said. “I got the opportunity to observe what the legislators conducted there within the state capitol.

“(Lovejoy) and (former Council Delegate) Leonard Tsosie were the ones who showed me what kind of businesses they conducted there at the Roundhouse (state capitol),” she said. “I got very interested in how the lawmakers introduced legislation, the structure of it, and that’s what motivated me to run for office.”

A voice for change

Jeff said if a voice can change a room, then it can change the entire Navajo Nation, and that Diné working together can change everything.

“That’s when we can work with our elected officials in Washington, D.C., within Arizona, New Mexico, Utah and Colorado to ensure that our needs are met because they know that we still have our treaties that they have to abide by,” Jeff said.

“And they have to work with us,” she said.

Jeff added that she would use her voice to activate the change Diné need in the Nation, and it would take a special kind of leader, holding powerful people’s feet to the fire, to do so.

“We, as a Nation, need to come together to deal with these issues,” Jeff said. “I’ve been a leader and will continue to be a leader.

“I’m not a politician,” she added. “A politician is a liar. A leader leads, and that’s the key.”