Lizer says he ‘held his breath’ while maskless in D.C. 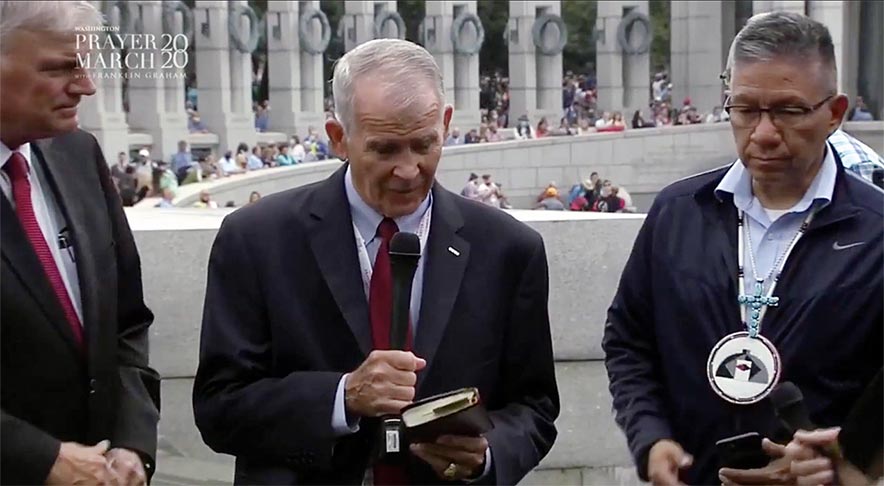 Editor’s note: This story originally stated Vice President Myron Lizer was seen at a Trump rally in Oklahoma June 20. That was an error based on a doctored photo that had been circulating on social media. Lizer did not attend the rally. The Navajo Times apologizes for the error.

Vice President Myron Lizer was seen thousands of miles away, praying for the whole country and the Navajo Nation, during a four-day getaway.

While 173,000 Diné were required to stay home during a 57-hour curfew on the Navajo Nation, the vice president was photographed and videoed not wearing a mask and not social distancing at a gathering in Washington, D.C. The event was the Prayer March 2020, a faith-based gathering of about 50,000 held on Saturday.

“I was out in D.C.,” Lizer said. “I was invited by Franklin Graham of the Billy Graham Evangelistic Association.”

Lizer said he was invited to pray for the country and the tribe, which he said he considered “the highest honor” he’s had to date as vice president. He left on Thursday evening and by the time he arrived at the Nation’s capital, he said, President Jonathan Nez had enacted the 57-hour curfew.

Lizer did not say what he did on Friday but on Saturday, he attended the prayer march that was held at the National Mall. Lizer was seen in a video standing alongside Graham and several other people, including former Army commander Lt. Col. Oliver North.

Along with many others, he was not wearing a mask. For several minutes, the former pastor stood silently. After speaking to someone off camera, he was handed a mask. It is not known who handed him the mask, but Lizer said no one from his staff traveled with him.

During time he was not wearing a mask, Lizer said he was holding his breath, as he said he usually does when he takes off his mask to pose for photos. In the video in which he appeared for more than five minutes without wearing his mask, it appeared he took breaths as he spoke.

“I probably took several snapshots with people and I held my breath and the time when I was praying, obviously, I had to take my mask off, but there weren’t people in close quarters, close proximity with me,” Lizer said. “It’s just one of those things, if you were to just look at that, the perception, it’s a snapshot in time. I do understand the optics of it all, I understand that.”

“I love our Navajo Code Talkers,” Lizer said. “I was able to reference the code talkers. Some in the faith-based community have likened Jonathan Nez and Myron Lizer as modern day code talkers.”

Lizer did not elaborate on what he meant by that statement. Seeing Lizer thousands of miles away, seemingly not adhering to his own administration’s public health orders and curfews, did not jive with some people. “Myron Lizer u going bring back virus bk to window rock az, stay n where u at,” Vivian Wilson wrote on social media. “U need 14 days quarantine.”

Another Navajo constituent voiced his dismay and commented on a photo of Lizer standing with others without a mask. “As a member of the Navajo Nation, it’s hypocrisy that this leader puts our reservation on lockdowns and yet he can run around without social distancing and wearing a mask?” Dany Jones wrote. “If he was a true leader! He would have stayed put on the Nation and set an example.”

Earlier this summer Navajo Times reported Lizer attended a “Students for Trump” event in Phoenix. Lizer was seen wearing a mask while attending that event.

He went to D.C. “mostly” as a “private citizen” since the tribe’s P-cards were down because of the beginning of the new fiscal year, he said.

He paid expenses out of pocket. “The Nation did not pay one penny,” he said, seeming to contradict an earlier statement that his trip was as the Navajo Nation vice president. “I guess for the most part I was a private citizen.” Lizer said he is currently isolating himself after his trip. “I don’t know if you can tell, but I have a mask now,” he said during the phone interview. “Maybe I should have (Staff Assistant) Adam (Begaye) take a picture of me talking to you.”

Lizer said he understood the administration’s critics. “Not everybody’s the vice president, not everybody gets these kinds of real heavy invites,” he said. “Everybody wants me to be normal. “If somebody was in my position, what would they do?” he said. “Maybe one of those incidents, what would you do if you were in VP’s shoes? Ask that question.” Lizer said he was going to get tested on Wednesday. It is not known at press time if he did get tested.