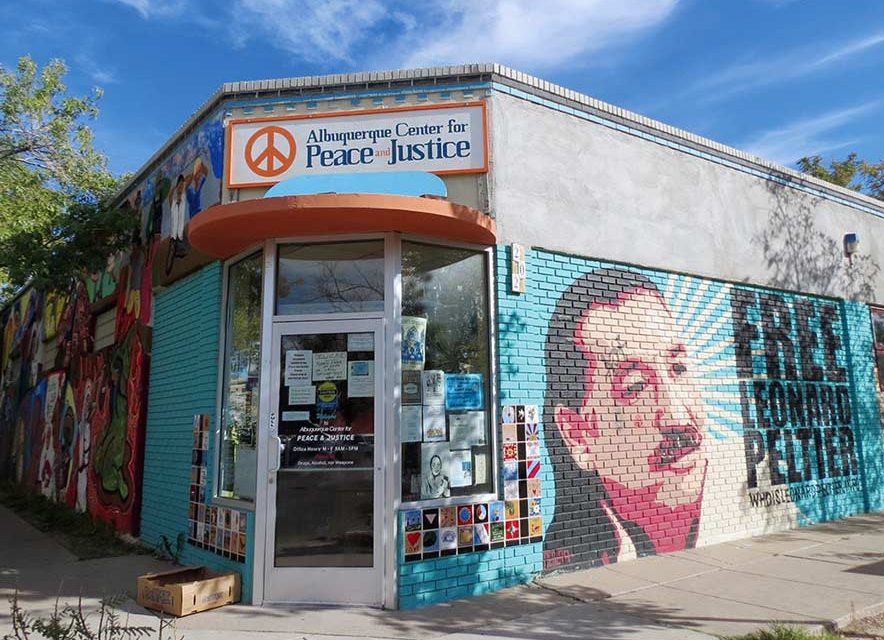 Courtesy photo | Joanna Keane Lopez
The Albuquerque Peace and Justice Center has advocated for Leonard Peltier’s release from prison for many years. This mural was created about 10 years ago.

On the corner of Harvard and Silver, near the University of New Mexico campus, there’s a large mural of Leonard Peltier in his younger years painted on the side of the Albuquerque Center for Peace and Justice.

Next to his likeness, bold black letters call for his freedom.

Peltier, Turtle Mountain Chippewa, a member of the American Indian Movement, was found guilty of killing two FBI agents, Jack Coler and Ronald Williams, during a shoot-out on the Pine Ridge Reservation in June of 1975.

Peltier has been in prison for 43 years.

An FBI report, called the Res Murs investigation for reservation murders, states that Williams was shot in his left arm and side, foot, right hand, and head. Coler was hit in the arm and head.
A young Native American man, Joe Stuntz, was also killed in the shoot-out between the FBI and AIM members.

His death has never been investigated, according to the International Leonard Peltier Defense Committee.

The Res Murs report states that at least seven persons were believed to have fired at Williams and Coler. In the car they were driving, 125 bullet holes were found.

The FBI went on an intense hunt to bring justice for Coler and Williams, which focused on Peltier as a known AIM member. An AR-15 rifle tied to Peltier turned out to be critical FBI evidence.
On June 1, 1977, Chief U.S. District Judge Paul Benson sentenced Peltier to two consecutive life terms.

Over the years, there’s been calls to give Peltier clemency. Both President Barack Obama and Donald Trump ignored them.

On Oct. 8, 11 members of Congress repeated the plea to President Joseph Biden and FBI and Bureau of Prison authorities.

“We write to request the expedited release of Mr. Leonard Peltier from the Coleman Federal Correctional Complex in Florida and request that Mr. Peltier be granted clemency,” the collective wrote, which included U.S Rep. Teresa Leger Fernandez, D-N.M., and Melanie Stansbury, D-N.M.

A spokesperson in Stansbury’s office said congressional delegates want the circumstances of what happened during his trial re-examined.

“The trial was riddled with evidentiary and procedural concerns … Mr. Peltier has yet to receive a fair trial that is free from constitutional violations,” the congresswomen said in their Oct. 8 letter.

Jim Harvey, a spokesperson for the Albuquerque Center for Peace and Justice, said, “I am very happy this is happening. We are grateful to Representative Stansbury for taking the lead on something that is long overdue.”

“We believe he was railroaded,” he said. “It was a kangaroo court to use an old phrase.

The FBI’s Res Murs investigation states that agents Williams and Coler had been killed at close range by a .223 type bullet. Peltier was identified as the only person in possession of a weapon that would fire a .223 type bullet at the time of the murders. The weapon was an AR-15 rifle.

But according to the Free Leonard Peltier website, questions remain about Peltier’s use of the AR-15, remarking that evidence was concealed.

Still, when the case went to the Eighth Circuit Court of Appeals, Peltier’s conviction was affirmed the second time.

“When all is said and done, however, a few simple but very important facts remain,” quotes the FBI from the Res Murs investigative report. “The casing introduced into evidence had in fact been extracted from the Wichita AR-15. This point was not disputed.”

The congressional delegates note that their request is also based on the federal authorized response to the COVID-19 pandemic that calls for the release of elderly inmates and those with underlying health conditions.

According to the press release from Stansbury’s office, Peltier’s health conditions include diabetes and an abdominal aortic aneurysm.

“Mr. Peltier is 77 years old and suffers from severe health conditions, including diabetes and an abdominal aortic aneurysm that can be lethal if ruptured,” states the release.

In addition to the Albuquerque Peace and Justice Center, Stansbury’s office identifies the following individuals and groups who have called for Peltier’s release: Amnesty International, the National Congress of American Indians, the late Nelson Mandela, the Dalai Lama, Archbishop Desmond Tutu, Mikhail Gorbachev, Mary Robinson, former president of Ireland and United Nations high commissioner for human rights; and the European Parliament, the Belgian Parliament, the Italian Parliament, the Kennedy Memorial Center for Human Rights, Rev. Jesse Jackson, Rigoberta Menchú, seven Nobel Peace Prize laureates, Rage Against the Machine, Pete Seeger, Carlos Santana, Harry Belafonte, Gloria Steinem, and Robert Redford.
“We stand firmly in support of (clemency),” Harvey said in reference to the Center for Peace and Justice. “We will not be silent and even though his voice is muted while he is in prison, we will be his voice until then.”

Harvey said the center is starting a letter and phone call campaign.