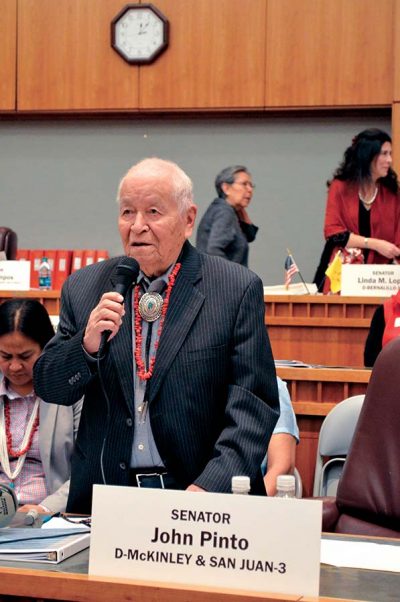 Pinto’s colleagues referred to him as an American treasure, a legend in his own time, a hero who advocates for all people, and a tenacious fighter for his constitutes, the majority of whom are, like him, members of the Navajo Nation.

“The outpouring of respect shows that as the senior member of the New Mexico State Senate, he is revered, respected and loved by all members of the Senate including the lieutenant governor (John A. Sanchez),” remarked Campos, who said that he’s worked with Pinto for the past 28 years and considers him his dearest friend.

The memorial details Pinto’s birth in 1924 in Lupton, Arizona, on the Navajo Nation and his attendance at a boarding school, which he attempted to run away from several times. He graduated and went on to earn a bachelor’s degree and a master’s degree in elementary education from the University of New Mexico.

His service included serving as a code talker in World War II, resulting in a congressional silver medal of honor; a lengthy teaching career in Gallup-McKinley County School District; outreach work feeding the homeless in Gallup; and political leadership for the Breadsprings, Bááháálí, and Red Rock chapters, Eastern Agency Council, McKinley County Commission and the New Mexico Senate for the past 42 years.