Stay home, save lives?: Lizer seen with FEMA officials after stating he would quarantine 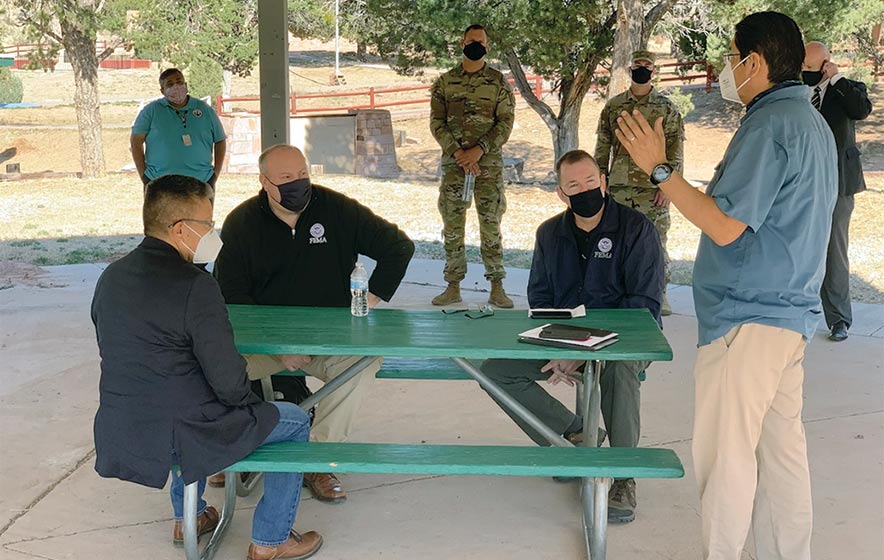 Courtesy photo
Vice President Myron Lizer, left, wears a mask while meeting with FEMA officials on Oct. 1 in Window Rock. President Jonathan Nez stands at right. Lizer, on Sept. 28, said he would be quarantining after his trip to Washington, D.C., where he participated in a rally on Sept. 26.

After returning from his four-day trip to Washington, D.C., Vice President Myron Lizer said on Sept. 28 he would self-quarantine.

But a photo taken on Oct. 1, showing Lizer seated with a mask on and within six feet of a Federal Emergency Management Administration official, appears to contradict his words.

President Jonathan Nez, also wearing a mask, was also present at the meeting. In the photo, he is standing and appears to be slightly farther away from the officials.

Lizer said last Monday during a telephone interview he would be quarantining after he traveled to a prayer march that was held at the National Mall on Sept. 26. At least one person who was with Vice President Mike Pence and other high-level officials at the march has tested positive for COVID-19, according to USA Today.

During a virtual meeting that was streamed on the president’s office’s social media page on Oct. 1, Lizer, not wearing a mask, said he took a test.

“Some of you are probably seeing I don’t have a mask on,” he said. “So, I got tested. It’s negative like I expected it would be.”

Lizer said he was invited to “pray for the nation” by the Billy Graham Evangelistic Association.

The vice president said he left for the nation’s capital on the night of Sept. 24. Two days later, on Saturday, he was seen in a video standing amidst tens of thousands of people.

For more than five minutes, Lizer did not wear a mask, which appears to contradict a Sept. 25 president’s office press release, which stated that coronavirus outbreaks were “related to traveling off the Navajo Nation.”

By the time the statement was released, in which he is quoted informing the Navajo people there was an increase in COVID-19 cases on the reservation, Lizer was already in Washington.

“We see increases in all surrounding states and counties of the Navajo Nation,” Lizer was quoted in the Sept. 25 press release. “Restricting individual movement on the Nation prevents family and community outbreaks and minimizes the strain on medical response capabilities. We will overcome this pandemic eventually.”

A “shelter in place” order was re-issued on Sept. 22, when more than 40 cases were reported in Ganado, and a dozen others in satellite chapters in the Eastern Agency.

“These cluster cases are a direct result of family gatherings and off-reservation travel,” the public health order stated. “All individuals on the Navajo Nation shall shelter in place and must stay at home and strictly limit movement within and outside of their immediate communities.”

While Lizer seemed to downplay his four-day trip, President Donald Trump tweeted on Oct. 1 he and the first lady had tested positive for COVID-19. Lizer did not say if he met – or if he was near – Trump or Vice President Mike Pence during his trip. But he tweeted well wishes to the president 20 minutes after Trump made his announcement.

“The Navajo Nation supporters are with you and praying for you POTUS & FLOTUS! He Heals! God is Good!” Lizer tweeted on Oct. 1.

On Saturday, he wrote of Lizer, “he’s good.”

Since then, after many inquiries from the Navajo Times about whether Nez and Lizer had been tested, Touchin said on Tuesday morning both had been tested and both were negative.

A mother of seven, whose family had all contracted COVID-19, said on Sunday she was surprised Lizer was not adhering to the public health orders that have been in effect since the pandemic reached the reservation in March.

On condition of anonymity, she said Nez and Lizer “should just practice what they say.”

“There are lots of people who are looking up at them,” she said. “I thought they say no large crowds?”

The single mother said they lost a family member to the coronavirus and her father also contracted the virus and was returning from the University of New Mexico Hospital on Monday.

As for Nez, he explained on Friday he does not “breathe over” Lizer’s neck and regulate everything he does.

“We divide our tasks and there is a lot of things that come before us as leadership,” Nez said, making no mention that Lizer may have violated the re-issuance of the shelter-in-place order.

“He does know what he’s doing,” Nez said. “He explained what he did. That’s gonna be something the Navajo people are gonna have to consider.”

Nez, since the outbreak, has helped hand out donated food and personal protection equipment across the reservation, even after both he and Lizer were exposed to frontline worker who tested positive on April 7. The pair quarantined for 14 days after the exposure.

On Friday, Nez traveled to several communities, including Ganado, where the Department of Health reported an outbreak in the Sept. 22 public health order. He was wearing a cap, a medical mask and a face covering that covered his ears. He also was wearing nitrile gloves.

“So that’s our partnership,” Nez said. “I don’t breathe over his neck and regulate everything he does. We delegate certain responsibilities on one another.”

He added that their administration had campaigned on being out in the communities.

“We won’t be stuck in Window Rock because that has always been the perception is that leaders, when they get elected, they’re just always inside Window Rock,” he said.

“This virus will attack you, it doesn’t care who you are. The only way to stay safe is to wear a mask,” Nez said. “As you can see, I usually wear one of the medical masks and then I wear a covering over it.”

The Navajo Times reached out to Lizer via text, asking how his quarantine was going and what his test results were. He never responded.

Lizer was quoted in the Oct. 1 president’s office press release, saying the tribe’s efforts aimed at reducing the number of COVID-19 cases “on a consistent basis.”

“We may have won a few battles against COVID-19, but the war continues,” he said.