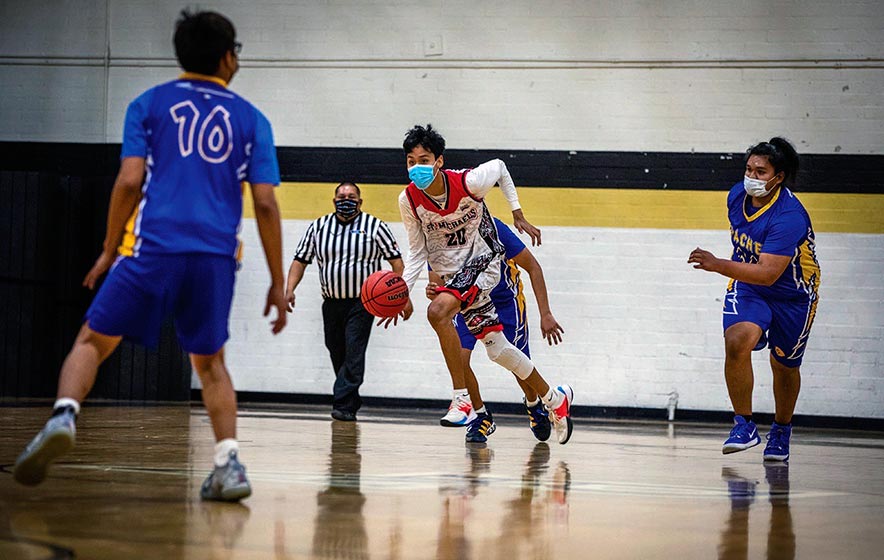 Navajo Times | Sharon Chischilly
St. Michael Dayshon Dalgai (20) dribbles the ball in transition against the Fort Thomas Apaches on Feb. 12, 2021 in Eagar, Arizona. The Cardinals were the only rez school to play during the pandemic while the others sat out during the 2020-21 school year.

The long-awaited return of prep sports took center stage for the 2021 year.

In Arizona, athletic directors across the rez braced for the impact COVID-19 would have, but according to Chinle AD Shaun Martin it was unlike anything he had ever seen.

“I would have never thought that something like this would ever happen,” Martin said, “to force us to shut down schools and cancel sports to save our people.

“We always hear and been told about the Spanish flu and other pandemics that have happened in the past,” he said, “and there have always been horror movies about breakouts and things like that.

“But through my coaching and teaching career I never thought we would be in the situation we are in now,” he said.

Schools, and sports along with them, were canceled in the fall of 2020 and the spring and summer of 2021.

However, the directors didn’t do nothing during this time. Their focus, as always for directors like Ryan Dodson of Window Rock High, was to help their kids.

“So, all of us as athletic directors took on other responsibilities and the shift change from athletics to community,” Dodson said. “(The question was) what can we do to help out communities battle this pandemic?”

During the height of the pandemic, directors helped with food deliveries for their isolated kids.

They assisted other teachers with online learning and some transformed their schools into improvised COVID testing sites.

All the while, they hoped for a returned to sports soon.

Dodson, speaking on behalf of the other schools in the northeast section of Arizona, was able to secure a deal with the AIA to allow the northeast schools to make their own sports calendar separate from the AIA.

And although the plan got approved the schools were not able to participate due to Navajo Nation restrictions as the entire sports season was canceled.

One of the few schools in Navajo that had a sports season was St. Michael Indian School.

Director Carl Adams explained that as a private school they could decide for themselves if they wanted a season or not.

Adams was fully aware of how lethal the virus was, but said the decision to have sports that year was made with the children’s welfare in mind.

He thought if the school hosted sports, then at least they could regulate the student’s safety.

He also said sports helped with the students’ mental health and having such activities would help with their growth and development.

“The kids were happy that we got the season,” Adams said. “They were happy they got to represent the Navajo Nation. Our basketball girls got knocked out in the final four yesterday but they were humbled to be out there to represent us and knowing that we can do sports safely.”

When the AIA ended their mask mandates in late 2020, St. Michael kept theirs and Adams said it would remain for safety precautions. Others schools from the rez followed suit.

It wouldn’t be until the fall of 2021 that rez teams returned to sports. 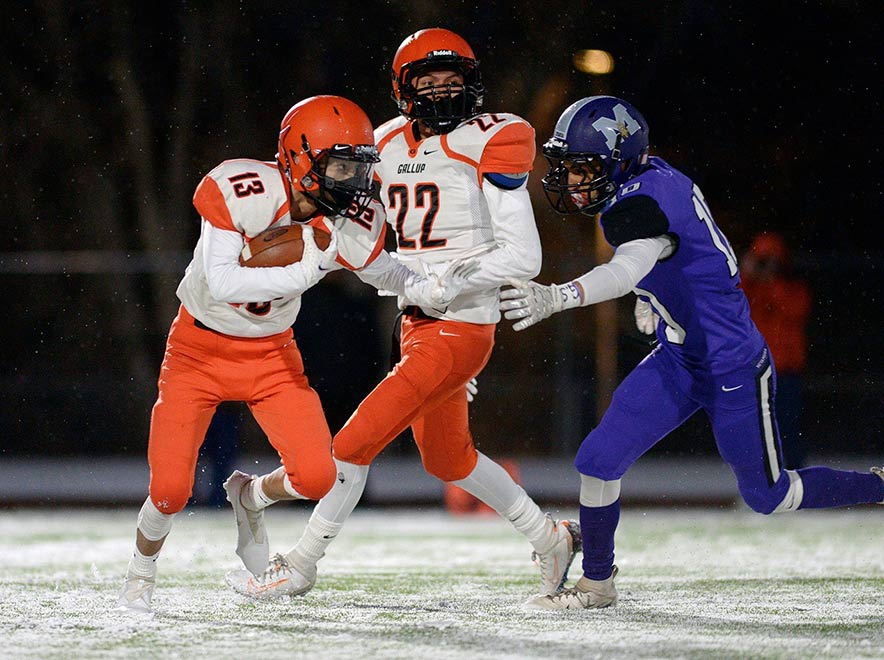 Navajo Times | Donovan Quintero
Gallup Bengal Fernando Beaza (13) runs for yardage as Miyamura Patriot Seanmatthew Garcia (10) runs at him to tackle him on Mar. 26, 2021 in Gallup. The delayed fall sports season final got its start on Feb. 22, 2021.

In New Mexico, the start date for the return of prep sports was pushed back several times before the New Mexico Activities Association got the go-ahead to start making plans for athletes to get back on the field on Feb. 22.

The NMAA got the approval from the New Mexico Public Education Department and Gov. Michelle Lujan Grisham as school districts were allowed to start hybrid learning on Feb. 8, which is a requirement to even play sports.

“The NMAA is extremely excited about the return of athletics and activities and the opportunity for our students to compete,” said NMAA Executive Director Sally Marquez. “We are very thankful for the hard work and consideration of the governor’s office, Department of Health and the Public Education Department.”

After getting the go-ahead, the Gallup-McKinley County School District started making plans for fall sports on Feb. 22.

“I’m very excited,” said Ben Chavez, the athletic director for GMCS. “I’m excited for the kids because the idea of them being isolated and trapped indoors for the past 11 months is not good for them.

“I know that their social and emotional well-being has been affected and I think we’re taking a step in the right direction to get these kids back into some sort of activity,” he added. “They’ll be able to interact with their friends and get some normalcy back into their lives.”

“The kids have been waiting for this opportunity to play sports again for a really, really long time,” Pete said. “They’ve been very patient and I’m happy that they’re going to go out there and enjoy the sports they love to play.”

Under a revised sports calendar, each season was whittled down to a few weeks.