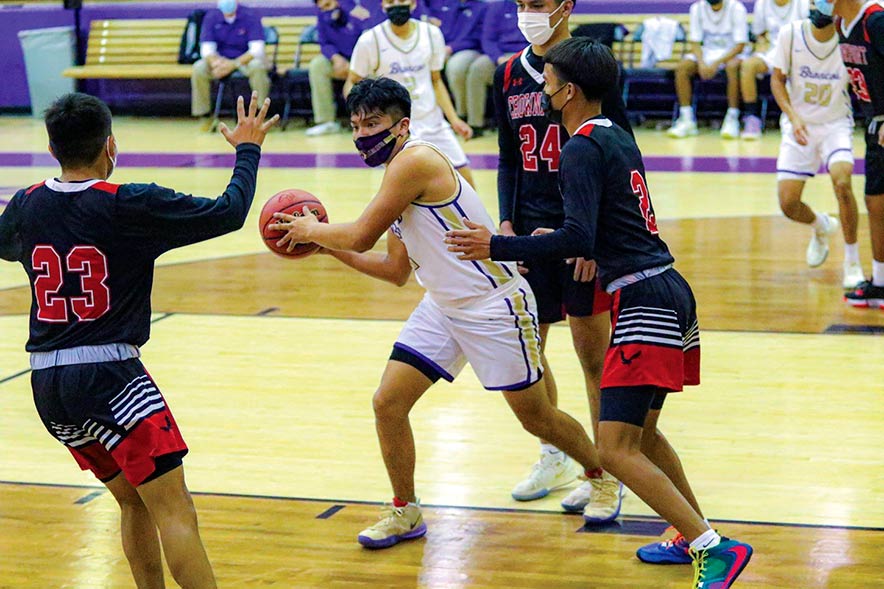 Navajo Times | Cyrus Norcross
Kirtland Bronco Kragen Cadman (11) looks for a player to pass to as the Crownpoint Eagles guard him on Dec. 23, 2021. The Broncos defeated the Eagles by a 61-53 count.

The Kirtland Central Broncos had to stave off a few rallies to upend Crownpoint on Dec. 23.

After trailing by as much as a dozen points in the second half, the visiting Eagles got as close as four points before succumbing 61-53 to the Class 4A Broncos.

“They challenged us and that was good,” KC coach Brian Dowdy said of the Class 3A Eagles. “We needed that. I thought we responded well, though. We did a lot of good things that we’ve been working on.

“We’ve been trying to improve rebounding and cut down our turnovers,” he said, “and I thought we did a lot better on both of those things tonight.”

Junior guard Satchel Hogue led the Broncos with 21 points, including 10 in the second as KC closed out the first half with an 8-3 run for a 29-21 halftime cushion.

Crownpoint, however, didn’t fold as a 3-pointer from junior Taye Harvey jumpstarted a furious 13-2 rally.

After Harvey’s basket, the Eagles scored four straight baskets, including three in transition to pull within 42-39 with 11 seconds to go.

At the other end, the Broncos got a buzzer beating three from sophomore guard Elijah Gray, who finished with six.

“That was huge because you could feel the momentum change,” Dowdy said. “Right before that we had a lapse and they scored and when Elijah hit that it got everybody excited again.”

The Broncos used that momentum to seize a 54-43 cushion but once again the Eagles made it a bit interesting.

They got as close as 54-50 after junior post Tyrell Harvey completed an old-fashion 3-point play with 2:47 to go.

KC, however, had a little more left in the tank to hold Crownpoint off.

“We played a good game but they have a good bench over there,” Crownpoint coach Thale Goodluck said. “Their coach rotated them out and I had to work with one less player.”

The Eagles lost junior Tylon Tsosie to an ankle injury on their first possession of the game.

“It was hard losing him,” Goodluck said. “I think it would have been a different outcome if we had him in the game, but I can’t sell them short.

“My team played their best and none of them gave up,” he added. “They all played a good game.”

Dowdy said it’s not unusual for him to utilize his bench as he went 13 players deep.

“That’s not uncommon for us,” Dowdy said. “We got a lot of different guys that contribute in different ways, so we’d like to use them, especially if we get into different trapping or pressing situations. We try to keep our guys fresh, so we try to utilize everybody.”

As a team, KC made eight treys to even its record to 6-6 overall.

“We got some good three-point shooters and we certainly used that as a weapon but we kept telling them that, man, there’s lanes open,” Dowdy said. “We got to stop settling for threes all the time because we can get those shots anytime.”

The Eagles, meanwhile, got a game-best 22 points from Archie. The junior post was very effective inside as he got to the free throw line 17 times while making 10.

“He has some real good post work,” the KC coach said of Archie. “He really killed us the first quarter and half, so we had to make some adjustments to slow him down.”

“Tyrell played a really solid game,” Goodluck said. “He played it smart and he got to the foul line.”

With the loss, the Eagles dropped to 8-3 overall as they will enter the new year playing Bosque on Jan. 6.

“I like where we’re at,” the Crownpoint coach said. “I think we’re sitting solid and I hope to have my point guard back for the start of 2022.”

KC will be in action on Jan. 4 when they travel to Thoreau before playing Piedra Vista on Jan. 7.

At 6-6 overall, Dowdy said they’re looking to pick up a few more wins before the start of the district season.

“I feel like it’s us and Gallup again,” Dowdy said of the District 1-4A race. “It’s been that way a couple years now. Gallup is struggling right now, you know, but they can get it going anytime.”

Before last Thursday’s game, the Broncos were coming off three consecutive tournaments. And although they started the season at 2-6 overall, they have won four straight, which includes the tournament title at Pojoaque Valley.

“I’m very proud of them,” Dowdy said. “When we were 2-6, we could have easily say, ‘When does baseball and track start?’

“But they didn’t do that, you know, they’ve come together and they keep grinding and our practices were great all week,” he said, “so that tells me we’re in a really good spot.”