Cardinals end season at quarterfinals after playing through pandemic

Last Saturday the St. Michael softball team faced off against Superior High at the Rose Mofford Complex in Phoenix during the state’s quarterfinals. It was a close, hard-fought battle that went on for three hours and ended with 13 to 9 for Superior High.

“I think it was still a successful run,” said Cardinals coach Karen Tom. “Even though we did lose that final game, we did very well in performing at the state tournament. We had some minor errors but overall, I think we performed very well.”

In third inning there was an accident as a Panther on 3rd ran for home but catcher Sunshine Burnside caught and held up the ball only for the Panther to run face first into it. She was on the ground for a few seconds but got back up to applause from both sides of the field. Maya Ross would hit another double in the third inning.

In the fourth the score was tied 5 to 5. 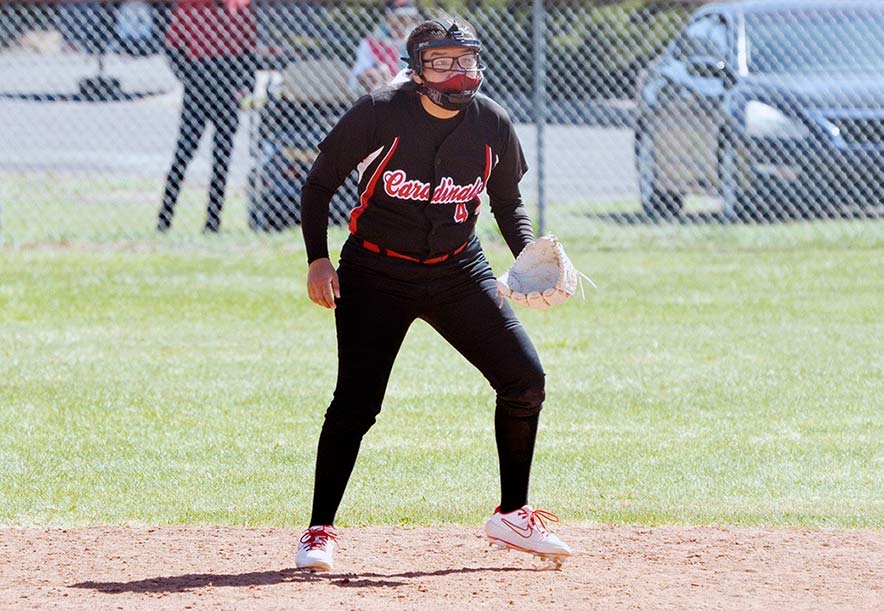 Submitted
St. Michael outfielder Kalynn Smith get her glove ready to field the ball in this file photo. The Lady Cardinals reached the 1A state quarterfinals, losing to Superior 13-9 at Rose Mofford Complex in Phoenix.

In the fourth inning, a Panther hit a homerun and the score was 5 to 6. When the Cardinals went on offense, Jalin Perry hit a fastball back towards Superior’s pitcher and she ducked, almost hit by the center-bound ball. Later, Perry would steal home and again the score was tied, 6 to 6.

After a series of defensive errors, Superior switched out their pitcher who had been pitching for three games straight. Despite the change though, the Cardinals loaded the bases and were able to pull ahead with 9 to 6.

In the fifth inning there was another accident as a Panther tried to steal 2nd, she attempted to jump over the Cardinal second baseman and landed hard on the base. A timeout was called as she was down for a minute before getting back up and was cheered by both Cardinals and Panthers.

In the sixth inning the Panthers stepped up their offense and the Cardinals’ pitcher, Ross, accidently hit two players. Coach Karen Tom called a time out and switched Ross with Simpson. The bases were loaded and Panthers scored four points before Simpson struck out the last player, ending the score with 9-11.

Ross had two strike-outs while Simpson would get four. Sunshine Burnside acted as catcher and caught two pop balls during the game and hit a double in the 6th.

Santana Delgahi meanwhile had been playing in the center outfield and caught three balls that fell her way.

In the 7th inning, the Panthers were hitting doubles and got two more points as St. Michael struggled to keep up. Simpson struck out two players. In the bottom of 7th, the Panthers’ pitcher was visibly tired as she threw fastballs. Despite the exhaustion though, she struck out all three Cardinal players and ended the game.

The final score was 9 to 13 Superior High, ending the Cardinals’ season that night. Jolynn Smith, Areya Hanley, Maya Ross, Aurianna Quintana and Sunshine Burnside are seniors and they have played their last game.

“I think we had a good season,” said Maya Ross. “Overall, I think we only lost four or five games, but that was pretty good and the rest we won. … We are fortunate to have a season and especially for us seniors because last year we didn’t get to have a season due to the outbreak, then the pandemic and finally we were able to have this season and I’m thankful and fortunate to have it.”

The Cardinals were the only team from the Navajo Nation to play this year due to COVID-19.

“We feel like we had to really step up our game because we weren’t just representing our school, but practically our whole Navajo Nation,” said Coach Tom.

Knowing the risk that the virus represented and with a few members of the team having personally been affected by the virus, the team took it seriously. They became one of the few teams in Arizona to wear masks consistently, even when they were playing. The mask mandate was lifted earlier in the season, but Tom said they continued the practice to ensure safety among the students.

“We really wanted to show respect in regards to our family and the communities that we visited when we play games,” Tom said. “We had to uphold the highest standard when traveling, showing our respect to the Navajo Nation and our state because the Navajo Nation led in COVID cases at one point, having the highest rate in the world at the time and we wanted to show respect and let everyone know we’re doing our part in staying safe and respecting everyone’s safe.”

Her team felt the same way when it came to wearing facial coverings as well.

“We’re setting an example representing the Navajo Nation,” Ross said. “Here we have to wear a mask all the time, while in Arizona not many people wear a mask. I think we set a good example representing the Navajo Nation, but Page I believe were wearing masks too, they were the only team we played against who also wore masks throughout the game with us.”

For this season, Tom said one of the biggest challenges that they faced was mental, byproducts of the pandemic. From being in lockdown to losing loved ones, there were a lot of hardships that the team had to overcome.

“We had to do a lot of regrouping,” Tom said. “Not really practicing much, but more talking and addressing that they were in a different mental state and we were establishing our goals and that was moving from one game to the next with each other, reminding each other to be safe and allowing the girls to be with family and more important things and not pressing them to get a win, just putting their first foot forward.”

For Ross and her teammates, despite the challenges they were happy to play this year and felt like this is something they’ll remember for a long time.

“Fast forward a few years, I think I’ll look back on this and think, ‘Oh my gosh I can’t believe I played in a pandemic,’” Ross said with a laugh. “And we still had a softball season, but I think I’ll look back on it and be thankful for it. I think of my other friends and former teammates I play with during the summer and travel ball. They didn’t get to have a season like I did …

“Going to state we did pretty good,” she added. “We wanted to win the title but we fell short in the quarterfinal. But we played our hearts out, we gave everything we had and we really wanted it but we just came short on that game. I’d say it was a good run for my last season at St. Michael … With the state rankings we were No. 3 for a time before it dropped, but that was still pretty high for St. Michael history for state playoffs.”

Tom is proud of her team for the strength and resilience they showed this year. Coming back from hardship and making it so far in state is an achievement considering all they had to face this season.

“I feel that this year particularly has been one of our toughest, it wasn’t as much in competition but more mental and I think we overcame so many things, and really more than half the team, we did have the virus. And just building our bodies and mental state back up was the hardest part, I can’t be prouder to be able to reach the state level of competition. We played some really amazing teams and they definitely challenged us, but the win here was just getting there.”