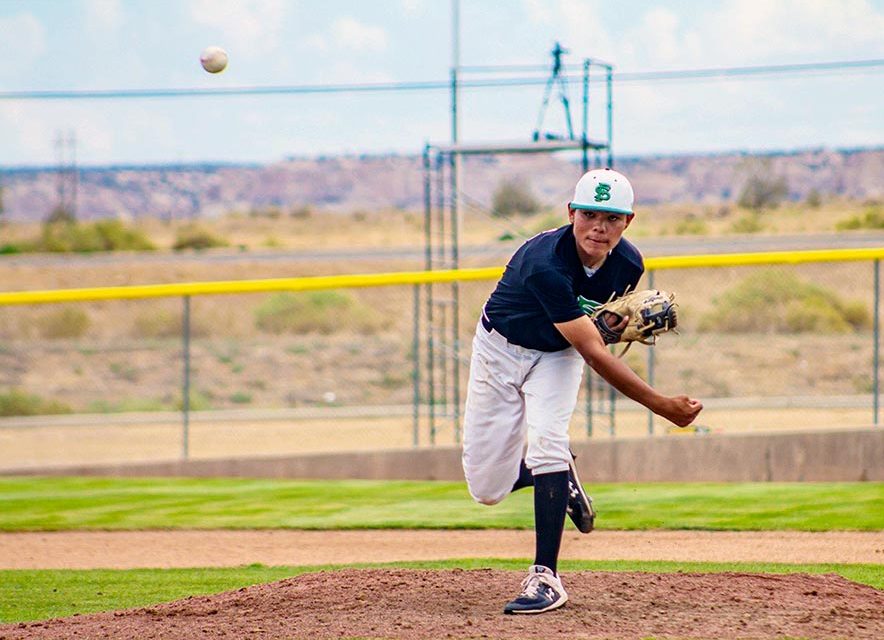 The Connie Mack World Series is an event that lasts nearly two weeks and brings in crowds from across the nation and beyond. There are parades, cookouts and entertainment, but the main attraction is the baseball teams that pit the best high school players from across different countries against one another.

This year the local team, the Farmington Stings filled with a mix of new sophomores and experienced seniors, qualified to play.

The first game was last Friday morning at the Farmington Sports Complex where the Stings played against the Enid Majors from Oklahoma.

One of the players was soon-to-be senior Keagan Scott, third baseman, who was able to tag out a runner at third during the first inning, but later suffered an injury when he jammed his finger, putting him out of the game.

Despite that, he was still in good spirits. Part Navajo and part Sicangu Lakota Nation of Rosebud South Dakota, he was thrilled to be a part of the series.

“It is a dream come true,” Scott said. “I always came to watch the Connie Mack World Series when I was a little kid, and always dreamed of playing here too.”

The Stings had trouble hitting the ball as they played against strong athletes who hit the balls into the outfield and threw fast pitches.

In the third inning, the Sting’s starting pitcher Bryant Elliot was switched out with senior Elijah Long.

“It feels awesome,” Long said when asked about playing. “It is not like high school ball where we play local teams. There are cool guys coming from all over, they are the real deal, and it makes you realize how good these guys are. For me it makes me want to get better to become like these guys.”

Long was able to get one strikeout while the Stings defense rallied, but couldn’t hold back the Majors’ onslaught. When it was their turn to bat, the Stings had trouble getting players on bases, but Ryan Chang, Jace Whalen and Kellen King were able to hit singles. And Hunter Martin hit a homerun, which jubilated the crowd.

Kyler Krakow hit a ball to left field and was tagged at first, but he was able to bring one player home.

Making risky plays, Whalen was able to steal home when no one was looking. Later, King ran to third when he slid and the ball passed the third baseman’s shoulder, making King scrambled back to his feet and run to home.

The game ended after six innings with the score being 12-4 for the Majors.

“We are really good, though with this game, I don’t know what happened,” Scott said. “We just couldn’t really play; we would hit the ball but it would go right to them. We are going to definitely step it up the next two games. We are way better than this.”

At the next game later that same evening at Ricketts Park, a cold rain set in with thunder being heard in the distance but no lighting. The rain would occur on and off throughout the game, annoying the players as it caused errors on both teams as athletes slipped on the wet grass.

The Stings went against the Colton Nighthawks from California.

This time Raichel Zachary pitched for the Stings. In the first inning the Nighthawks quickly gained dominance, taking advantage of a wet field as they hit their balls into the outfields and scoring 8-0 before end of the first inning.

After that it became a battle of attrition as the next few innings passed without another score made. Each team’s defense was working overtime and making it nearly impossible for the other to progress. Zachery struck out one opponent that night.

The game ended 8-0 although the score was arguably worse than the first game, the Stings’ defenses were better maintained and although the Nighthawks made a lot of scores in the first play, the Stings made sure they didn’t get another.

“Last night was rough, and in the rain, with the weather conditions it was something that ultimately came down to a pitching game,” Long said. “Defense wise we just could have been better on that side but overall, we can’t do anything about it and just move on.”

Going against the Tennessee Knights

The final weekend game was held at Worley Filed on Saturday morning. This time the skies were clear and the day quickly heated up as the Stings faced the Knights Baseball from Tennessee.

Scott recovered from his injury from the previous day and took to the field as third baseman. Also joining him was senior Kioni Benally as first baseman, both boys tagging out opponents and catching balls that came to their respected bases.

“Being a part of this tournament has been a great experience, it’s really great,” Benally said. “I remember as a little kid looking up to the big kids playing in Connie Mack, now I am a big kid in Connie Mack.”

For the third game, Aiden Talcott took to the pitch, striking out two players. During the second inning, left-handed Max McGaha became the next pitcher. He struck out two opponents before he was switched out with William Eberhard.

Martin hit a homerun with one RBI.

The game ended 12-9, brining the Stings close to defeating the Knights, the most even playing field they had so far.

“Honestly, we probably could have done better,” Benally said. “But we also tried coming back in the end, but it could have gone a lot better.

“We had some calls that didn’t go our way at the plate but as a team we did great. It is a great brotherhood; we play for each other. They became family as soon as they stepped on the field with us.”

For Long the game isn’t over yet and he is confident they will steadily improve in the next game.

Still, it’s a pleasure and honor for him to be playing at the World Series and is happy his family knows he made it there.

He played in the Triple Crown Word Series twice and once at Cooperstown Dreams Park in New York. The Connie Mack World Series will definitely be a new highlight for him.

“I’ve been playing this game since I was little, I love this game to death, it is like my life,” Scott said.

The Stings are still in competition with another loss on Monday and one more game left in tournament.

Overall, the players said it was a good experience and coach Kary King commends his team.

“I am excited for them, so many of these guys were born here and they are local, so they have had dreams, I am sure since they have been little boys, about playing in this tournament,” King said. “So, for them to get this opportunity, I am pleased for them in that.

“From a head coach stand point I am also thrilled about the development opportunity it is providing the players for next year. This is basically our high school team so all these guys should be better from facing this type of competition.”