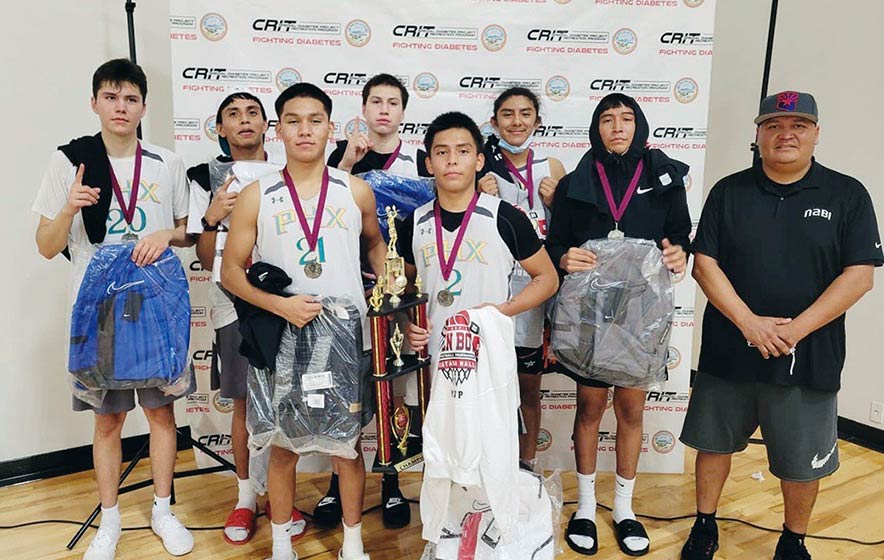 The objective in forming the Phx Hotboyz four years ago seemed pretty simple for Chet Yellowman.

He started the club team so that his boys could make their respective high school teams. But after that initial year the accolades started to pour in for the kids that he coached.

“You name it, those boys are up there,” he added. “They either got First-Team, Second-Team or Honorable Mention All-Conference so I’m beyond proud of what they’ve done.”

Looking back, the Navajo/Sioux Native said he didn’t know what to expect from the team he started from scratch in 2017.

The three individuals played for various teams in the Valley with Chet suiting up for Verrado High School while Begay played at Estrella Foothills and Roberto donning the Corona del Sol uniform.

And after tryouts, he picked up Diné players Timothy Curley (Westwood High) and Matthew Tsosie (Glendale High), and of those initial recruits, four had graduated last May during the peak of the ongoing pandemic.

Despite losing four core players, the Phx Hotboyz picked up where the left off by finishing as the reserve champion in the Hoops League earlier this year.

They also made the Final Four round at the Native Nationals Juniors Tournament in Las Vegas and earlier this month they finished in the top 8 at the NABI basketball tournament.

Last week, they captured the title at the CRIT Teen Boys Tournament in Parker, Ariz.

“When I started this club team I honestly didn’t expect us to do much,” Chet Yellowman said. “I just want the boys to be competitive and I’m just blown away with how far they’ve come. Some of them have a chance to play at the next level with JUCO and at the D-3 level. They have a chance to get there and get an education.”

Diné player Gabriel Pesqueira is one of those players. He’s been playing on the club team for four years and he’s currently in contact with SAGU, a Phoenix college team. He’s also done some workouts with the Chandler-Gilbert team.

“I’m still deciding on that right now,” Pesqueira said, who added that he’s been dreaming of playing at the next level after taking basketball serious in the sixth grade.

“That’s all I want do, which is play basketball,” he said.

Pesqueira said he got his first offer during the summer of his eighth-grade year and since then he’s been striving to get better.

“I’ve learned a lot,” the recent Corona del Sol graduate said. “I think this game has taught me a lot about respect. There are a lot of people from different areas of AZ that I really didn’t know of and just seeing the talent out there for Native American players is what amazes me.”

At 6 feet, 2 inches, Pesqueira is one of the tallest players on the Phx Hotboyz team. Despite his team being undersized, Pesqueira said they can all play.

“We can run up and down the court with anybody,” he said. “Every time we play we move the ball well and honestly I think we just have great chemistry even though we play for different high school teams.”

That chemistry was on full display during the CRIT tournament in Parker last week as the Phx Hotboyz captured the eight-team tournament.

Of the seven boys that made the tournament, three were named to the All-Tournament team with Roberto Yellowman earning the MVP award. His teammates Robert Smith and Leo Scott Jr. were also recognized.

“We did really good at that tournament,” Roberto said. “We had a lot of ball movement.”

Prior to that tournament in Parker, the Phx Hotboyz had a great showing at the 18th Annual NABI tournament as they took Young Guns, the eventual national champions down to the wire. The final score was 59-52 in favor of the Washington-based team.

“I think we did OK, but I feel like we didn’t do our very best,” Roberto said. “I think if we played our very best we could have won the tournament. It came down to simple mistakes.”

As one of the players that is set to phase out this year, Roberto remembers when they first got started.

“We were actually pretty bad,” he said. “It was until I got to my sophomore year when we started to win more games and get more noticeable. You know it was kind of rough because we all started out at the bottom.”

His uncle remembers those days as well. But since then they have contended for just about every tournament they’ve entered.

“We probably put in 20 games before we started winning tournaments,” Chet said. “It took us some time but I had a really good group of boys that really meshed well with each other.”

Chet said they had an amazing run and with most of his player having graduated he’s going to focus on building a club team around his 11- and 13-year-old daughters.

“I’m going to start them up and we’ll see what we can do with them,” he said. “I already have some Native girls that want to run with us.”