Mozart Gabriel is a born artist. 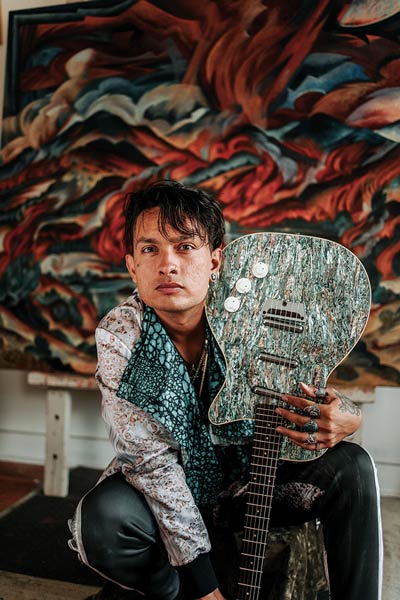 Courtesy photo | Mozart Gabriel
Mozart Gabriel said he misses the energy of punk in music today. He said being lonely with one’s songs is a great personal experience. He said his songs are a truth that he’s trying to tell.

Growing up with a name like Mozart, one would think he was a born musician. Instead, Mozart spent much of his early career immersed in Native cinema.

He was awarded a fellowship as a writer with the Sundance Institute and landed small parts in television and film, including the 2003 Ron Howard film, “The Missing.” He also worked in Nashville producing music videos.

Today, Mozart is in love with music and set to release his debut album, “Eager Within the Fire,” on Nov. 26.

The album is a collection of songs that he wrote over the past decade and was recorded in Barcelona, Spain, and mastered by TheHitLab in Nashville.

The music on the album is healing, he said.

“(Music is) a place that I really needed for my mental health,” he said. “I recently celebrated my two-year anniversary for sobriety. Music saved my life.”

“Hold Back,” the third track on the album, documents Mozart’s sobriety. He wrote the song after his ex-fiancé left him. He was drinking excessively at the time.

“Hold Back” begins with emotionally-charged vocals underpinned with delicate guitar chords that build and resonate while Mozart’s pained vocals speak of loss and trepidation. A blistering guitar solo carries the song off into the horizon of hope and sobriety.

While many of the songs are rooted in heartbreak and emotion, the seven tracks on the “Eager Within the Fire” are decidedly rock and roll interspersed with more aggressive tracks like “Leach.”
Throughout the album, the drumming is stellar.

“(The songs) subconsciously came from my pueblo and the ceremonial songs,” he said. “It’s about me finding who I am through the journeys I’ve been through.”

Mozart spent time between his mom’s home in Taos and his father’s home in To’hajillee and Gallup. He also experienced overseas.

“Eager Within the Fire” was produced during a COVID-19 quarantine. Mozart spent three years in Barcelona and said his life in Venice, Italy, was also referenced in his album cover art.

“My first experience outside of the reservation was growing up in Vince, Italy, as a kid,” he said. “As Venice is a small village itself, it reminded me a lot of home on the rez.

“That was the beginning of deciding to choose art and storytelling as my career,” he said.

The album cover depicts Mozart in a renaissance painting, cradling his Gibson guitar in his arms. Feathers adorn his hair and guitar as scenes of Venice and Taos Pueblo are visible in the background. 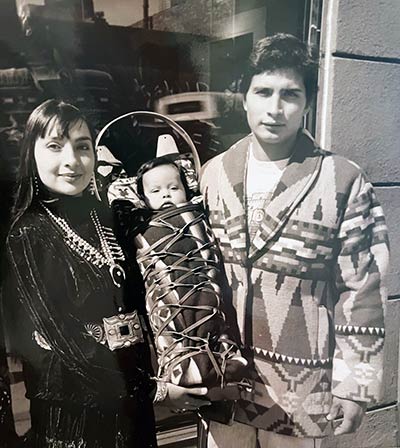 Courtesy photo | Mozart Gabriel
Mozart, pictured in a traditional Navajo cradle board with his parents, Patricia Michaels and Tony Abeyta.

Elements of Navajo and Taos Pueblo designs are visible in the tattoos and the red blanket that covers Mozart.

It was a European film screening that changed Mozart’s life forever in 2018.

The decision to crossover from film to music came after a screening of “Rumble: The Indians Who Rocked The World” at the Sundance Film Festival in London.

“I watched (Rumble) and cried my heart out,” he said. “I was like, where was this all my life.”

It’s never too late live out rock and roll dreams.

“The most important thing (in music) is to be honest and vulnerable,” he said. “The songs write themselves,” he said.
Information: www.mozartgabriel.com