The Choice NTUA Wireless Tournament was held last weekend at the Wildcat Den in Chinle. The Chinle boys came out victorious after defeating Newcomb in the semifinals and facing Hopi in the finals. 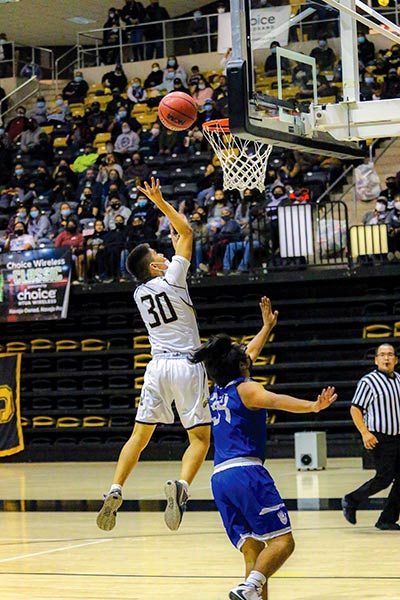 Before the conclusive championship games ended on Saturday, Newcomb and El Capitan (Colorado City, Arizona) competed for the contender award. The Eagles quickly dominated the court with its speed and height, covering the Skyhawks and making it difficult for the team to make a basket.

The Eagles won 69-37, making it its eighth win of the season.

For Newcomb, it didn’t keep up with the Eagles, but the team made some skilled shots. Skyhawk Dwayne Henio led his team with 17 points, made with one basket and five 3-pointers. Charlie Benally also made a 3-pointer for the team.

Although the Eagles won, Newcomb was the only team to make three-point shots during the game – much to the excitement of their fans.

El Capitan’s coach Derek Stransky thanks Chinle for the invite saying it was a good experience playing inside the Den in a good atmosphere. He is proud of his team for improvement since the start of the season, especially with their transitioning.

“We wanted to play more games, but other than that, it was a good tournament, great atmosphere, and a great court,” Stransky said.

“We’re trying to challenge ourselves this season, but we’re playing better and better.”

Later that night was the boys’ game for the tournament championship. It was the Hopi Bruins versus the Chinle Wildcats. Chinle quickly set the tone with Tegan Halwood making the first basket in 8 seconds. Bruin Izaiah Silas tied the game 2-2, but Chinle took off as they outran Hopi in the first quarter. Maintaining a large lead, the game ended 83 to 38, making Chinle the tournament victors.

Silas led the Hopi team with 22 points, making most of his shots in the first period. His teammate Milson Tessey made 18 points, with two being 3-pointers. Wellan Lomahoyouma also made a 3-pointer and a total of seven points.

For Chinle, Jarvis Woody made a total of 28 points during the game, eight of which were free throws. Kre’Shaun Johnson scored the Wildcats only 3-pointers of the game.

Hopi coach Rick Baker congratulated the Chinle team on the win, noting how disciplined their plays were, as well as their execution. Despite the loss, he feels like these games will help his boys’ team be better prepared the next time they face another tough team.

“We tried to hang in there with them, we tried to run with them and hold defense, we tried, and we tried hard, but they were ready for us,” Baker said. “This is the kind of game that hopefully will get us ready for our conference games.

“Those are the games that counts,” he said. “Hopefully we can learn something from this and use it.”

Chinle coach Raúl Mendoza was happy with the win but was prouder of his team’s performance. He knows they are improving their teamwork as well as adjusting to different scenarios.

He gives credit to players like Woody, Kylen Yazzie, and Latherian John. He believes the defense stood out that night and helped them keep the lead.

“I’m just happy that we played and were able to win the tournament,” Mendoza said. “This is something we needed because of this, we were able to build on that and continue to get better as a team.”

There were some concerns from some of the boys’ coaches though: too few teams to compete against. El Capitan and Hopi played only two games each and for Hopi winning one game is what got them into the championship game – something coach Baker felt unprepared for.

Chinle Athletics Director Shawn Martin explained that scheduling teams for the tournament had been difficult this year due to the effects of the COVID-19 pandemic.

Because many northern teams weren’t playing last year and the tournament itself was canceled, it forced the teams in the south to find other tournaments to play in, making it difficult to fill the slots for this year’s tournament.

This was also the end of a two-year block with the AIA, making challenging to organize a tournament bracket.

Martin had reached out and secured teams to play in the games, but a week prior to the tournament, two boys’ teams pulled out at the last minute and there was no time to fill them.

“The tournament was a result of all the new things we’re dealing with this year,” Martin said. “Distance learning and COVID protocols and all those things.

“But ultimately, we were glad to field the tournament and get some games in,” he said. “Moving forward, we’re hoping to reschedule some of those teams from the Valley and get some of the schools from up north to reconfirm so that we can at least get an eight-men team bracket next year.”

Martin added: “Thank you to Choice Wireless, they were outstanding even with all the conditions we were dealing with. They stuck by us as a partner and made sure the tournament was a success.”