Free throw shooting has been a strength for Crownpoint junior Tyrell Archie. 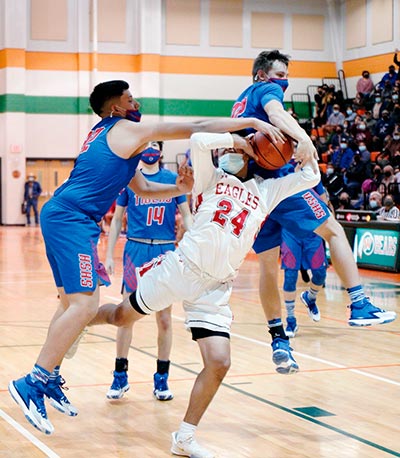 The power forward made 4-of-7 in the championship game of the 17th Annual Wingate Holiday Classic.

His final two were his biggest ones yet as Archie’s two free-throws earned the Eagles a hard-fought 48-46 win over Hot Springs on Saturday night.

“I just relaxed, like you’re supposed to,” said Archie, who was tabbed the tournament’s MVP. “I have the same routine and I just followed through, and I made my free throws.”

His trip to the charity line with one-tenth of a second stemmed from a defensive breakdown from Hot Springs.

With less than five seconds left in the contest, Crownpoint inbounded the ball from half-court and point guard Tylon Tsosie (six points) drove it inside the paint and split the defense before dishing it off to Archie (eight points).

“It’s bittersweet,” said Crownpoint coach Thale Goodluck, whose team improved to 8-2 overall. “I have a lot of confidence in my players, and if they need to, they’ll step it up and finish strong.

“Tonight was Tyrell’s night and he knew the pressure was on him,” he added. “He had to finish at the free throw line, and he did.”

Hot Springs coach Derek Bean said some calls could have gone either way in the games’ final minutes as his team was assessed two offensive charges. Nevertheless, he credited the Eagles for tripping up his defense.

“It was quick breakdown,” he said. “We’ve been stressing all weekend about being disciplined on defense and staying on the floor.”

“We might have some calls go the other direction but kudos to Crownpoint,” he added. “They came and they fought hard.”

The visiting Tigers were also clutch at the free-throw line as the team made 8-of-10 in the final quarter, including the last four from sophomore Dominic Padilla.

The Eagles shaved off 13 seconds off the clock before Hot Springs put Tsosie on the line with 21.9 seconds left.

The Crownpoint junior nailed both for a 46-43 cushion.

At the other end, Padilla was fouled while attempting a three-point shot.

Those who made free throws with 6.7 seconds tied the contest for the third time in this wire-to-wire contest.

“Those free-throws were huge in a big-time moment,” Bean said.

Admittedly, Goodluck said he called one of his timeouts to ice Padilla to no avail. He called his final one when the Eagles advanced the ball to midcourt.

“That gave us better positioning,” Goodluck said while noting that whoever got the ball had the green light to create something on their own.

“He drove it in, and he gave it to our big man,” the Crownpoint coach said of Tsosie.

The Eagles faced an early 8-2 deficit, but a three-point shot from junior Taye Harvey (14 points) started a quarter ending 9-3 run.

Harvey added a two-point basket before Archie scored the last four as both teams entered the second quarter tied at 11-all.

After missing its initial three shots, the Eagles made 5-of-6 to build a 23-19 cushion following Kordell McMillian’s 3-pointer with 2:08 left to go until the half.

Hot Springs got two free throws from junior Victor Munoz to end the break with the Eagles leading 23-21.

At the start of the second half, Crownpoint’s defensive pressure helped the Eagles open a 31-21 cushion behind a pair of steals.

McMillian, who finished with 12, scored five straight and Harvey added a 3-pointer to cap an 8-0 run with 6:10 left in the third.

Bean said his team came out of the half a little flat, but they answered the call as they cut the Eagles lead down to 39-32 at the end of the third.

After trailing 43-36, the Tigers scored six straight to make it a one-possession ballgame with 3:22 left.

“We came back and got back in the game, but Crownpoint is just tough,” Bean said. “They’re gonna be a tough team to follow down the road.”

The championship win was Crownpoint’s first title at the Wingate tournament and they hope this is a start of something good.

“It’s been years since Crownpoint has had a good team,” Goodluck said while adding that the core players have been together since they were in elementary school.

“My boys are well-balanced,” he said. “And they’re above average size, so we got some size advantage.”

“I feel like we can do well at state,” he added.