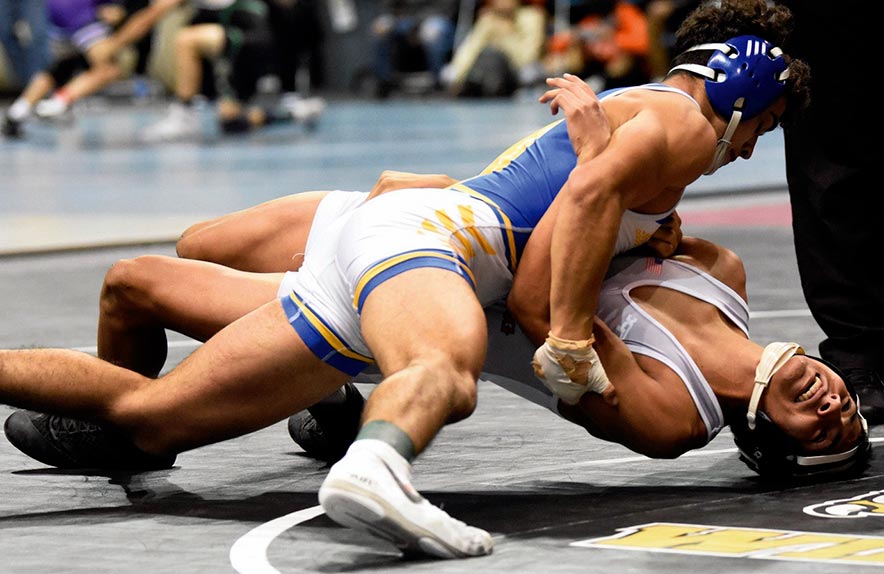 Even with a yearlong pause the Monument Valley wrestling program is looking to have a marvelous season.

MV coach Clyde McBride said he’s excited about the talent he has despite not having a season last year due to the pandemic.

“I got a good group of sophomores,” he said. “They didn’t get the 50 matches they would have gotten as freshmen but we’re going to get after it.”

With good attitudes, McBride said his team is improving each week.

“We’re trying to play catch-up, but I have a really talented team,” he said. “We just got to get them some more mat time.”

The girls, meanwhile, took 11th with 132 points in the 23-team tournament.

“I think our outlook is looking positive,” McBride said.

The Mustang boys had six wrestlers earn medals at the Window Rock event headed by the second- and third-place finish from sophomore Joseph Rodriquez (126) and junior Cauy Betoney (120), respectively.

Rodriquez lost his championship bout to Bloomfield’s Adan Benavidez in a fall while Betoney pinned Gabriel Horton of Bloomfield in his third-place match.

McBride said Betoney and Rodriquez are two wrestlers to look out for. In addition, he’s looking forward to the progress of Matthew Curley, who placed ninth at 113 on Saturday.

“He’s going to drop to 106 and I think he’s going to be dominating,” McBride said of junior wrestler.

The MV coach was also enthusiastic about Jennifer Alcott as the senior pinned Miyamura’s Amber Gutierrez in the opening period for the 100-pound title.

At 145, senior Lorilee Begay took ninth, losing her first match of the season to Aztec’s Princess Altisi, the eventual champion, in the opening round.

“She was a state placer and she looked really tough,” McBride said of Begay. “She just happened to hit a New Mexico state champion here. And once again, getting that one year behind hurts.”

With the talent he has, McBride said he’s looking to get 10 boys and five girls to state.

Looking at the 3A North, the MV coach said all the teams are solid.

“Page, Tuba and Chinle are looking alright,” he said. “Ganado has some good ones too. Wrestling has improved in the 3A North.”