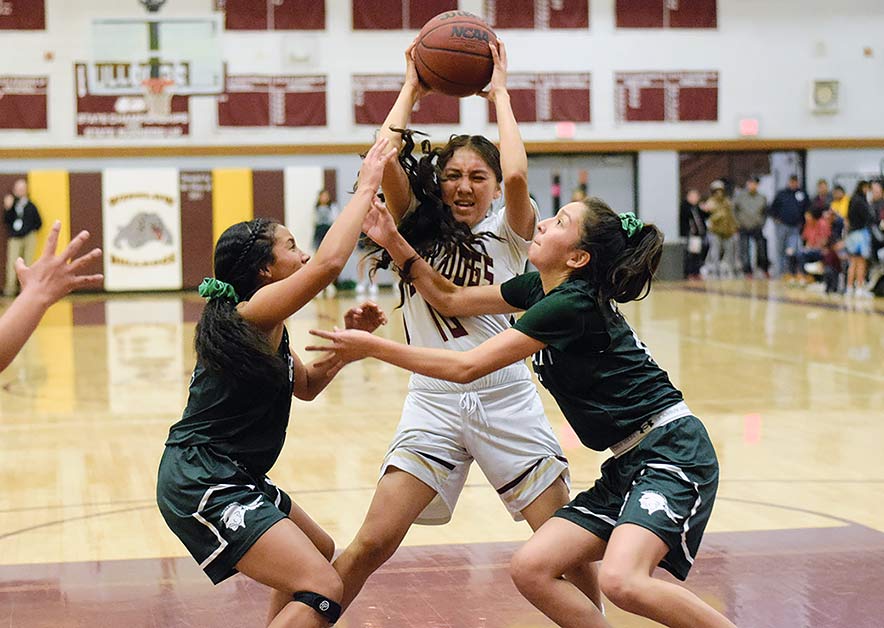 For state powering ranking purposes, the Winslow girls’ basketball team needed this one.

The Lady Bulldogs turned back Tuba City on Thursday night with a 61-49 triumph as they split the home-to-home series with the Lady Warriors.

The Bulldogs entered Thursday night’s contest ranked No. 15 in the latest Arizona Interscholastic Association power rankings as they improved their conference record to 3-4.

Tuba City, meanwhile, dropped to 6-1 overall while holding down the No. 5 spot in the statewide polls. According to the AIA, the rankings will be updated later today.

“We knew that we needed to split with them and get the ‘W,’” Winslow senior forward Andrea Willeto said. “We had to stick together and we had to trust each other.”

The Bulldogs used a massive 18 to 2 run that spanned two quarters to go up 41-25 on a basket by senior forward Taylor Butterfield with 3:39 left in the third stanza.

That 16-point cushion was enough to withstand a couple of mini-runs by Tuba City.

“Credit coach (Kim) Williams,” Winslow coach Jerron Jordan said. “They beat us up at their place and we knew they were going to make a run at us. That is what good teams do.”

Jordan said they had mixed results from the big Chandler Prep Invitational last week as his squad went .500 in one of the elite brackets.

Willeto said she was initially shocked that they were playing good defense as they stole the momentum late in the second quarter when they ended the opening half on a 6-0 run.

That late spurt came on the heels of a Tuba City rally as the Warriors tied the contest at 23-all on an old-fashion three-point play from senior forward Jada Chee with 1:20 left in the second stanza.

Nonetheless, Winslow senior guard Brianna Little got the Bulldogs going as she hit a trey and with time running out she was fouled as her and-1 earned Winslow a 29-23 cushion at the half.

The Bulldogs carried that momentum into the third stanza as five different players gave the home fans a lot to cheer about when they went up 41-25.

“At halftime coach Jordan talked to us about how good teams can make a run so we needed to keep our foot on the gas pedal,” Willeto said of their focus after the break. “We knew that we had to play good defense and keep them away from the basket.”

The Bulldogs had four players in double figures headed by the 16 points turned in by Willeto. Junior guard Kristin Wagner and sophomore guard Kylie Begay chipped in 13 each while Little added 10.

Tuba City will travel to Window Rock on Saturday for its next contest in an important 3A North Region game.

Winslow will host 4A Canyon View tonight in a freedom game.