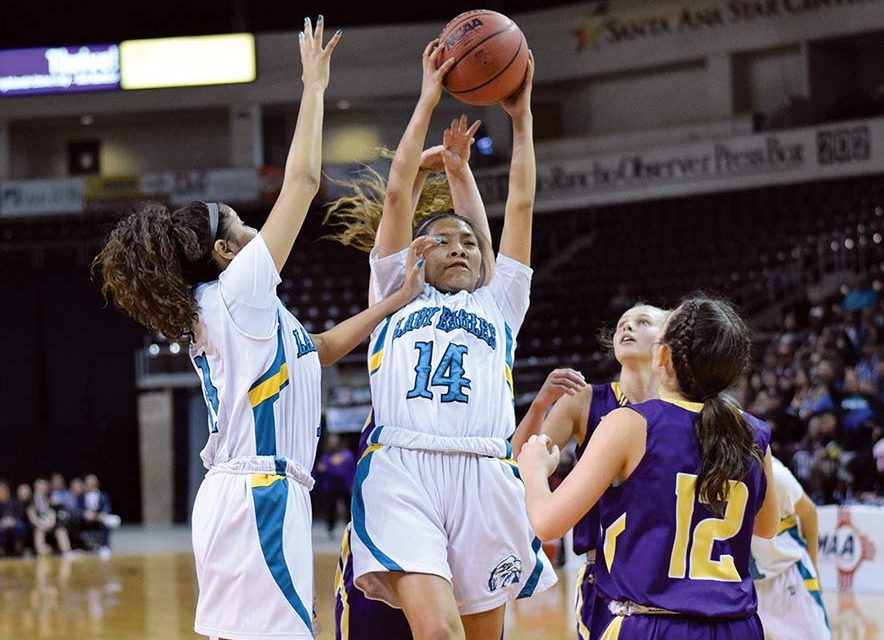 In the wake of the New Mexico Activities Association’s decision to ban fans for the duration of the state hoops tournament due to the CORVID-19 scare, the Navajo Prep girls’ basketball team played its semifinal game in almost complete silence on Thursday morning.

The top-seeded Lady Eagles (27-2) turned it up a notch in the second half to put away No. 4 West Las Vegas Lady Dons by a 59-31 count at the Santa Ana Star Center.

Navajo Prep coach Rainy Crisp said it was weird to see the Rio Rancho venue empty, especially with it being late in the state tournament.

“The feeling and atmosphere wasn’t the same because the fans are the ones that add to the game,” she said. “It’s definitely an adjustment that we had to make before the game and it’s going to be an adjustment for all of the teams that are left.”

Like most of the coaches that have talked to the Navajo Times, Crisp said it was unfortunate to not have their fan support. 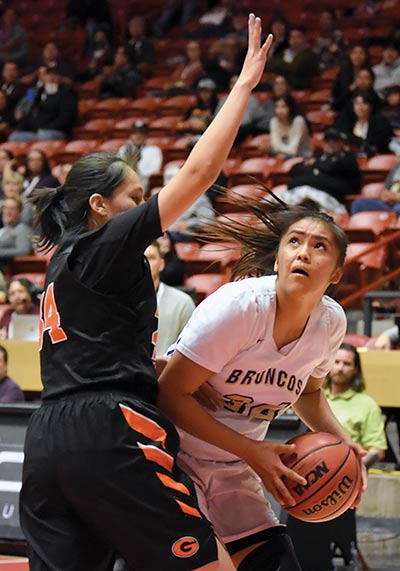 Navajo Times | Ravonelle Yazzie
Kirtland Central’s Candace Patterson looks to make a basket over Gallup’s Jordan Joe on Tuesday night during the quarterfinal game at the Dreamstyle Arena in Albuquerque.

“When you come to state it’s the best feeling to hear your fans cheering for you,” she said. “At first the girls were really disappointed that their families weren’t going to be able to watch but at the same time I was real happy for them wanting to play for their families.

“Since they can’t be there they were saying ‘Let’s do it for them,’” she added. “That just made us feel a lot better and although they weren’t there at the gym they still were supporting us.”

At the half Prep led 22-21 but after the break the Eagles gained some distance with a 20-point effort in the third.

Defensively, they held the Dons to only two points as they led 42-23 going into the fourth.

Like Tuesday’s quarterfinal game, the Navajo Prep coach said the Dons had a guard who had little trouble breaking down her team’s defense.

“She was eating us up in the first half,” Crisp said of West Las Vegas Briana Marquez. “She was creating for herself and her teammates so we had to make some adjustments in the second half in containing her.

“She’s such a good athlete that we knew she was going to get her points but in the second half we pulled back with our press and we just focused on containing her with our half-court defense,” she said.

Offensively, Crisp said it was hard for her team to get into a rhythm in those first 16 minutes but after the break their defense took over.

“We started to turn them over and we were pushing the ball a lot more,” she said. “All the girls were running the floor and we were able to get easy baskets in transition.”

Navajo Prep will play the winner between Thursday’s late game between No. 2 Tularosa and No. 3 Tohatchi in the 3A championship game on Friday. Tipoff is scheduled for 3 p.m. at Dreamstyle Arena on the University of New Mexico campus.

“We know that whoever we play tomorrow is going to be a tough game,” Crisp said. “We’re excited to be in the finals but we’re not done yet. We have one more game left and our goal is to go undefeated in this part of our season.”