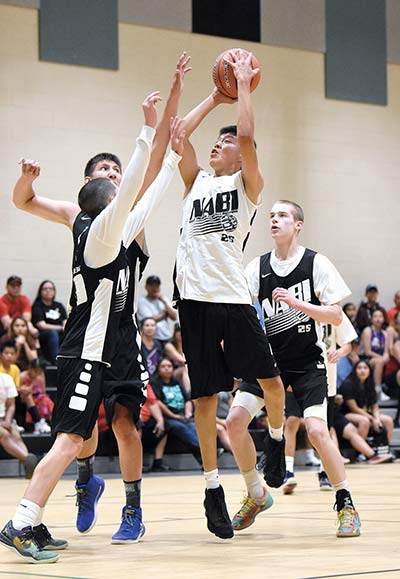 Isaac Salabiye (25) attempts to shoot the ball over two Rainshakers on Monday at the Native American Basketball Invitational.

The Navajo Nation-based team wants to feast on those 1-on-2 and 2-on-3 opportunities to get by teams.

Northern Elite coach Rick Destea believes that formula will get them to the championship game of the Gold Bracket at the 17th Annual Native American Basketball Invitational.

“We want to get those easy transition baskets,” he said. “We try to work on that a lot.”

With a talented team, Destea said they have high expectations for this year’s tournament as his 2012 team finished as the reserve champion behind Cheyenne Araphaho.

“Before the start of this we set out an agenda,” Destea said. “I told the boys, the parents and our fans that our goal is to be playing in that championship game on Saturday.”

Since March, Destea said his team has traveled extensively, playing in non-Native tournaments as far as Oklahoma and California.

“We’re pretty competitive,” he said. “We’re strong and we can compete with a lot of those teams. I feel like the boys are playing confident.”