The 17-year-old Navajo Prep point guard was putting clips together in hopes of earning a basketball scholarship.

One night she stayed up until 6 o’clock the next morning to make sure her highlight reel included all the necessary information to help in her recruiting process.

“She had been working on that,” her mom, Lillie Charley said. 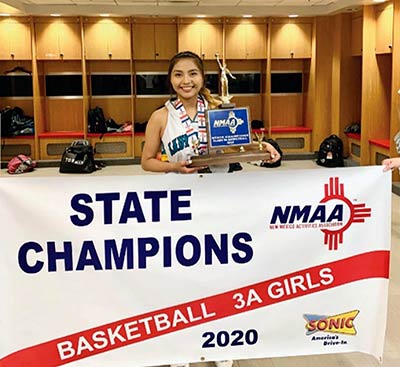 Submitted
Laila Charley proudly displays the state championship trophy the Navajo Prep Lady Eagles won this past season. Charley is recovering at the University of New Mexico Children’s Hospital after being involved in an ATV accident near her home in Shiprock.

Not long after that, Laila was fighting for her life as she was involved in a horrific all-terrain vehicle accident near her home in Shiprock on July 15.

The accident happened late that evening with her parents, Micheal and Lillie, still at work.

“As parents we tell our kids to be careful over and over but sometimes kids think that nothing bad will happen to them,” Lillie said with her voice cracking. “I’m pretty sure that’s what my daughter thought. We told her to be careful but she would always tell us ‘I know, I know.’”

“She accomplished way more than I what I did in high school,” Michael said. “I played for Newcomb (High) and I thought I did a lot on my high school team but she went far beyond what I’ve done.”

Michael said his daughter put in a lot of work during the summer, getting ready for her senior season.

“She was making herself stronger and better,” he said. “That was what she was focused on. When I would go out to the track to hit my golf balls she was out there running or doing all kinds of exercises to get faster. She did that all summer long.”

From what she’s gathered, Lillie said her daughter was driving around a corner with her little brother, Miles, sitting directly behind her with neither rider wearing a helmet in an area covered with gravel.

And when they hit that corner, Laila flew off the ATV while Miles, 9, managed to stay on as he held onto the railings behind him, while spraining his thumb.

As for Laila, she hit the ground pretty hard and after being transported to Northern Navajo Medical Center she was immediately flown to the University of New Mexico Children’s Hospital in Albuquerque.

“Honestly, when I first heard what happened my first thought was she’s going to be OK,” Lilly said. “But when the doctors told us her injuries were pretty serious and that she might not make it – it turned my world upside down.”

The impact of the crash fractured Laila’s temporal and occipital bones on the right side of her head. As a result she suffered a subdural hematoma, epidural hematoma and a traumatic brain injury as the doctors at UNM performed emergency surgery to stop the bleeding.

With the extent of her daughter’s injuries, Lillie reached out to her friends and family asking for prayers.

“She had a lot of swelling in her brain so I went to Facebook and I asked everyone to pray for her,” the Charley matriarch said while trying to hold back tears. “Everyone was asking what we needed and I just told them to pray.

“I truly believe that is what gave my daughter the strength to get through this,” she said, “especially the first couple of days after her surgery.”

Michael said the outpouring of support was overwhelming.

“It was really good to hear them reaching out to us,” he said. “Personally, it really touched me. It helped me pull through the first week when I was crying nonstop, not knowing what was going to happen to my daughter. It’s hard to put into words on how much support we got from everybody.”

In her daughter’s initial surgery, Lillie said they placed an EVD (external ventricle drain) as a way to reduce the pressure in her brain.

According to Wikipedia, EVD is a device used to “relieve elevated intracranial pressure when the normal flow of cerebrospinal final (CSF) is obstructed” and it’s used as a short-term solution to treat hydrocephalus, a condition in which fluid accumulates in the brain.

The purpose of the device, the website says, “Is to divert fluid from the ventricles of the brain and allow for monitoring of intracranial pressure.”

Lillie said Laila is expected to undergo a few more surgeries along with rehab in the coming days and weeks.

Since her hospitalization, Lillie said her daughter is showing some improvement. She said Laila is able to open her eyes and “she’s moving her legs a lot.”

“I feel like she wants to get out of bed,” the Charley matriarch said, while noting that last week she asked Laila to squeeze her hand and she was able to do that.

Lillie said there was more good news to report as Laila sat up for six minutes with some assistance.

“That’s the first time she’s sat up like that for over two weeks,” Lillie said of her daughter, who is still in the ICU unit at UNM. “Her neurosurgeon is real surprised with her progress and he said she’s doing better than expected.”

The family is seeking donations to offset “future unforeseen medical expenses, trips back & forth, household bills and daily expenses.”

Currently, the Charley’s older daughter, Mikayla, is taking care of her younger brother at home.

And although he’s received donations from his coworkers and upper management from NECA, Lillie said her husband does not earn benefits such as paid time off or vacation hours.

“They have been very supportive during this difficulty time for our family,” Lillie said of her husband’s truck driving job at NECA. “His coworkers have donated money without us asking. The general manager and the higher ups have donated money too and we’re very thankful for that.”

Lillie, meanwhile, works as a licensed practical nurse at a rehab center in Bloomfield but she’s not eligible for benefits since she’s been at her current job for less than a year.

“We’ve been told her recovery is going to take weeks, maybe months,” Lillie said. “We just don’t know the exact numbers. I plan on continuing to be here with her until she goes home.”

Michael said he appreciates all the support they are receiving and he wants people to continue to pray for his daughter.

“I like to tell the Diné people to continue to pray for her,” he said. “I want them to continue to keep her in your thoughts because she needs all the encouragement for a full recovery.”