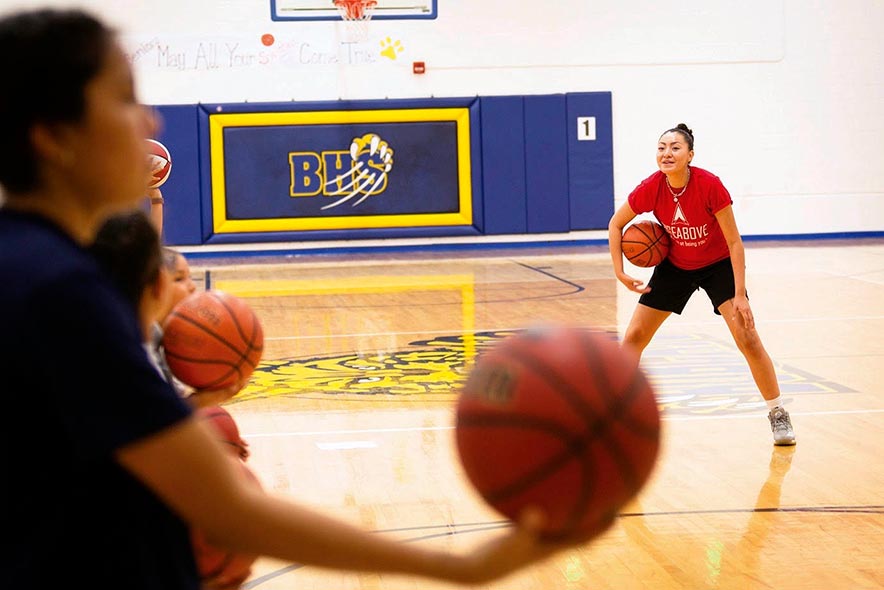 Benally played collegiately for San Jose State from 2016 to 2021, with her senior season being cut short after four games because of the global pandemic.

She recently played internationally with CSM Alexandria in Romania.

Rise Above co-founder Jaci McCormack said she is pleased to have Benally as a partner.

“We’re so thrilled to have her,” McCormack said in an interview on Monday. “You know, she just finished her first year of professional basketball, and with her being a new partner of Rise Above we just thought it was a perfect fit. And what a cool opportunity for Analyss.” 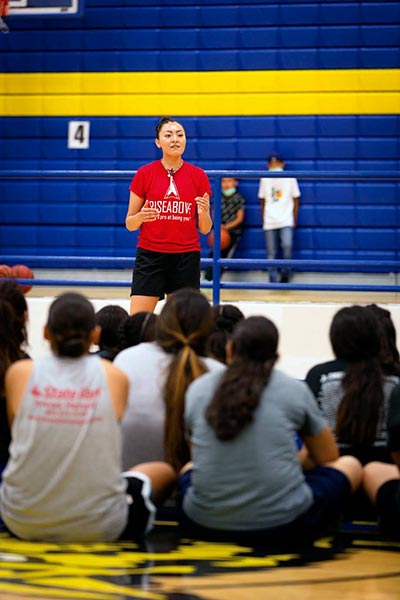 McCormack, who grew up on the Nez Pierce reservation and played collegiately at Illinois State, started the nonprofit with Brad Meyers, a former Division I basketball player.

McCormack said the foundation was created as a way to inspire Native youths. She said the nonprofit seeks to improve their lives through education, opportunity, and sports.

“Growing up, I really didn’t have that person to look up to and emulate who was playing Division I basketball and doing the things I wanted,” McCormack said. “So after I left Illinois State, I started this foundation as a way for me to give back and hopefully impact a generation of kids through Rise Above.

“It’s creating mentorship opportunities for athletes pursuing their dreams and giving back,” she said. “I think it shows kids that if I can make it – you can make it too.”

McCormack said Rise Above was started seven years ago, and so far, they’ve served over 5,000 kids, mainly in the Pacific Northwest.

“We’ve kind of grown exponentially every year,” she said. “We’re probably one of the only mobile nonprofits out there. We’ve stayed in this area, and it’s to protect the brand of Rise Above.

“We’ve secured some really cool partnerships the last couple of years that have really helped us serve more kids,” she said.

Meyers said Rise Above is built on a three-prong system.

“The first one is direct service, which Analyss had a chance to come and see us work directly with the kids,” he said.

Secondly, Meyers said they’re working with the Kalispel and Nisqually tribes in the Pacific Northwest, and through their partnerships, they’re going to build Rise Above centers.

“They’re multi-sport facilities that will allow Rise Above to have a brick and mortar probably the next two to three years,” he said. “Not only are we going to serve the local Native youth, but bring in kids from all over the country to come to our facilities.”

The third piece involves an upcoming feature film on McCormack’s life story, highlighting her journey as a Division I player. According to Meyers, the film’s production will be handled by Danny Glover.

“Jaci’s so humble about this, and it’s going to be a story of resiliency,” he said. “We got some amazing partners associated with this project, and with the film, she’s going to have a bigger platform to reach more kids.

“That’s the goal of the film, and having people like Danny Glover and NBA coach Lenny Wilkens and NFL wide receiver Doug Baldwin jumped to say her story needs to be told is a pretty cool thing.”

Meyers said they have used sports to reach their audience, and he’s stressed that all of their events are free.

“We won’t charge anything,” he said. “We never will, and that’s our core philosophy.”

Currently, they have kids participating in their programs with football, baseball, basketball, and hockey.

“Sport is one modality, music is another modality,” Meyers said while adding that they have partnered with rock band Portugal. The Man.

“Their foundation is 100% committed to giving back to Indigenous communities, so they’re our core partners,” he said.

Meyers said Rise Above started out with basketball with the help of Gary Payton, but the nonprofit also understands that not all kids play basketball.

“So the real intent of Rise Above is to get the kids early in life, address any kind of behavioral health issues that we can,” he said. “We partnered with behavioral health components in the community, and we really ask them how can we serve you?

“We also conduct surveys in all of our clinics,” he said. “Our surveys are blind surveys, and we work with the Harvard School of Medicine, which helped us develop it.”

With those surveys, Meyers said the foundation provides feedback to counsel members, behavioral health teams, coaches, and mentors to help them identify trends they see within their communities.

As for future goals, Meyers is hoping Rise Above will become a national program.

“Obviously, we’d love to come down to the Navajo Nation and serve kids down there with Annalyss,” he said.

Benally said being apart of the Rise Above family has been a great experience.

“It’s a way for me giving back,” she said. “It’s really expanding me on what I’m doing now, and the people that I’m around. I really appreciate them reaching out to me.”

The Champions of Change is a nonprofit group headed by former players from the Seattle Seahawks. The founding members include Michael Bennett, Cliff Avril and Doug Baldwin.

McCormack said the group is doing work in underserved communities and they support nonprofits and businesses in those areas.

“Those three young men are really invested in giving back to their communities,” she said. “We’re fortunate to be able to have representation with our Native community with Analyss participating.”

Meyers concurred, while adding that Rise Above is very blessed to have Benally involved.

“It’s a great opportunity for her,” he said. “There is going to be a lot of high profile people there. We’re going to have Jamal Crawford, Isaiah Thomas, and Sue Bird is going to be one of the celebrity coaches. The people from the Seattle Storm will be there and she’ll be able to interact with them.

“It’s also good for the tribal youth to come out and see her do her thing,” he added.