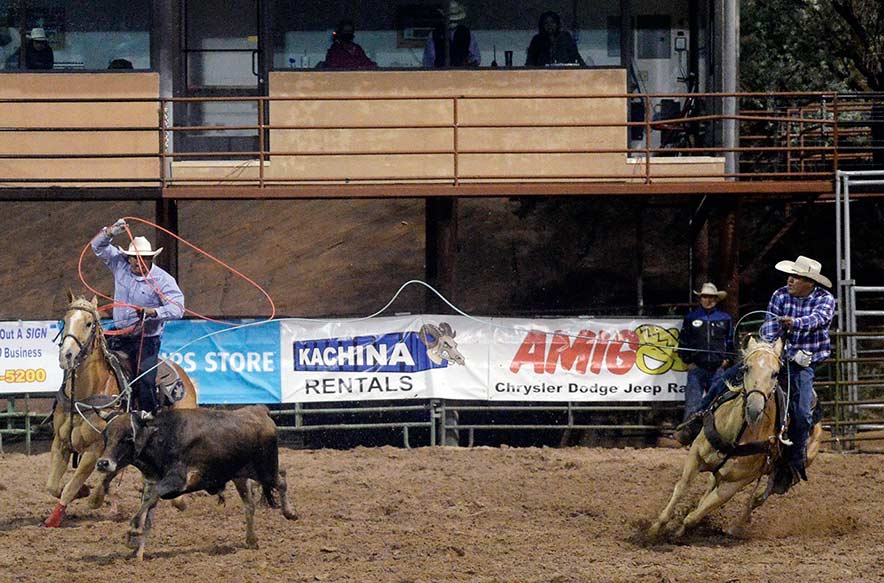 Getting two checks for one run paid handsomely for team ropers Bill Dahozy and Doyle Lee.

Going into their run on Friday night at the 72nd Annual Gallup Lions Club Open Rodeo, the two cowboys knew it was possible to double-dip in both the incentive and open team roping.

The pair won the incentive with a routine run of 7.07 seconds and pocketed $820 each. That same run was enough to earn them the second paycheck of $263 each, as they turned in the sixth-fastest time at the two-day rodeo at Red Rock Park.

“We thought about it going in,” Dahozy said of double-dipping. “We knew it was possible because they do it every year.”

Dahozy, the team’s header, said he made sure that he hit the barrier right to set up their run.

“I got out good at the barrier, and I got that steer turned as quick as I can,” the Window Rock cowboy said. “These steers were kind of heavy, so I’m glad Doyle did his job.”

Admittedly, Lee was feeling doubtful about getting two checks.

“I didn’t think we would place in the open, but it fell into place, and it opened up for us,” said Lee, who hails from Rock Point, Arizona.

Dahozy, categorized as a 6.5 roper in the team roping numbered handicapped system, said he’s placed at the Lions Club Rodeo before, but it was a while back.

“I headed for Carlos Bustamante,” he said. “I was a young kid at the time.”

Lee, a 6.0 roper, said this was his first time winning at the annual event. He had a chance to add to his cache, but he posted a no time with roping partner JR Becenti.

“I missed a good one to place again,” he said.

The pair finished behind five other teams, with John Bahe and Corey Yazzie winning the open with a 5.96 effort. The winning team made that run during Saturday morning’s slack performance, which paid them $1,420 each.