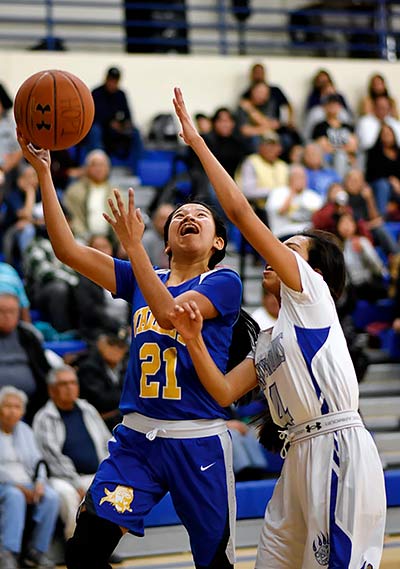 Despite losing four seniors off last year’s team, the Valley girls’ basketball team continues to be part of the conversation.

For the past six years, the Lady Pirates have sustained a long and steady trajectory as one of Arizona’s most prominent programs. In that span, Valley has played in four state championship games, winning it all in back-to-back seasons in 2016 and 2017.

Last year the Pirates saw their fifth possible trip to the finals come to an abrupt end when No. 11 seed Thatcher scored the game’s final four points to steal a 51-50 win in the quarterfinals of the 2A girls bracket.

“I think that loss was real heavy on them,” Valley coach Dorothy Mitchell said following her team’s 65-36 win over Hopi. “We don’t lose very often but this season we’ve lost a number of games.

“I think from those losses they’re improving every game,” she said. “We’re fixing a lot of mistakes that we see on the court and we’re just building off those losses.”

And while that loss to Thatcher was hard to swallow, Mitchell said her team has a different perspective when it comes to losses as Valley enters today’s conference game against Round Valley with an 11-6 mark and 8-1 in 2A North play.

“We’re able to take those losses humbly,” she said. “It’s great to see them having fun even though we’ve lost some games.

“We played in the Chandler Prep tournament over the break and we lost some games out there,” she said. “We only won one game and most of the teams we played were 5A teams. Those teams played aggressively and because of it the girls are getting tough.”

Valley senior Valiyah Yazzie said they are fighting to get back to that state title game as she was part of the state championship team her freshman and sophomore year. In retrospect, she said losing to Thatcher was a heartbreaker, especially for last year’s senior class.

“I felt really bad for them,” she said. “As a junior (last season) I knew I had one more year to do it. I felt really bummed for them but I think it’s made us stronger. We want to get back to that point again and win it all.