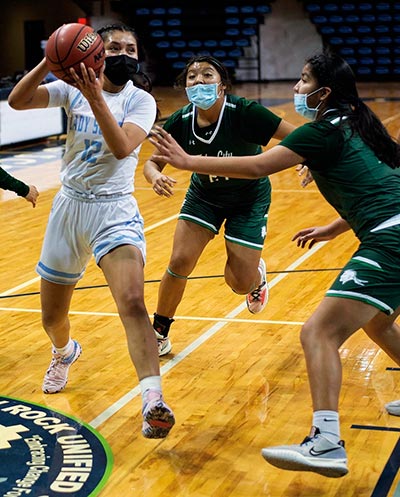 However, the center was closed to spectators, leaving the teams to play in an empty gym.

The score went back and forth for the rest of the first period.

Talkalai scored the most for the Scouts with four baskets, while Tuba’s LaShantay Poola made the most with two baskets, and Kailer Tsingine-Reid made four free throw shots.

In the second period, Tsingine-Reid made the first 3-pointer and helped Tuba tie it again at 14-14. In the final minute, the Scouts scored two basket for a 27-22 lead.

Tsingine-Reid again led the score for Tuba City with five points, while Talkalai led Window Rock with 11 points. She also made the Scouts’ first 3-pointer.

After halftime, Window Rock rallied and started making gains against Tuba City. It increased its offense and kept the ball out of Tuba’s hand.

Talkalai worked overtime as she made three baskets and another 3-pointer. Tsingine-Reid made a 3-pointer as well and two free throws. At the end of the period, the score was 45-29 for the Scouts.

Tuba City rushed to make points in the final quarter, but Window Rock continued to push forward. Talkalai led the Scouts to the end with eight points, while collectively, her team made 20 points in the period ­– the most in the game.

Tsingine-Reid led with six points for the Lady Warriors.

The final points were made by Talkalai, who made two free throws, ending the game 65-39 for Window Rock.

Lady Scouts head coach Gabrielle Whitney said it was a good game, and her team just needs to communicate more.

“We kind of had a slow start,” Whitney said. “But after halftime, they picked it up.

“We’re looking pretty good; I believe we’re second in our conference, but we can’t let that get to us,” she said. “We still got a lot of playing ahead of us.

“We can’t be comfortable where we’re at,” she said. “We got to keep looking forward.”

She also thanks Tuba City for participating and playing. 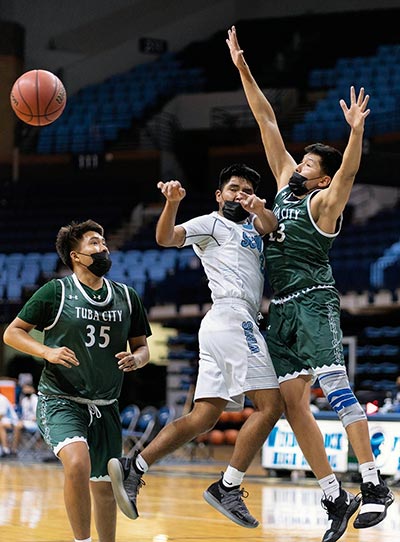 The boys started with Warrior Tyler Williams making the first basket with a 3-pointer before quickly taking off with the lead. Window Rock lacked manpower that night, and Tuba used that to its advantage.

Tuba held the ball in the second quarter and wouldn’t let go. Window Rock suffered a dry spell of baskets for the first few minutes as Tuba City continued its assault.

The Scouts started to gain some ground toward the end of the period, with Begaye making stunning gains in the final two minutes. He made two 3-pointer shots, followed up by his teammate Kyle Weaver who made a 3-pointer with 10 seconds to spare.

Begaye led with 11 points for the Scouts, while Arizona led Tuba City with nine points. Despite Window Rock’s resurgence, Tuba still led with 35-23.

After halftime, Williams restarted the game with another 3-pointer, and Tuba City continued its barrage. The Warriors scored the most in this quarter. Arizona led with four baskets, and Williams followed with two 3-pointers. Window Rock tried to keep up with Begaye making seven points. The third period ended 57-34 for Tuba City.

In the final quarter, Tuba City again started the period with a 3-pointer – this time from Papsiya Lomayestewa.

As the Warriors continued to score, the clock started to run halfway through the period. Window Rock made some last-minute baskets, but the game ended with Trent Engle making the last shot right before the buzzer.

For this quarter, Lomayestewa led with two 3-pointers, followed by teammate Desean Butler with a basket and two free throw shots.

Widow Rock’s Kanaan Marianito led with four points, followed by Owen Mitchell, who made a 3-pointer, and Kiyaani Harvey, who made a basket and a free throw. Tuba City pulled out a win with 78-48, maintaining its No.1 standing for the 3A North.

Although it was a rough game, Scouts coach Murray Shirley is hopeful that the team will improve and be ready when it faces Tuba City.

Shirley said his team is missing many players, and once his student-athletes return, they will do better. For this game, they were short on players and had to pull in some members from JV.

“I think we’re doing good,” Shirley said when asked about the season. “We just got to pick up these last regional games, and I think we’ll come up on top, we’re going to give it a lot of effort and keep being resilient.”

He commends his team for doing its best and highlights Begaye’s efforts to be an all-around player. Shirley said he’s proud of Begaye’s performance on the court.

Tuba City’s first-year coach Justin Smith said he is always happy when he can pull a win against Window Rock. Smith was the former boys’ basketball coach for Page High, where he led the Sand Devils to its 2020 championship win, and Smith also served as the PHS girls’ basketball coach.

Although it was a victory, Smith saw some things he wanted to improve, such as defense and working with the entire team. Smith was missing some players that night.

Smith commends Arizona for getting gaps and finding open men to pass to, for Williams’s 3-pointers and Butler’s performance.

“We still got a (way) to go, but we’re getting there,” Smith said. “I’m pleasantly surprised with how we play even though I don’t think we played as good as we can because we haven’t played a game since last Thursday.

“But if we can keep them all here, keep them healthy and away from the COVID stuff, I feel like we’ll be where we need to be in February,” Smith added.