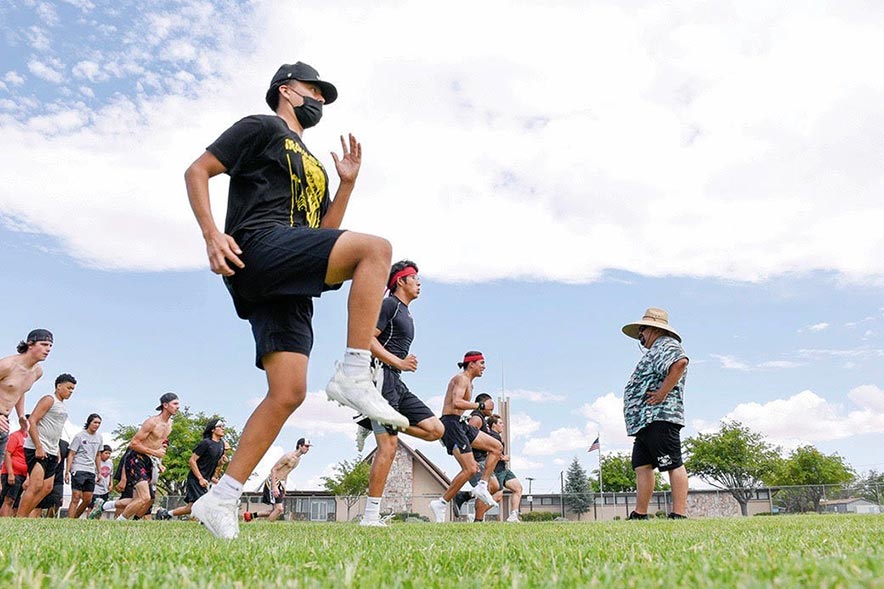 As summer fades away, the Page High Sand Devils football team is ready to return to the field and play after a yearlong hiatus because of the coronavirus pandemic.

Head football coach Leland “Bubba” Billie said he and his student-athletes are looking forward to the start of the season in August.

“The boys were just waiting, like, ‘When do we get that green light?’” Billie said. “We had a bunch of kids in the weight room on day one, it was pretty cool to see that they were anxious to get started.”

The team initially started training in March, not long after which Page High started a hybrid-learning program that gave students the option of in-person teaching or taking online classes from home. It wasn’t until the summer did the team begun practicing in earnest.

Billie said it might be a challenge as he is working with mostly a new varsity team comprising of underclassmen that know what is expected of them.

“There’s going to be some transition time,” he said. “It took us a while in the weight room to get back into the swing of things because a lot of the boys haven’t done anything for 12 months or more.

“We’re trying to be proactive in that area, trying to prepare our kids as best as possible but there’s just definitely going to be a transitions.”

The Sand Devils football players this week will be going to team camp and by its end Billie will know the team’s strength. He is focusing on building team cohesion and getting the boys in shape. As of now he says that the team is good while having some room for improvement.

Billie believes that the students needed sports, not just as something to keep them fit or entertained, but also as an activity that will help them grow as individuals.

Having the students back in schools with friends and interacting in-person instead of through email is good, said Billie. When members of the team on Monday came onto the field they had a “pep in their step” and an infectious excitement that made Billie just as eager to return to coaching.

“Yes we want to win games, yes we want to win championships and that is our number one priority but along the way we want to build these kids to become full members of society and I think football plays a roll in that,” Billie said. “They work on their communications skills, responsibility, all those factors that can carry over into the real world.”

The pandemic has raised some challenges but they were able to work around it. They take proper safety measures even as regulations have loosened in recent days and infection numbers have been low in the Page-Lake Powell area, said Billie.

Billie said he has received nothing but support from the community and from the families of his players. Not having sports seemed to affect the community as a whole and he is certain that when the team has its first home game in August people will be out to support them.

As of now, Billie is unaware of any regulations that prohibit spectators in the stands.

With a new varsity team, Billie is confident that they will put on a good season, especially with some experienced sophomores and juniors stepping up to help lead.

Billie said the team is aiming for gold this season and they hope to make it to the championships.

Regardless, he is proud of how far they have come considering the hardships of the previous year.

“They work extremely hard,” Billie said. “Its been fun watching them develop both on the field and in the weight room, I’m just excited to see them put the full pads on and see what we can do.”