‘We never asked for this’: Student-athletes leaving rez to play sports in border towns

During a football meeting at St. Johns High School, the team seniors were allowed to stand and say a few words as they reached their season’s halfway point. One of their newest varsity additions who stood up was Karl Bigman. 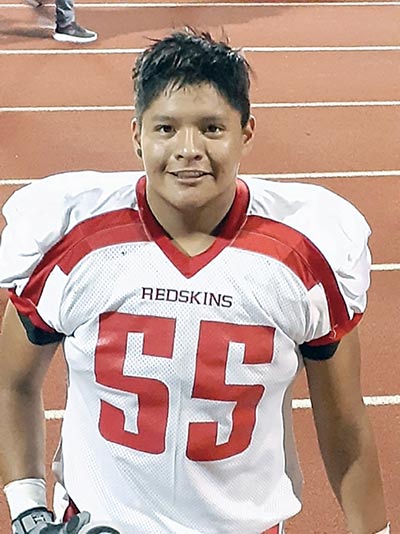 “I told them, ‘I sacrificed everything to be on this field to play with you guys and to play day-in and day-out with you guys,’” Bigman said. “‘I spent more time on the field with (you) than I did with my family. Sometimes I don’t even go back on the weekends … to Red Mesa. I stay up in Sanders, or my parents have to pick me up on certain weekends.’”

Bigman said he also reported that sometimes he would stay the night at a teammate’s house.

Bigman had been going to school at Red Mesa ever since he was young. He’s been playing football since his freshman year and also wrestled during the winter. However, that changed when the COVID-19 pandemic hit, and the Navajo Nation went into lockdown.

“It was difficult for me because I normally did off-season training where I did weight-lifting with my football coaches, but I wasn’t able to do that because of the quarantine, and I lost a bunch of weight from being in quarantine. It’s hard to get out and go to the gym and get stronger,” Bigman said. “That was one of the dilemmas I faced going into the season as well as not knowing whether I’m having a football season or not.”

Even when schools began to reopen, few if any schools were hosting sports, which was a real blow to Karl. It was his last year of high school, and he wanted to play.

“I knew I had to make a decision fast to at least have a chance to touch that field again,” Bigman said. “And I always looked at St. Johns and said, ‘You know, they really have a good football program,’ and considering my grandma lived in Sanders, which made everything fall into place when I decided.”

He talked to his parents, Herbert and Helen Bigman, and they agreed to transfer him to St. Johns.

Herman and Helen are supportive of their children. Almost all of their kids have been in sports at one point or another. Their eldest son also played football and went to state twice, and did wrestling as well. His daughter played volleyball for Sherman High School at Riverside, California.

Making the decision to transfer to St. Johns wasn’t easy, but Herbert was proud of his son for pursuing his love for the game.

“I’m just kind of in the supporting role right now, and I’m pleased with that decision too where he can enjoy the passion of football and excel in that sport,” Herman said.

After they got the paperwork done and made the transfer, it was August and the football team had been practicing for two weeks. That first day Karl showed up in regular clothes, a hat, and his cleats, but he told the coach he was ready to go if he got some shortcuts. So, the coach gave him some shorts and, on that day, he started training.

“You have to earn your position,” explained Bigman. “You’re not guaranteed a position on the team if you showed up at practice. You got to work for it, work towards it, and those other upperclassmen and seniors were in the same place I wanted to be, and I had to up my game to reach the requirement the coach wanted me to be at.”

He plays right guard when on offense and when on defense he plays either as right tackler or the defensive end.

One of Bigman’s most significant influences came from his old Red Mesa coach, Pita Olomua, who has been training football athletes for over two decades.

“One of the things that always struck me was that he never took the glory for himself,” Bigman said. “He let the skill and glory of the team shine through. He never wanted to coach a big school with 40 kids on the team. He always wanted the underdogs, the team that would come through and beat on other teams that were bigger than our team. He wanted to show that kids have heart and that if they loved something so much, then they’d play their heart out on that field. That’s what he’s really about.”

One of the greatest lessons Bigman learned was to be confident, not cocky. Through Olomua, Bigman learned how to play this “gladiator sport,” as Bigman described it. It’s a challenging game, and thanks to all the coaches from Red Mesa, he feels prepared and feels great love for the sport, which is why this is a challenging year for him.

“One of the things that was kind of off for me, it was a thought that was always there, was that my peers that I went to school with, from junior high going up to the high school years, I will not be able to ever graduate with my graduating class at Red Mesa and play football. That’s what I really wanted, that’s what every kid dreamed of, going out your senior year.”

It took time for him to get used to being in a new environment, in a place where there were few Navajos and the pandemic was raging. But the school took precautions, ripping out carpets, putting up tape to maintain social distance among the students, and encouraging everyone to wear masks.

“As a father, as a parent, if that’s what the school wants … I’m confident in the protocols and safety measure they had to go through for the school,” Herman said.

However, despite the precautions, COVID was still a problem. Twice, the St. John team had to reschedule their games as their opponents would drop out due to possible COVID contamination.

According to Gregory Perkins, athletics director and girls’ basketball coach for Holbrook High School, student-athletes transferring to new schools and teams is not a new phenomenon. Even before the pandemic, serious young athletes were leaving their home towns to join a better team where they felt they would have more exposure to college recruiters.

“It’ll change the dynamic for sure,” Perkins said, “because any time you have a transfer coming in, whether it’s a normal situation or the situation we’re in now, (it) all depends on how they fit into your system.”

Perkins said he’s received many calls lately for student transfers, but he doesn’t believe the process has been overly affected by COVID. He said any student-athletes who wish to transfer should make sure they know what they’re getting into as transfer students may have to follow different regulations when playing sports for different schools. For example, at Holbrook, a transfer student would have to sit out half the season before playing.

There are also parents asking if their children could transfer back to their original school the next year, but Perkins cautions that the current Arizona Interscholastic Association rules will prevent that student from playing for a year if they transfer back and forth.

“We always have transfers every year throughout the whole spectrum of every sport,” Perkins said. “And I think this year we will see an uptick in that in the next couple of weeks just because of the whole COVID situation and schools closing down their winter sports.”

He assures that Holbrook is taking every safety precaution against the virus. Lately, the school returned from its fall break, and students could attend school on a certain number of days or take online classes entirely. Although there is no guarantee that there will be a winter season, Holbrook is preparing to have one as long as nothing goes wrong.

Perkins understands how hard it must be for students who are looking to transfer, especially the seniors.

“For upper-class seniors, I get it,” Perkins said. “Their time is running out, and they want to play a season, and I think in most cases to better the chances of scholarship opportunity or just to get the chance to play again. I emphasize with them; I understand it’s a tough choice, and you know hopefully it’s a choice that works out for all.”

Herman, who witnessed the passion for sports in all his children, can see how many other children have the same skills as his own kids.

“I adamantly believe that sports should be on every campus out here on the reservation, and kids need to be given the opportunity to go out and excel at that sport as well as in their school curriculums,” Herman said. “It goes hand in hand. There’s just some things that rez kids can excel in. And it gives them an identity, that sense of belonging to their team. … It makes a parent really happy in that sense.”

Despite two games being canceled, there are still three games left on St. Johns’ schedule, and Bigman is determined to play them.

“The sacrifices you make to transfer is just hard, regardless of any situation,” Bigman said. “Like no matter if it’s football, baseball, basketball. If you love something, you sacrifice everything to play it one more time. I understand what these kids are going through.

“I mean, we never asked for this, COVID-19 wasn’t a thing when we were playing in our freshman year; why does it have to happen in our senior year? … If it wasn’t for football, I’d probably be doing something I shouldn’t be doing. Football is something that I love, and I want to continue doing it.”