Dion John, a cross-country assistant coach from Tohatchi High, was named the Assistant Coach of the Year by the New Mexico High School Coaches Association. 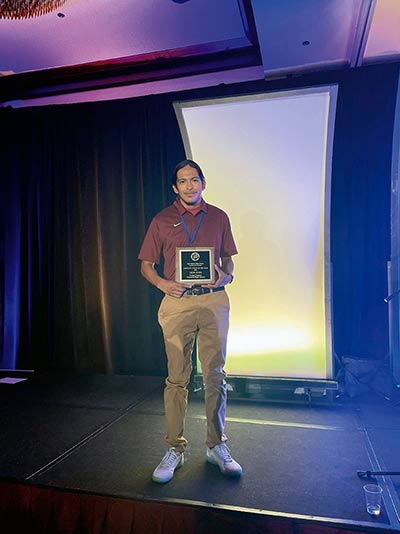 Submitted
Tohatchi’s Dion John was recently was named the Assistant Coach of the Year in cross-country by the New Mexico High School Coaches Association.

“I was very surprised when I was told I would be getting the award,” John said, “a lot of thought goes into it and I’m just happy to be awarded it and it shows that you’re just an important as the head coach if you’re the assistant coach.

“(To) other assistant coaches, just keep working hard and keep being involved in the kids lives and keep working for them and soon things will start working out for you,” he said. “It’s just amazing.”

John grew up in the Tohatchi area and would later go to school there.

Growing up he didn’t play many sports, preferring instead to skateboard.

Then in his junior year during PE class he was told to run a mile and he did it in record time. The cross-country coach heard about it and put him on the team.

Despite a late start in his running career, John would get a running scholarship and would study at Haskell Indian Nations University in Lawrence, Kansas, after graduating from high school in 2008.

He ran in collegiate cross-country for four years before graduating in 2015, saying there were some delays in college but he ultimately succeeded.

Not long afterward, he returned home and got a job as the assistant coach for cross-country at his old high school. He’s been there ever since.

“When I was in high school my coaches always told me, ‘One of you athletes will be in their shoes and be coaching, giving back to the sport that helped you changed your life’ and they started that spark,” John said.

“The high school coaches back then started that spark of coaching and I just wanted the athletes to know what’s out there and believe that someone is there for them and help them through their high school years,” he said.

John believes that running changed his life. It gave him an opportunity to go to college and to help future athletes from his hometown.

Many of his athletes listen to what he says and he believes it has to do with the fact that he was just like them a few years ago – someone who got off the rez and came back.

He added that he’s humble about the award and believes it shines a light on assistant coaches.

“The most important thing about being a coach is caring for the kids and caring for their performance,” he said. “If you care for that and them as an athlete, man you wouldn’t believe what these kids will do for you.”

John also hopes that this award will highlight the school’s cross-country program.

The past year was strenuous as the coronavirus pandemic caused most of the country to shut down. John said they had to quickly learn and adapt, especially when their team was allowed to run in the spring in 2020.

They ended up as runner-up for the Class 3A state title.

“It all goes to them for this award,” he said. “For the parents, to trust me to be the coach for their kids. It showed a lot and I can thank the school and the community for it.”