Diné returns to Western Fair from Washington to kick-box

When Mikel King saved up $1,200, he packed up his belongings in a duffel bag and told his mother he was ready to go and would pay for gasoline.

Mikel King told his mother, Doris King, he would also pay for lodging and food. Doris was shocked. 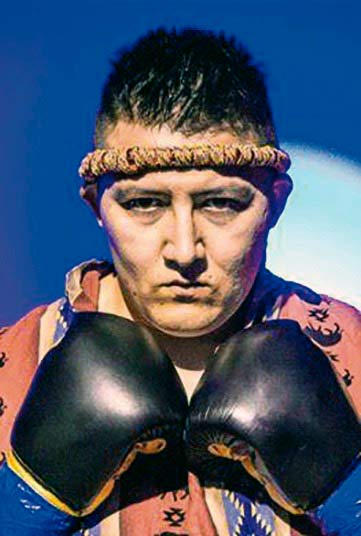 Mikel King s returning home to the Navajo Nation to fight in Ringside Promotions’ second “Rumble on the Rez” on Friday, Oct. 12, during the 50th annual Western Navajo Fair. King packed his belongings and headed to Shelton, Washington nearly four years ago to take a security job at Little Creek Casino Resort.

“Let’s do it,” Mikel told his mother.

Together with his mother and a brother, Mikel traveled over 1,300 miles and 22 hours from Tónaneesdizí to Shelton, Washington, where he had a security job interview at Little Creek Casino Resort. He was also offered accommodations by an elder of the Squaxin Island Tribe.

“(We) pulled in late one night and got hold of the tribal elder who gave me a place to stay,” Mikel said. “The next day I went to the hotel room where my mother and brother spent the night. I told them, ‘I’m set.’

“They drove me back to the place (where) I gave my mother a hug and said, ‘I probably won’t be seeing you for about a year or two, but I’ll visit,’” he said.

“‘Wherever this journey’s going to take me, this is my start.’”

Doris cried as she hugged Mikel, who was only 22 years old in December 2014 when his mother told him he needed to start his life.

“I was working four jobs back home (in Tuba City), believe it or not, to help pay my mother’s bills and to help put food on the table,” Mikel said in a telephone interview with the Navajo Times. “I was the only one in my family who could hold and keep a job. I always helped my mother with anything and everything she needed, and I still do to this day.”

His journey to Washington state started after getting off work one day when he told his mother he would be going to the gym to work out. Doris approached him and thanked him for everything he does for the family.