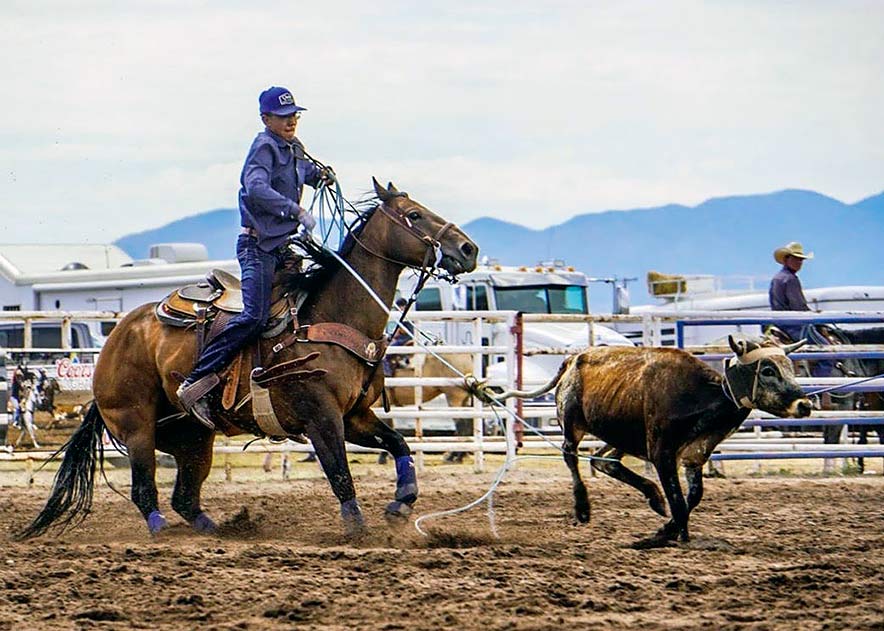 Submitted
Faron Candelaria Jr., a Diné, Isleta, San Felipe and Hispanic, is looking to earn his first qualification for nationals at the high school level.

As a three-time national qualifier at the junior high level, Faron Candelaria Jr. is looking for his first qualification in the high school ranks.

The Los Lunas Valencia High junior came up a tad short the two previous years so he’s hoping to punch his ticket with team-roping partner Calvin Taylor in the New Mexico High School Rodeo Association as the top four contestants will earn bids.

“I want to try harder this year and make nationals,” said Faron Jr., who is Diné, Isleta, San Felipe and Hispanic. “That’s my goal and I want to have a chance to win the state title.”

Faron Jr. lives on the Isleta reservation with his parents Faron Sr. and Amoretta Candelaria. His mom has roots in the Smith Lake, New Mexico, area. He’s the oldest child and he has one other sibling, younger brother Damien.

As a freshman, Faron Jr. finished fifth in the year-end standings and last year he ended up sixth in a shortened season due to the ongoing COVID-19 pandemic.

To help curb the spread of the coronavirus, the state imposed stay-at-home orders and all public events were cancelled. Because of that the spring season never got started so the NMHSRA used the 2019 fall season to determine its qualifiers for nationals.

“I missed out,” Candelaria said. “I was shooting for the spring to catch up and the pandemic happened.”

Seeing his son fall short the previous two years, Faron Sr. said his son is more determined to make it this year.

“My son has a lot of heart for this sport,” Faron Sr. said. “He really loves this sport and he’s dedicated. He gives a lot of his time to it because he wants to win a state and national title.”

During the shortened NMHSRA season, Faron Jr. roped with Gallup cowboy Landon Munoz and the elder Candelaria felt that both ropers were about to reach their peak just as the spring season was about to start.

“It was kind of tough to not see them rope with this COVID going on,” he said. “Faron Jr. was excited about where the spring season could go.”

With Munoz graduating this past May, the younger Candelaria was in search of a new heading partner.

Taylor, who hails from El Paso, Texas, was facing the same circumstances.

“We’ve known each other for two, three years but honestly we hadn’t roped together until this year,” Faron Jr. said. “He’s actually a heeler, too, and this year he’s going to head for me.”

Faron Sr. said Taylor is a No. 8 heeler, which is higher than his son under the TRIAD classification system. The purpose of the classification system, according to the United States Team Roping Championships, is to “provide ropers a handicap system, which will allow them the opportunity to compete throughout the country against those of similar skills.”

“Calvin made the choice to head for Faron Jr. because he’s seen how aggressive he is on the heeling side,” the Candelaria patriarch said. “They want to win a national title and Faron Jr. is staying aggressive.”

At the recent Landmark High School Rodeo two weeks ago in Mesquite, New Mexico, the newly formed team turned in an 8.59 in the opening round for a fifth-place finish and they added a 13-plus run in the next round.

“It was our first rodeo of the season and we did OK,” Faron Jr. said.

In their second run, the younger Candelaria said their time was a bit long but with a bevy of quality team ropers they wanted to record a time.

“We’re looking to earn as many points as we can,” he said, “so we needed a catch.”

With their sights set on winning a state title, Faron Jr. said there are plenty of pursuers as the state had three teams make the short round at the high school national finals over the summer.

“There is a lot of tough teams this year,” Faron Jr. said. “It’s going to be a dogfight and we do have some national champions.”

“It’s good to have that kind of competition,” his dad said. “It’s going to be tough but Faron Jr. is right in the mix with them. He’s ready for it.”