At INFR, winning is lovelier the second time around 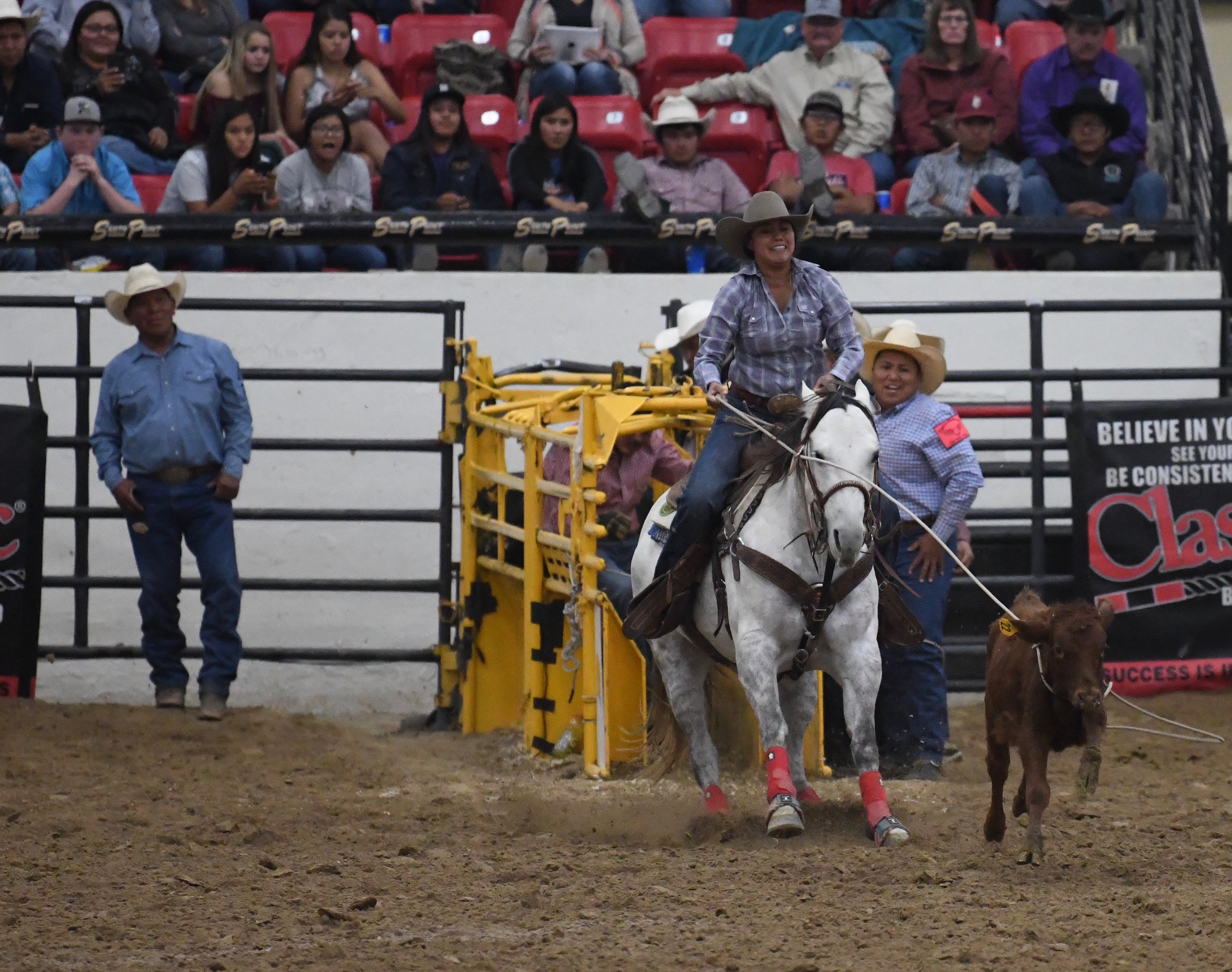 Repeat go-round winners seemed to be the underlying theme during Friday night’s performance at the Indian National Finals Rodeo.

There were five such contestants that recreated the same magic inside the South Point Equestrian Center before a large crowd in Las Vegas, Nev.

Mexican Springs, New Mexico cowgirl Bailey Bates was one of those winners earning her second championship go-round buckle by turning in a mind-blowing 1.86-second run in the ladies breakaway event. That run bested the 2.29 effort turned in by Thursday night’s leader Shawntaya Murphy.

“Honestly, it was too fast for me to remember,” Bates said. “Coming into this round I really wanted to be quick and I wanted to make sure that I caught my calf.”

Coupled with her first-place run of 2.19 seconds during Wednesday’s round, Bates will compete in Saturday night’s championship round as the ninth high-call back despite missing her calf in the opening round.

“I’m trying to make up some ground,” she said. “That’s why I’ve been so quick, going for the (win) in the go rounds.”

Team ropers Dwight Sells and Ty Romo were just as impressive as they produced a 3.86 run to top the 3.96 effort turned in by Blaine Redhorse and Shawn Murphy Jr.

“I knew we had a good steer and … we just had the same game plan of going at him and try to win the round,” Sells said. “My horse was already winning the round and I couldn’t let my uncle show me up on my own horse so I had to (be) a 3.8.”

In the previous round, the Diné and White Mountain Apache pair won the second round with a 4.59 effort as that run move them up to No. 8 in the aggregate race, which includes a no-time in the opening round.

“Once we got out of the average our goal was to try and win all the rounds we could,” Romo chimed in. “(Thursday) night we seen the guys go 3.9 but we still wanted to do it. I’ve never been a three before so to get it down is pretty awesome.”

In the second round, Elshere split the go-round with Jay Joaquin and Jesse Wilson as the trio rode up for 80 points each. On Friday night, Elshere made it hard for the other contestants to match his 88-point try on Disco Inferno, an Incredi-Bull Bucking Horse product.

“That horse really bucked and he kind of had me struggling there for a second,” Elshere said as he was nearly bucked off right out of the gate.

Nonetheless, the Cheyenne River cowboy regained his footing and spurred his animal to produce the rodeo’s best score thus far.

In the barrel racing, Dodging Horse bettered her previous best by the slimmest margin.

In Wednesday’s second round, Dodging Horse manufactured a first-place run of 14.883 seconds and on Friday she finished with a 14.881 run that also earned her a first-place check.

“It feels real amazing,” Dodging Horse said. “I’ve been working very hard for the past five years with this horse and he’s come a long way this year. He’s been making some nice runs this week.”

Bruised Head, meanwhile, rode Shrek (Muddy Creek Rodeo Company) for 82 points while Shade captured the go-round win in the steer wrestling with a 4.58 effort and Clegg was the victor in the tie-down with an 8.11 effort.