Ral’Shaun Descheny representing Navajos in the classroom and the arena

A month ago, Ral’Shaun was like anybody else taking classes at Diné College. Now he is the only Navajo in his program at Lamar Community College.

“Here at Lamar Community College,” Ral’Shaun said. “They offer a lot of programs, but they are known for horse training management and the equine business management. Right now, I’m the only Native American in this institute. I’m very humble individual out here because I want to set that good example for us Navajos that we blend in with any type of people that are out there and we are the same as them.” 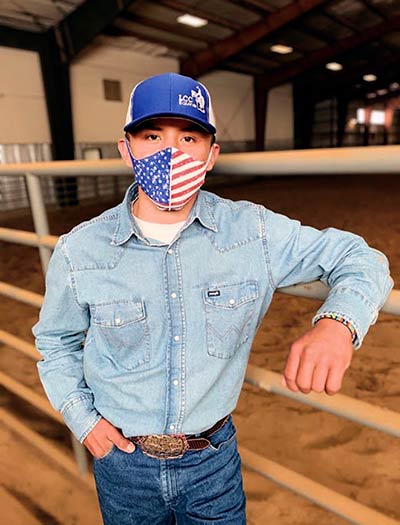 Submitted
Ral’Shaun Descheny is scheduled to start the college rodeo season in the spring competing with the Lamar Community College rodeo team in Colorado.

“That’s what I want to know and want to learn because growing up on the Navajo Reservation we are taught differently how to approach horses and how to train our horses,” Ral’Shaun said. “And coming out here off the reservation, I want to learn the western society way of how it could be done versus our own Navajo tradition. What I want to do after I get these two programs is head back to the Navajo reservation, taking both these degrees with me.

“The reason being is that I love being among livestock and horses because my great-great grandfather, the owner of Circle D ranch. He established the ranch in 1963.”

The ranch started out with nothing but two bulls and three cows. Since then, it has grown to be a successful ranch and is the oldest rodeo grounds on the Navajo Nation.

He also participated in many traditional ceremonies and was taught to follow the Navajo culture. He was very active as a youth, so much so that he started sports back in the fourth grade, beginning with basketball and cross country. Then he learned the importance of education, when he was in his mother’s class, LaShanna Descheny, in elementary school and failed too many assignments and was made ineligible for the basketball championship.

“To this day, from there I learned my lesson, because everything is a lesson,” Ral’Shaun said. “She’s the type of mother that will make you understand what is right and what is wrong.”

He learned how to better manage his time between studying and athletics. He especially got more skilled at this when he got to junior high and added rodeo to his agenda.

“I think preparing him when he was younger from elementary sports and having that mentality,” Lashanna said. “Like being academically ineligible and being able to keep up with his grades, that kind of instilled in him his priorities. So, when he got to junior high it was pretty easy and then when he got to high school it was something, like a normalcy for him. And I know that he always wanted to participate in sports and same thing as a parent being supportive and telling him that if you’re going to do this your grades will have to be reflective of you and I think that’s something you could say he took to heart and he used that as a way of helping the younger kids.”

When he got to high school, he would make the honor roll, the principle’s list and win citizenship awards.

“I wanted to become a successful student athlete,” Ral’Shaun said. “That was my main intention, to inspire others. Not just within myself, but within the community school. I set the tone pretty high with my brothers and my sisters, as they were my strongest support.”

Another strong support for Ral’Shaun was his varsity basketball coach, Melvin Arthur.

“He always possessed a good attitude and also possessed leadership,” Arthur said. “He was able to do a lot more then play, at different times when I was coaching basketball, he wanted to learn more about being a better player and what he could do to excel at the position he was playing, he took the time to be able to get better at shooting and he had to hustle. He was quick, able to play pretty good defense and was able to help his team in that category. I coached him in his senior year…it seemed to me that he changed in a lot of ways in personality. He possessed being able to think about what he wanted to do and how he wanted to do it and I think that might have helped him at Diné college where he was able to accomplish what he did there and was able to move forward to Lamar.”

After graduating from Rock Point in 2020, Ral’Shaun had already made plans to attend Lamar Community College, as they’re renowned for their horse programs. However, due to he COVID-19 pandemic, his family talked him into going to Diné College first. This was in the early days of the pandemic and the public was adapting to the virus.

Ral’Shaun took summer and fall classes online, finishing his general ed with a GPA of 3.82 when he got a call from Lamar’s rodeo coach, Cole Dorenkamp. With the rodeo season starting in spring, he wanted Ral’Shaun to come to the college and be apart of the team, he also personally offered Ral’Shaun a rodeo scholarship that’d pay for his tuition.

“I can tell he has a good work ethic and that’s number one as far as being a good roper in the team and trying hard,” Dorenkamp said. “So, I know he has a good work ethic and not just in the arena but in school also…I know he’s not going to be struggling with schoolwork and when he comes down to practice, he’ll be focused on that. And that’s the other thing, he has a lot of skill with handling a rope, you can tell he’s handled a rope a lot, that’s the other main thing. As far as what I look at and what I saw in him, that’s the main thing. As far as coaching, I want kids who are self-motivated, ready to show up and ready to go to work. He puts in the time, I don’t have to make him, he’s already wanting to get better and wanting to succeed.

The deal was too much to refuse and Ral’Shaun and his family loaded up his rodeo horse, R, and drove the 12-hour trip to Colorado (they made frequent stops so R could stretch his legs.)

It has been three weeks since Ral’Shaun came to the college and already he says he has learned a lot, making friends and staying safe in the classrooms. He is also staying on top of his rodeo practices; he’ll be competing in team roping with their first competition in March.

“The way I would put is that I’d take care of my classes, I maintain all my schoolwork here on the college campus and after I’m done with a majority of everything, then that’s when I have my free time and that’s when I say I’m going to the horse corral, going to maintain my horse and practice,” Ral’Shaun said. “But if I’m lacking in my academics and still have some homework to do then I sit through it and finish it because that’s what it means to me being a student athlete. I can’t just do one assignment and take off when is still have some homework to do. Same with rodeo practice.”

He is also the only Navajo in his program and he is sharing his traditions and insight with his new friends.

“I was roping with this one guy and he said, ‘Wow, I guess it is true that Navajos are the best ropers.’ And I said ‘Of course, because what you’re going to see on the reservation are nothing but basketball hoops and a roping dummy, that’s all you’re going to see,’” Ral’Shaun said.

Ral’Shaun doesn’t just want to learn the non-native way of caring for horses, he wants to blend the teachings together, make something new so that it could benefit the people of the Navajo Nation.

“I think that’s what set him apart,” LaShanna said. “That he really wants to bring back the learning, teaching the kids about animals and being able to also bring back the knowledge of selling animals for trade and that’s why he wants to go into equine business management, he wants to learn about the business side of animals. And as Navajos that what we do, we raise and then we trade and he asked, ‘why do we have to go off the reservation to sell our animals at the sell farm?’ So that kind of interested me as a parent, I never thought of that, and having him have that interest is like wow.”

Ral’Shaun is looking forward to learn something new every day, and when the time comes, he knows he and his new team are going to do great in their first rodeo.

“I just like to say thank you to the community of Round Point and all my family out there, far and near. Each and every one of you played a big role in my life, still are as you’re encouraging me and motivating me, without you guys I wouldn’t have made it. It’s never good-bye, it’s just seen you soon. My heart will always be at Rock point, especially Circle D Ranch.

“To the Navajo Nation we can fight this virus, by doing that we have to, take these baby steps, there’s a light at the end of the tunnel. We’ll see that once again, but with all of that said, thank you to everyone again and happy trails and YD out.”