Fishpoint family trudges onward with no improvement to Wi-Fi 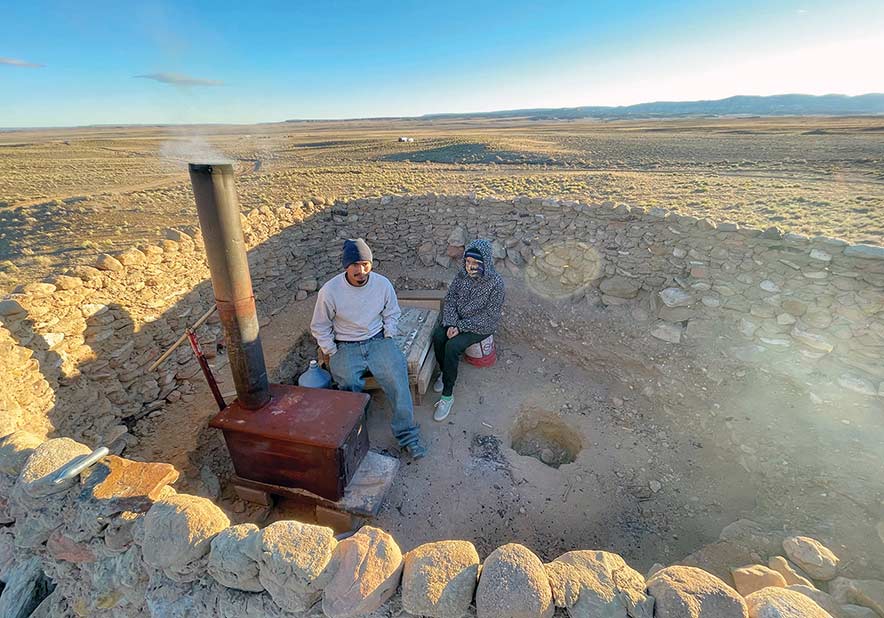 For one family, the belief in “T’áá hwí ájít’éego” has turned a hill – in rain or snow, cold or hot – into a beacon of educational hope.

They were informed the Cottonwood Day School, a BIE school where the daughters were enrolled, would remain closed due to the COVID-19 pandemic, which meant all students would have to do virtual learning.

Their daughters were issued the tablets and a mobile hotspot, both of which require a stable amount of data connectivity. They knew they would be useless at home unless they went to the top of the hill.

Not having transportation to drive five miles down the road to where a school bus with Wi-Fi capability was parked, they knew the hill was the only place they could go to get internet.

The hill, as Carroll and Burbank referred to it, was exclusively used to make phone calls and check text messages. Carroll said there were no plans to construct any kind of structure prior to the pandemic. Not having any cell service or data, before the COVID-19 pandemic, was merely accepted into the family’s daily life.

At the time, the family thought school closures would only last for a few weeks and school would reopen before winter’s cold grip took hold. They decided their best option would be to use the hill as the spot for the kids to attend online classes.

Using stones he collected from around the area, Carroll built an enclosure about two-and-a-half feet tall that kept most of the wind out. By October, even as temperatures were hovering in the 80s, the chill in the air was more noticeable.

Carroll said to keep the kids warm, he hauled a wood stove up to the hill and placed it inside the enclosure on Oct. 21.

It was just in time, too.

The first major cold front hit Carroll’s makeshift classroom on Oct. 27, when temperatures dropped to 14 degrees Fahrenheit, according to the National Weather Service, in Chinle, which is about 20 miles west of their home.

Gusting winds that reached between 40-55 mph also hit the small classroom, giving the kids a taste of what was to come.

But the importance of his children’s education, and wanting them to have a better life than him and their mother, kept Carroll from letting the weather sideline their schooling.

So when he was able to get wood, he hauled it to the top of the hill where he could burn it in the stove he installed.

“We would keep the wood burning for about three hours,” Carroll said.

It wasn’t easy for Carroll to get wood when they ran out. Living in a dry and sparsely vegetated landscape made it very difficult to maintain a constant supply of wood for their makeshift classroom. What he did have was plenty of rocks, so he began reinforcing the family’s classroom with them.

He dug out an extra two feet of earth and then added about another three feet to the wall, giving it more height and depth, keeping the children out of the cold wind. He then mixed water and sand and used it as mortar and pasted closed all of the spaces between the rocks, adding more protection from the elements.

In the first week of November, the National Weather Service forecast the first snowstorm. The snowstorm did not drop much snow, but it brought another round of cold temperatures, bringing school on the hill to a temporary halt.

“During winter it gets tough,” she said. “Right now, because of the pandemic and the buses can’t come, kids are not in school, (and) it’s hard to go out there to where the buses are. I don’t think anyone cares to go up there until things calm down. They don’t want their kids to get sick.”

After the weather warmed up, Carroll and Burbank started using their makeshift classroom once again.

By Nov. 5, around the time when Carroll was improving the structure, the Navajo Nation Department of Health reported 29 communities on the reservation had uncontrolled spread of COVID-19. Chinle and Cottonwood were not on the list.

While the danger of contracting the contagious respiratory virus seemed to have stabilized, the Fishpoint family continued to deal with their schooling woes.

Since March of last year, schools on the reservation have been closed except for online schooling. The Department of Diné Education, in June, conducted a survey asking parents and teachers if they supported online learning.

Citing safety for their children, parents and teachers said they did. BIE schools also held several discussions, with original plans to reopen in September.

That plan was scrapped, and the BIE opted to instead have all of their 60-plus schools on the reservation provide online schooling. The BIE provided 10,000 laptops, 1,000 iPads, and 6,000 mobile hotspots worth $193,000, according to the Federal Procurement Data System.

Carroll said his daughters were issued tablets and a mobile hotspot, which was supposed to be used to connect the tablets to the internet in the comfort of their home.

Instead, because of where they reside, Carroll and Burbank had to resort to exchanging text messages with teachers to get daily instructions.

“People that live in the towns like Chinle, Cottonwood, they don’t worry about these things,” Francis said. “You see them on Facebook. They would be laying on the floor with their laptops connected to their internet, nice and neat, on the floor, going to school and you would see them at the table doing their work with their class.”

According to a budget expenditure report that shows how the $714 million in CARES Act F\funds was spent, more than $53.2 million went to broadband telecommunications. Then in a separate resolution, another $15 million was added. Some 3%, or $1.95 million, remains unspent.

Carroll, Burbank and Francis have not noticed any sudden increase in data speed, nor did they notice any phone signal at their home.

“Even (President) Jonathan Nez, he only gives to food to people that he knows that have rides,” she said. “He knows that they live close to where they can get food. All those same people go over there.

“But what about those people who live way out in the boonies like us and other people that live way off the road?” she asked. “We hardly hear there’s donations going on and we don’t get to see it.”

“It’s same way with the schools right now,” Francis said. “It’s harder for the kids to get and do their schoolwork because we live way out in the boonies, while all the other ones are getting by really good, doing their homework, really good.”

Francis had hoped schools would have reopened by now, but that was dashed. Now she hopes schools on the reservation will reopen by August.