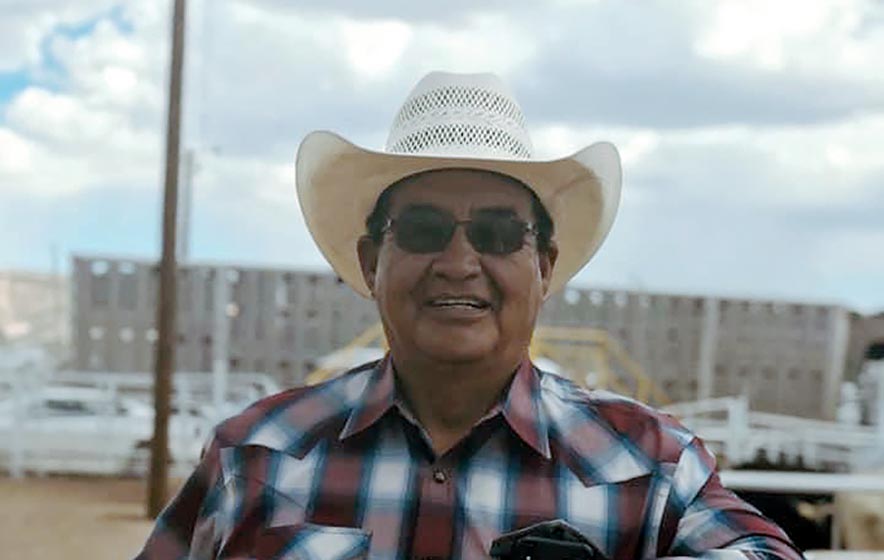 Courtesy photo | Debbie Dennison
Two-time Indian National Finals Rodeo world champion Karl Dennison passed away on Jan. 3 due to COVID-19. Dennison was part of the Navajo Community College (now Diné College) rodeo team in the 1970s before returning to coach the team from 1992 to 2013.

Dennison, who captured the 1978 INFR men’s all-around and the 2010 senior team roping world titles, is being remembered as “an accomplished rodeo athlete, rodeo coach and cattle rancher.”

“Friend to everyone, Karl never met a stranger. He was the type of person who would help anyone,” Karl’s wife, Dr. Debbie Dennison, posted on her Facebook page on Monday.

“Whether it be driving his kids to the rodeo, praying for his family, walking his daughters and granddaughter down the rodeo alleyway, sharing his love of roping and ranching with all his children, Karl lived the cowboy way, every day,” she said. “He supported me and our children in obtaining all levels of education and goals.”

As a collegiate athlete, the Tohatchi, New Mexico, cowboy was part of the Navajo Community College (now Diné College) rodeo team that earned the school’s first berth in the College National Finals Rodeo in Bozeman, Montana, in the 1970s.

Dennison later returned to coach the rodeo team at Diné College from 1992 to 2013. In the midst of that span, he was the “first and only Navajo coach to send his Navajo team to a team championship within the Grand Canyon Region,” according to his wife.

Under his guidance, many cowboys and cowgirls became “champions in the classroom, rodeo arena, and in life,” Debbie Dennison posted.

With his kids – Kyle, Devyn and Kassidy – following in his footsteps, the Dennison siblings qualified for the INFR numerous times with Kassidy winning seven world titles – five women’s all-around (2005, 2008-11) and two in barrel racing (2010 and 2013) – while Devyn captured the 2002 breakaway title.

After a couple of years on the Women’s Professional Rodeo Association circuit, Kassidy qualified for her first Wrangler National Finals Rodeo in 2014.

“He gleamed with pride as he walked her down the WNFR alley at the Thomas and Mack Center in Las Vegas, Nevada,” the post said.

Debbie said Karl was easygoing, as he loved life and the people around him.

“He was honest and genuine, and he always treated people with respect and dignity,” she said. “He would talk to anyone about anything, share a story, or offer humble advice and prayer. His favorite pastime was spending time with his family, horses, and cattle, going to rodeos, and sharing his passions with many.

“He also loved social media and often shared his daily life experiences of the ranch through Snapchat, so we were always connected as a family,” she said.

Due to the circumstances of his death, the family wanted to remind the public about the seriousness of COVID-19 as the virus has infected 23,841 people on the Navajo Nation with 822 deaths as of Monday, according to data compiled by Navajo Nation health officials.

“We ask that you please take the few seconds it takes to wear a mask, social distance, and limit your time out and about,” the post said. “Let’s work to take care of each other and eliminate this virus, even if just to honor Karl’s memory.”

The family acknowledged the outpouring of support as many paid tribute to the rodeo legend.

“Y’all are in my thoughts and prayers during this difficult time,” Carla Wright Cullum said in a post. “He held his Navajo values close to his heart, he taught that to the rodeo youth and collegians and he never met a stranger. Such a good man.”

“Rodeo legend, may his legacy continue on with his children and grandchildren,” Agatha Amos posted on Facebook.

With his unfortunate passing, the family is asking for continued prayers as well as privacy as they mourn.

Funeral services are pending at this time. Karl is survived by his wife Debbie; son Kyle; daughters Devyn and Kassidy; and granddaughter Kennedy.