This year Anna Bahe and her sister Cassie Latham-Bahe competed at the Wrangler National Finals Rodeo for the first time in their careers. This was also the first year that their favored event, breakaway roping, was included in the championships. 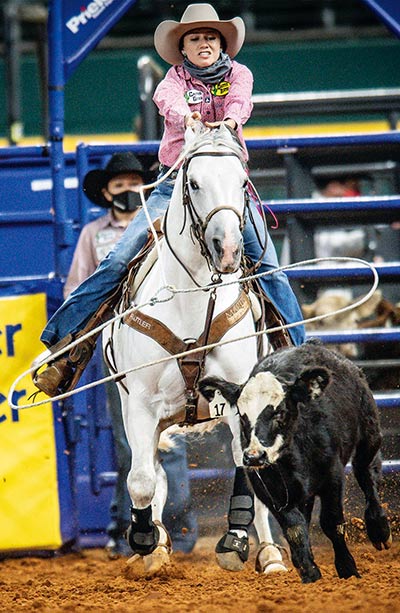 PRCA PRORODEO | Joe Duty
Anna Bahe, a Diné from Grantsville, Utah, recorded a sizzling 1.7-second run during Round 6 at the Wrangler National Finals Rodeo in the breakaway event.

By its conclusion on Dec. 12, Anna would come in 9th place in the world and Cassie in 5th place. Anna won the 6th go-round while splitting the 7th go-round. Making it to the top 10 has sealed their place in NFR history and the Bahe sisters hope to do it again next year.

“It was really cool getting a go-round win. I got a pretty buckle,” Anna said. “I just hope that everyone back home is staying safe from the coronavirus and I was happy to represent the Navajo Nation while competing there.”

With the year 2020 being such a turbulent time for sports due to the COVID-19 pandemic, the sisters were pleasantly surprised to find out they qualified for the breakaway roping competition in the NFR.

Traditionally, the NFR would be held in Las Vegas, but because of the high number of COVID cases in the city, the event was moved to Globe Life Field in Arlington, Texas. Anna was told the large arena was supposed to help people social distance.

Although the pandemic had changed things, it didn’t dampen Anna’s excitement at coming to the finals alongside her sister.

Anna also made history when in the sixth round of the competition she broke the arena’s record by completing her run in 1.7 seconds. She said that is the fastest she has ever completed a round in competition.

“I didn’t think it was that fast,” Anna said. “And then when I saw the time, I was just amazed that I roped in 1.7 [seconds]. That was really cool. Now I hold the arena record there, so that was awesome.”

For the NFR, Anna had borrowed a horse as she recently lost her prime competing horse in November. She borrowed from James Barton who lent her his horse named Boon.

“It was an awesome horse; it was so powerful and fun to ride,” Anna said. “I was very happy he let me borrow his horse and very grateful.”

Throughout the competition, Anna and Cassie would go back and forth in each round, often their times separated just by a few seconds. It’s a natural competition between siblings that, according to a previous interview, has been going on since they were kids.

The sisters are both recent college graduates and hail from the town of Grantsville, Utah. They were taught how to rope by their father, Francis Bahe, who himself was taught by his parents while growing up on the Navajo Nation.

One minor thing about the finals was that while most events were held at night, only the breakaway roping competition was held in the daytime. Although it didn’t affect any of the ropers’ performances, it felt odd not performing alongside the other events.

Anna thinks the NFR was still experimenting with the event; with this being the first year they held breakaway roping and with it not being as popular as the other events they probably weren’t sure how it would go, but she isn’t certain if that’s the reason.

Breakaway roping competition has slowly been growing and the sisters hope it will become more widespread in the future.

For Anna and Cassie, it was a great moment in their careers and one that they, and NFR history, will remember.

“I was just honestly happy to compete there, I was really excited,” Anna said. “And they had a back-number ceremony for us at the Cowgirl Hall of Fame in Fort Worth and that was really cool to get our back-numbers there.”

Anna is confident she and Cassie will be back in the NFR next year and hopes that what she and her sister have accomplished will inspire the next generation of ropers, especially the girls who are interested in breakaway roping.