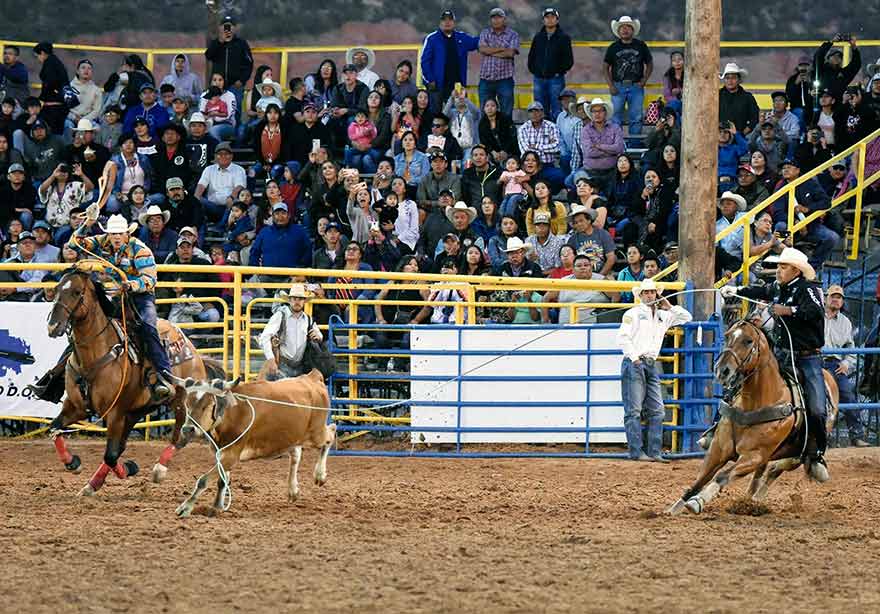 Navajo Times | Ravonelle Yazzie
Team roper Erich Rogers successfully ropes the head of the steer for heeling partner Paden Bray on Saturday at the Navajo Nation Fourth of July Ag Expo and PRCA Rodeo in Window Rock. The pair tied for first with a 4.6 run.

The demands of being a professional team roper never get old for Erich Rogers.

As one of the most traveled cowboys on the PRCA circuit, Rogers says his busy schedule does get hectic at times but it keeps him grounded.

“It does get a little tiring when you have to do some late night driving or waking up early in the morning to catch a flight,” the 2017 PRCA world champion said. “But I like having that busy schedule. It keeps me going. It’s always a good feeling when you get off a plane to go to a rodeo and compete.”

Since the official start of summer last month (June 21), Rogers has been on seven different flights, flying from rodeo to rodeo. All told, he’s competed in a dozen rodeos during a two-week stretch with heeling partner Paden Bray, a 20-year-old Granbury, Texas, cowboy.

“It’s been tough but we’ve had a lot of fun,” Rogers said of their Cowboy Christmas run, which include stops in Ponoka, Alberta, St. Paul, Oregon and Window Rock.

The pair did exceptionally well at those rodeos as they claimed the average titles in Ponoka and St. Paul. On Saturday, the duo turned in a time of 4.6 seconds at the Navajo Nation 4th of July Celebration that earned them a first-place tie with team-roping partners Josh Siggins and Junior Zambrano.

“I was a little off at the barrier but we made a good run with the steer we had,” Rogers said. “I’m just excited that we got to make a good run and to split the ‘W’ here in Window Rock, my hometown rodeo.”

Before the start of Saturday night’s final performance, Rogers and WPRA barrel racer Kassidy Dennison drew the biggest applause during introductions before a packed house.

The three-day rodeo was complimentary – free admission – with the Navajo Gaming Enterprise, CKP Insurance and the Division of Economic Development covering the cost.

“It’s amazing to see all these people pack the stands,” Rogers said. “It’s awesome that the fair let everyone in with free admission. They got to watch and partake in the rodeo.”