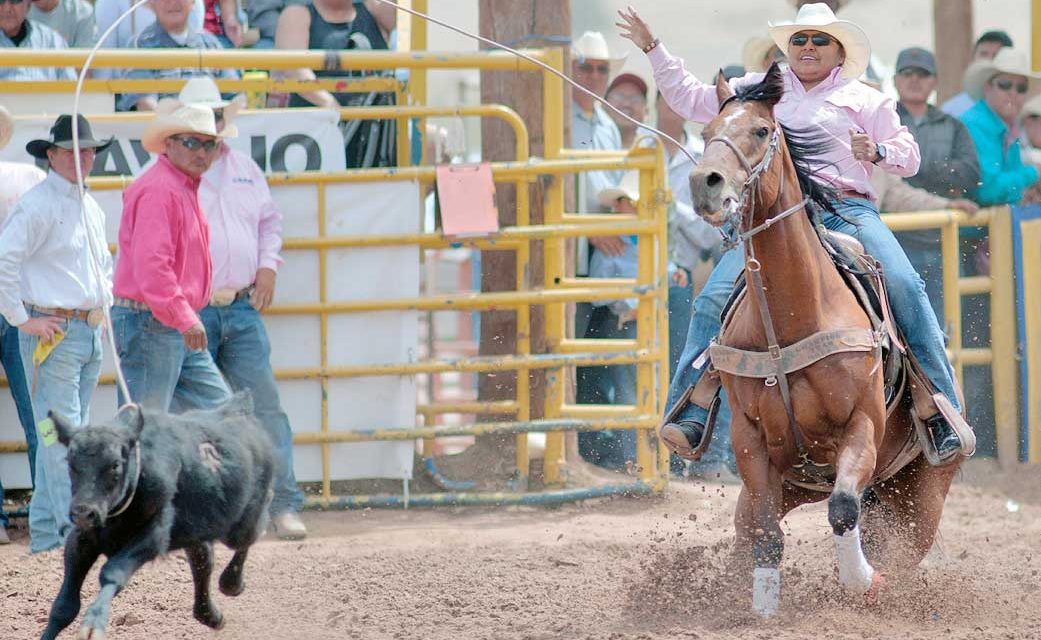 Breakaway roper Odessa Yazzie of Brimhall, N.M., quickly stops her horse after she ropes her calf on Sunday. Yazzie won the average and Final Four round during the 68th annual Navajo Nation Fair in Window Rock. (Times photo - Donovan Quintero.)

ABOVE: Breakaway roper Odessa Yazzie of Brimhall, N.M., quickly stops her horse after she ropes her calf on Sunday. Yazzie won the average and Final Four round during the 68th annual Navajo Nation Fair in Window Rock. (Times photo – Donovan Quintero.)

Given the pressure building nature of competing on the final day of the Navajo Nation Fair, the last thing you want to do is abandon your mechanics.

For Odessa Yazzie and Autumnrain Chee they stuck with the fundamentals and kept things simple, as they emerged as the average and Final Four winners in their respective events at this year’s fair.

Both cowgirls put together business-like performances in Sunday’s performance with Yazzie topping the breakaway field while Chee surfaced as the barrel-racing champ.

“I’m not going to lie to you, it gets pretty nerve-wracking out there,” Chee said. “One simple mistake can cost you but I thought that my horse ran a smart race. He had more speed and he was more flexible today than he was the first two rounds.”

That assessment was quite noticeable as the Cortez, Colo., cowgirl was the only competitor to turn in two runs that were under the 18-second mark. She recorded a 17.73 run in the short round before she ended her weeklong haul of $5,268.78 with a 17.82 run in the Final Four, which added $2,000 to her bank account.

Needless to say, she had to work for it.

Going into Sunday’s short-round performance, Yazzie had roped two draws in 4.7 seconds and held a slight edge over Serena Dahozy and Latasha Long as the latter two had a 5.6 and 6.3 aggregate entering the final day.

As the third high call-back, Long ($1.653.57) went for it and roped her calf in 3.8 seconds, which put her in a two-way tie with Danille Lowman for the lead in the short round.

But in a ridiculous fashion, Dahozy ($2,544.64) took it a step further and bettered that run with a sizzling time of 2.8 seconds.

The lead, however, switched hands again as Yazzie took a few swings and roped her draw in 2.5 seconds, which earned her the first place check of $800 in the short round as well as the title.

“The pressure was there but I didn’t let it get to me,” Yazzie said. “I wasn’t trying to get out fast but I just wanted to get out and rope hard.”