Autumn Petersen has seen a quick return on the offensive production she desired. 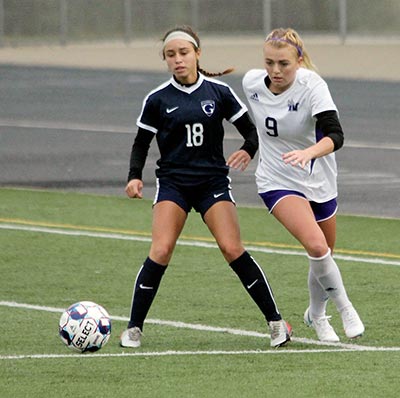 A transfer from Otero Junior College before her sophomore year, the 5-foot-4 junior has been playing outside midfielder or outside forward. Last year she had two assists in starting 12 of the 14 games she played.

“Her pace is always a reliable source for us,” Arenas said. “She’s definitely taken on a leadership role.”

In the opener she had an assist and in the next game recorded her first college hat trick, as Waldorf won each game.

“I knew I was going to push forward and try to score as much as I can,” Petersen said about the second game, when she had two goals by halftime. “That was really exciting for me.”

Though naturally right-footed, she scored all three off her left foot. She has had plenty of time to improve her left foot, however, because she said, “Ever since high school, I played on the left wing.”

On the first goal, Arenas said she beat an opponent off the dribble.

“It was an outstanding shot,” he said.

She fielded a corner kick and tapped that in for her next score. For the third goal, she again beat an opponent off the dribble and from the left side unleashed a shot that found the bottom right corner of the net.

“It went through her hands,” Petersen said.

She spent the summer building her endurance for this season, running two miles daily on a treadmill or outside.

“Mostly staying fit for the season,” she said. “Compared to last year, I didn’t get as burned out in the first half. It has helped me a lot in pushing forward and scoring goals.”

Despite her slight size, she matches up well against opponents.

“The physicality she brings to the game,” Arenas said. “She is an unbelievably athletic player. She will not back down.

“We high-press teams,” he said. “She is fast and strong and forces turnovers.”

Petersen said the team has been able to stay more in the opponent’s half of the field because of the offensive pressure. Waldorf had 37 shots in its first two games, compared with 17 through two – both shutout losses – last year.

“We had way more scoring opportunities,” she said.