Lynx overcome injuries to get toehold in district 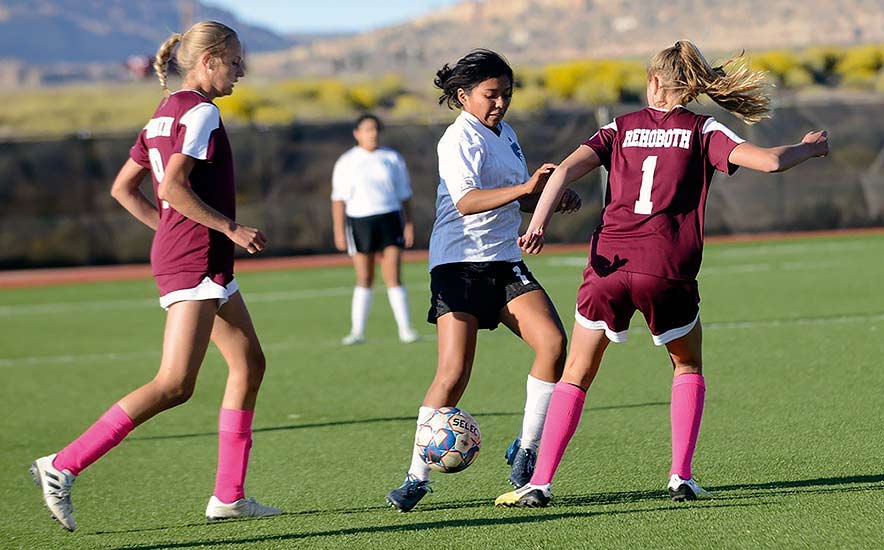 The Rehoboth Lady Lynx have battled injuries and inexperience all season long, but they were still able to get a district win last week, overcoming a slow start to score two late goals in a 2-1 come-from behind win over Navajo Prep last Thursday at Rehoboth High School.

“We have had a few injuries,” said Rehoboth head coach James Rich. “So we had to put a few players in positions they were new to.”

The Lady Lynx followed up the win with a 2-1 loss at Show Low Saturday, but Rich said the team continues to work hard and continues to improve.

“We have a lot of inexperienced players on the team,” Prep head coach Stacy Irwin said. “When we started the season there were some girls that had never even touched a soccer ball.”

Irwin added that getting experience now will help the younger players, while even the seniors that are new to the sport continue to improve.

“We have seniors that before this season never played,” he said. “They wish they had started sooner.”

Against the Lady Lynx, Navajo Prep jumped out to a 1-0 lead in the first half, but they could not hold the advantage, as Rehoboth scored a pair of goals in the final 15 minutes to pull out the win.

With about 15 left in the game, Grace Huizinga put the Lynx on the board with a score off a pass from Shandiin Tahy.

Then, with under five minutes left Iliana Andrade put in a score off a pass from Maddie Arsenault to put the Lynx ahead for good.

For Rehoboth, Kora Zylstra had nine saves at goalie.

In their weekend game, the Lady Lynx were unable to repeat the effort in their loss to Show Low.