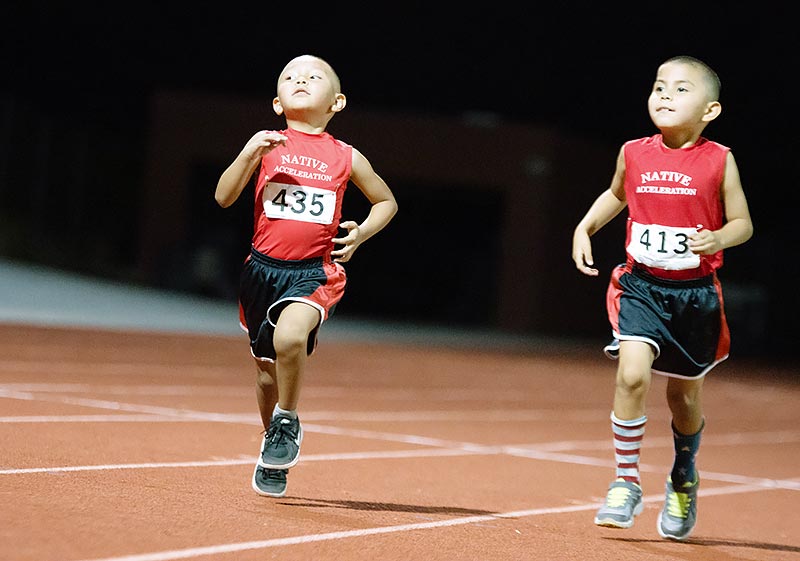 Members of the Native Acceleration track team outnumbered the other participants at this year’s Lori Piestewa National Native American Games.

Of the 58 participants, 32 were from the Native Acceleration team ranging from 4 to 20 years old. The team is coached by Nicholas Lewis, a former track and football standout at Haskell Indian Nations University in Lawrence, Kansas.

The Piestewa Games had about 3,200 athletes in seven different sports with the track meet taking place at Fountain Hills High School on Saturday night.

Lewis, who is a member of the Tohono O’odham Indian Nation, started his summer track program as a way to get Native American kids interested in track since he only saw a small handful of athletes join the track team at his alma mater at Florence High School, where he served as an assistant coach.

“Going to track meets, I noticed that the local schools in my area there were not too many Native American kids participating,” Lewis said.
And while there were a select few, Lewis wanted to influence more kids to get interested in the sport of track and the only way to go about that was to coach them.

“I teach these kids the basics in what it’s like to be on a track and field team so that way when they can go back to their schools they will be more willing to try it out,” Lewis said.

Lewis founded his program six years ago and they used the Sacaton Middle School as a place to train and hone their skills. Initially, he started his program with six team members and two of those members are still with him.

“One thing I love about this track team is it’s my second family,” said Kayola Denny, a recent graduate at St. Michael High School. “I started with coach Lewis when I was 12 years old and it’s grown every since then. Now he considers me as his own daughter.”